Marie Curie was born this day in 1867. You might know her as a pioneering chemist and physicist -- the first woman in Europe to receive a Ph.D. in physics. She was also the first woman to win a Nobel Prize for her research in radioactivity, and the first person ever to win two Nobels. But have you heard about what she did to help during World War I? Do you know about the salacious gossip she stirred up with her sex life?

Who was the real Marie Curie, and what was she like? Here are ten facts that might surprise you:

FACT #1. She was a whiz kid. Marie, born Maria "Manya" Salomea Skłodowska, graduated from high school at age 15. She was first in her class. 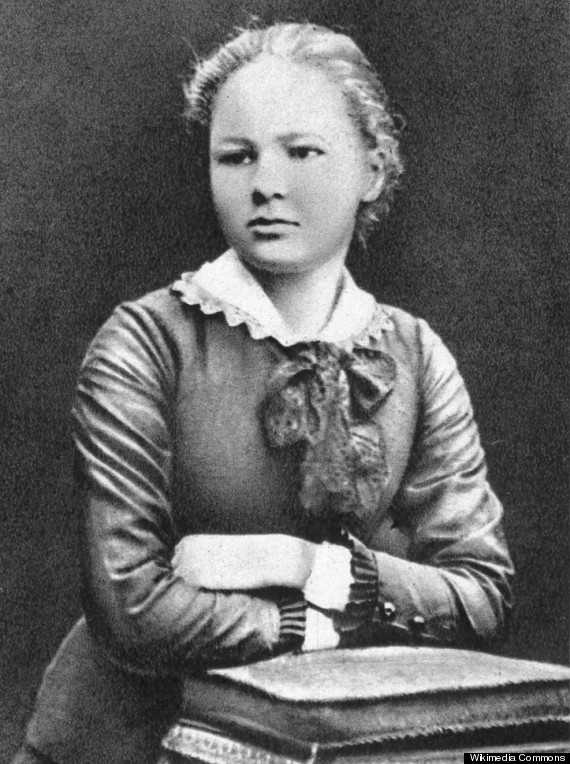 FACT #2. She was a rebel. Maria let nothing stand in the way of her education. After high school, in the 1880s, she attended Warsaw's "Floating University," an illegal, underground night school run by a handful of young Poles. Classes met in changing locations to avoid discovery by the Czarist authorities. Once Maria had the funds, she headed to France to study at the Sorbonne, since women could not attend university in Poland. This is when she changed her name to its French version, Marie. She lived with her sister and brother-in-law, Dr. Kazimierz Dluski, who noted Marie's independent spirit in a brusque letter to her father:

Ms. Marie works very diligently. She spends nearly all day at the Sorbonne, we usually only see her in the evening. She is a very independent person, therefore though you named me her official guardian, she not only shows me little respect, but also refuses to listen. She cares about my authority as much as she would care about a torn shoe.

FACT #3. Science ran in the family. Her grandfather was a physics and chemistry teacher and her father taught physics and math. Marie's daughter Irène Joliot-Curie continued her work, winning a Nobel Prize for Chemistry along with her husband, Frédéric Joliot-Curie, for their discovery of artificial radioactivity. And today, Irène's children are both esteemed scientists -- Hélène Langevin-Joliot is a nuclear physicist and Pierre Joliot-Curie a biologist.

FACT #4. She married her lab partner. Looking for a place to do her own research in 1894, Marie was introduced to chemist Pierre Curie, lab director of the Municipal School of Industrial Physics and Chemistry in Paris. Pierre cleared a space for her in the lab, and the two hit it off. According to Marie, “Our work drew us closer and closer, until we were both convinced that neither of us could find a better life companion.”

In a love letter to Marie, Pierre wrote:

The two were married in the summer of 1895. Marie wore a dark blue outfit that she continued to wear in her lab for years afterward. 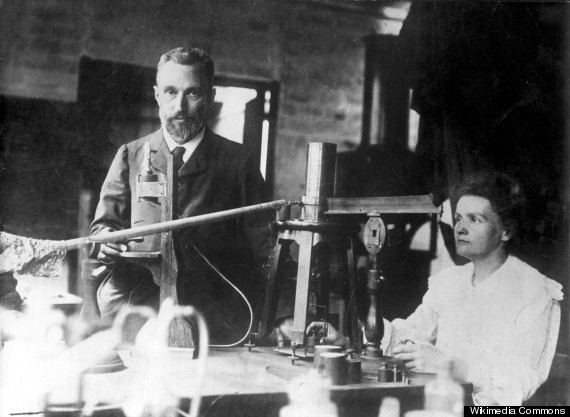 Pierre and Marie Curie in the laboratory.

FACT #5. She pitched in during World War I. In 1914, Marie put together a fleet of vehicles carrying portable X-ray machines, called "Petites Curies." These machines helped doctors image broken bones, shrapnel and bullets in patients on the front lines. 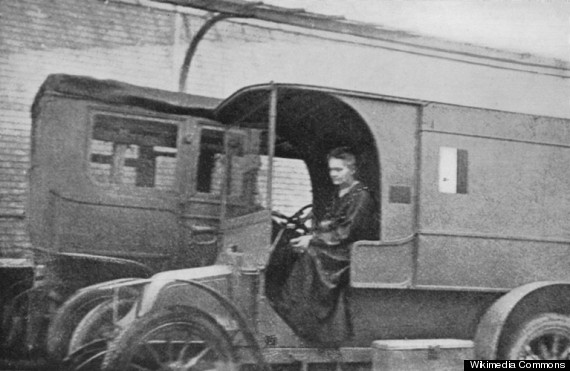 Marie Curie in a "Petite Curie," a mobile X-ray vehicle.

FACT #6. She vacationed with Einstein. In 1950, when asked which physicists he admired the most, Einstein picked Hendrik Lorentz, and Marie Curie. Marie and Einstein met in 1909 and remained colleagues and friends for nearly 25 years. They attended many scientific conferences together and even took their families hiking together in the Swiss Alps. 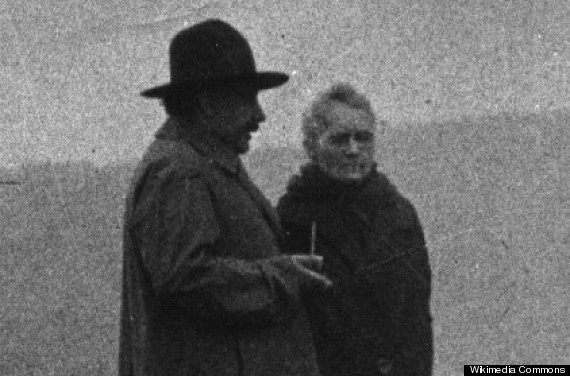 FACT #7. She found a silver lining in widowhood. In 1906, Pierre was killed in a tragic street accident. Although deeply saddened, Marie moved forward with her work, taking over Pierre's post in the physics department to become the first female professor at the Sorbonne. In 1911, she was the only woman at the world's first international meeting of physicist and chemists, the Solvay Conference in Belgium. 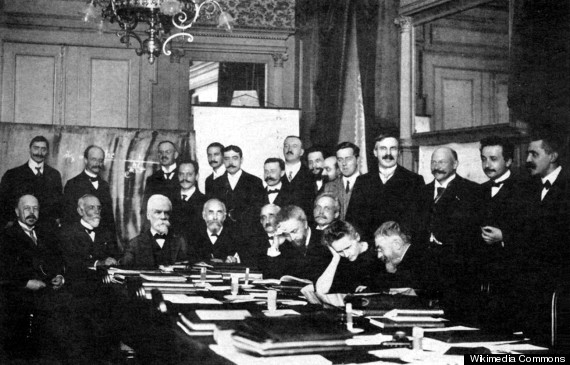 Photograph of participants of the first Solvay Conference, in 1911, Brussels, Belgium. Marie Curie is seated next to Henri Poincaré. Standing behind them to the far right are Albert Einstein and Paul Langevin. Other notable scientists included in the photograph are Max Planck, Hendrik Lorentz and Ernest Rutherford.

FACT #8. She was a homewrecker. In 1910, four years after Pierre died, she began a romantic relationship with Paul Langevin, one of Pierre's former students. Langevin was married with four children, so the lovers rented a secret flat in Paris for their trysts. Eventually, Langevin's wife reported the pair to the press after allegedly discovering passionate letters exchanged by the lovers. Only a few days before Marie was set to receive her second Nobel, members of the prize committee asked her not to come accept her award in Stockholm in person.

She disregarded the warning, stating simply:

The prize has been awarded for the discovery of radium and polonium. I believe that there is no connection between my scientific work and the facts of private life. I cannot accept ... that the appreciation of the value of scientific work should be influenced by libel and slander concerning private life.

Still, the relationship between Marie and Langevin ended -- but in a twist of fate, two generations later, Langevin's grandson and Curie's granddaughter got hitched. 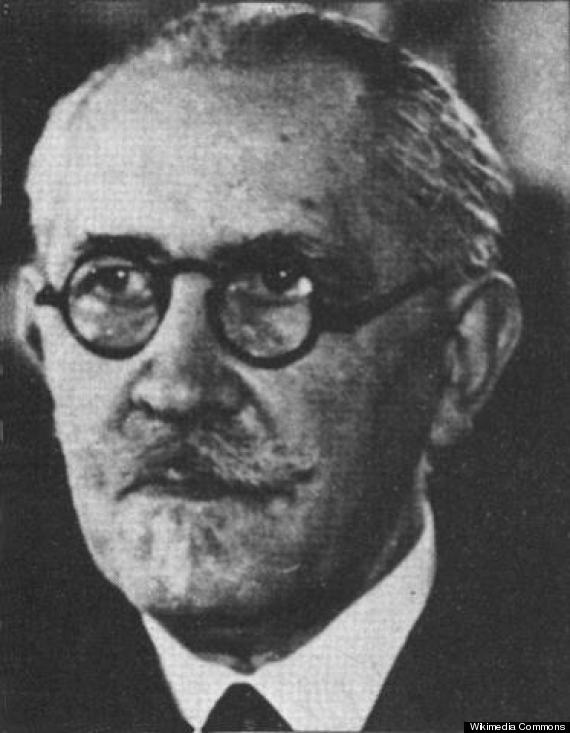 FACT #9. America's president gave her a "hot" gift. In 1921, Marie Curie took her first trip to the United States, touring the country from New York City to Chicago to Washington, D.C. On behalf of millions of American women who chipped in, President Harding presented Marie with a gram of radium worth more than $100,000. "We greet you as foremost among scientists in the age of science, as leader among women in the generation which sees woman come tardily into her own," Harding said.

FACT #10. She was a martyr for science -- but maybe not in the way you would expect. On July 4, 1934, she died of aplastic anemia, a rare blood disease. For years, many assumed her death was caused by years of exposure to radiation from working with radium. But in 1995, a radiology expert tested her remains and found that radiation levels were low -- leading scientists to speculate that her early death may have been caused by her work with X-rays during World War I. 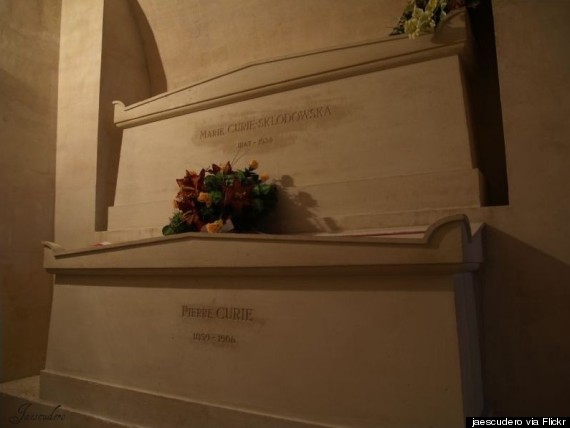 Marie and Pierre's crypt in the Pantheon, a distinguished mausoleum in Paris. Marie was the first woman to be buried there on her own merit.