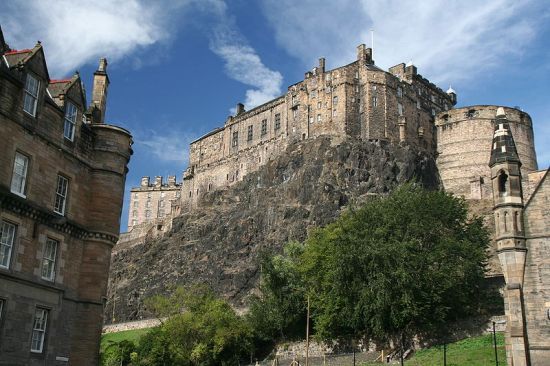 With its Old and New Towns constituting a UNESCO World Heritage Site and an international arts festival that attracts millions of people each year, it's little wonder that many visitors to the Scottish capital Edinburgh choose to devote their energy to the city rather than exploring the surrounding area. But for those who do manage to venture out of town, here are ten must-see places that are easily accessible by car or public transport and range from the birthplace of the Scottish saltire and the scene of notorious 16th century witch trials to the home of Rugby Sevens.

Less than an hour's drive or train ride from Edinburgh and dominated by an imposing medieval stronghold, the small yet strategically important city of Stirling guards the "gateway to the Highlands." Besieged no less than eight times by English and Scottish armies alike, Mary Queen of Scots was crowned there in 1542 and the current buildings -- most of them constructed between 1490 and 1600 -- showcase an eclectic mix of architectural disciplines that reflect the international ambitions of the House of Stewart. Other nearby attractions include the Church of the Holy Rude, Old Town Jail, Wallace Monument and Bannockburn - the site of one of Scotland's most famous battles, where Robert the Bruce defeated a formidable English army in 1314.

Seventeen miles from Edinburgh, stretching from the coastal village of Aberlady to the town of Gullane in East Lothian, is Aberlady Bay, a vast sandy beach skirted by expansive wetlands. Teeming with wildlife, the coastline was designated the UK's first Local Nature Reserve in 1952. But perhaps the most intriguing attractions of Aberlady Bay are the wrecks of two XT-class midget submarines, which have been visible at low tide since 1946. Developed for the Royal Navy as training versions of the operational X-craft subs that played a key role in crippling the German battleship Tirpitz, the vessels were used for target practice after World War Two before their wrecks were abandoned on the beach. Semi-submerged in the sand, they remain accessible at low tide.

Known worldwide as the 'Home of Golf,' the medieval town of St Andrews boasts the third oldest university in the English-speaking world and the largest cathedral in Scotland, which today lies in ruins. St Andrews University was founded in 1413 and remains one of the world's most pre-eminent educational institutions, attended by Royals including Prince William and Kate Middleton. Visitors to the St Andrews Museum can view permanent and temporary exhibitions chronicling the town's history from its founding to the present day. Nearby, the British Golf Museum boasts interactive displays charting 500 years of the sport, while the Old Course is one of the oldest and most famous golf courses in the world.

The picturesque Borders town of Melrose grew up around the magnificent Cistercian abbey founded in 1136, at the behest of King David I, by monks from Rievaulx Abbey in North Yorkshire. Considered by many to be one of the most impressive monastic ruins in Britain, Melrose Abbey is the final resting place of King Robert the Bruce's heart, which was embalmed and encased in a lead casket following his death on June 7, 1329 at the Manor of Cardross near Dumbarton. Damaged and rebuilt several times over the centuries, the ruined abbey is now maintained by Historic Scotland. Nestled beneath the triple peaks of the Eildon Hills, the town of Melrose is also notable as the birthplace of Rugby Sevens.

Just four miles from the centre of Edinburgh is the seaside village of Cramond, located at the mouth of the River Almond on the south bank of the Firth of Forth. Home to the remains of a Roman fort, built around 142 AD, the medieval Cramond Tower and a 17th century kirk, this pleasant cluster of dwellings within suburban Edinburgh has a rich history spanning almost two thousand years. Scottish economist John Law was born there in 1671, and Cramond House is thought to have been the inspiration for the 'House of Shaws' in Robert Louis Stevenson's novel Kidnapped, published two centuries later. At the heart of the village is the harbour, which once carried steel from Cramond's three iron forges to far flung corners of the world, and is primarily used by leisure boats today.

Carved out by glaciers and upland streams over thousands of years, the Pentland Hills to the south-west of Edinburgh cover 90 square kilometres and rise to 579m at their highest point - Scald Law. Hiking, cycling, horse riding and fishing are among a number of popular activities in the park, which runs for about 20 miles from Edinburgh to the upper Clydesdale. Near the summit of Hare Hill at an altitude of 400m lies the shattered wreckage of a German Ju-88 bomber, which crashed on March 25, 1943 during a raid on Leith docks. To the north-east just off the A702 is the Flotterstone Inn, a popular establishment with weary hikers conveniently located near one of several visitor centres.

Popularised by the likes of Dan Brown, Rosslyn Chapel may not be the resting place of the Holy Grail but few would dispute the mystery and magnificence of the building. Founded in the mid-15th century by William Sinclair, 1st Earl of Caithness, the chapel stands on a hill overlooking Roslin Glen, just 20 minutes by car from central Edinburgh. Originally known as the Collegiate Chapel of St Matthew, Rosslyn's intricate carvings incorporate biblical and pagan symbolism alongside New World imagery that allegedly pre-dates the voyage of Columbus. Some advocate the presence of masonic elements linked to the shadowy Knights Templar, while others dismiss such connections as false and posit that any alleged masonic symbolism was likely added later. Whatever the truth, there's little doubt that Rosslyn's stonemasons produced one of the finest chapels of its kind in Europe that continues to draw tourists from across the world.

Twenty miles east of Edinburgh near the town of Haddington, this characteristic Scottish village is home to a red telephone kiosk converted into a 'book nook' and, more significantly, is said to be the place where the Scottish saltire was first adopted. Popular legend tells that in 832 AD, a vision of St Andrew - crucified on a diagonal cross - appeared before Pictish King Óengus II promising victory on the eve of battle against invading Angles. Sure enough, the following day the Picts defeated the Angles, allegedly after seeing the white cross formed by clouds against a blue sky. Angle leader Athelstan - from whom the village takes its name - was killed as he retreated south. Athelstaneford is now home to the National Heritage Flag Centre.

North Berwick may not have St Andrews' golfing pedigree, but nevertheless boasts what is thought to be one of the oldest golf clubs in the world, opened in 1832. Best known for the Bass Rock nature reserve located two miles offshore in the Firth of Forth, this pretty harbour village became fashionable with 19th century tourists and remains a popular holiday spot today. The harbour dates back to the 12th century and for 500 years a ferry operated between North Berwick and Earlsferry, Fife, transporting pilgrims bound for St Andrews across the Firth of Forth. A darker side of the town's history is reflected in the North Berwick Witch Trials of the 16th century. The most notorious trial was that of Agnes Sampson, who was accused of conjuring a storm while King James VI of Scotland was sailing across the North Sea with his bride Anne of Denmark. In 1591, Sampson was duly found guilty of witchcraft and burned at the stake in the presence of the king himself.

Twenty miles west of Edinburgh, the ancient town of Linlithgow is dominated by the palace of the same name, which served as the principal residence of the Scottish monarchs during the 15th and 16th centuries. Most notable as the birthplace of King James V and later Mary, Queen of Scots, Linlithgow Palace fell into disuse when the Royal Court moved to England after the Union of the Crowns in 1603. The end came almost 150 years later after Bonnie Prince Charlie visited Linlithgow during the Jacobite rising of 1745. The following year, "Butcher" Cumberland's army set fire to the palace. Though gutted in the blaze, the burnt-out shell endured and is considered one of the finest surviving buildings of its kind in Scotland. The nearby high street also boasts a number of historic buildings, including wynds and closes like those found in Edinburgh's Old Town.