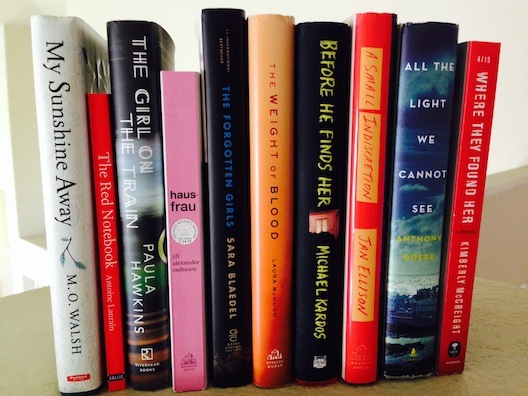 I've been reading a ton lately, which makes me happy since I remember what it was like to go through that awful "can't read" period. Despite a ridiculous schedule, I've carved out time to read every day and it's made me a little more sane.

I no longer feel the need to finish every book I start, so if it doesn't grab me right away, I'm on to the next one without feeling the least bit guilty.

I know that none of you have time for books that won't hold your attention, so if you're looking for a great book for a weekend escape -- or just an escape from everyday life -- here are my recommendations.

The Red Notebook by Antoine Laurain

I turned so many people on to Laurain's last book, The President's Hat, and we are now all obsessed with the French author. His engaging style is apparent on every page of this short but profound novel. This time around, bookseller Laurent Letellier finds a purse which contains a journal that makes him want to meet the woman who wrote it. Another little gem from a master storyteller.

My Sunshine Away by M.O. Walsh

Proof that you can judge a book by its cover, this debut novel is a beauty. A coming-of-age tale that's part mystery, part family drama, part love story, it begs to be read slowly -- as languid as the Louisiana summer in which the crime that changes everything takes place. I adored this novel right down to its breathtaking last page, which gives me hope for the future of mankind.

It's hard not to get sucked into a book that begins, "Anna was a good wife, mostly." It's that "mostly," of course, that makes the story so interesting. Anna is a difficult character to figure out -- she's more than simply a bored housewife looking for excitement outside her marriage and she obviously needs more help than her therapist is able to provide -- and I was rooting for her, even when I wanted to shake her. Because Essbaum is an award-winning poet, the writing is atmospheric and evocative, and when I read the last line, I felt a chill.

The Girl on the Train by Paula Hawkins

Everyone is talking about this book and comparing it to Gone Girl so, of course, I couldn't wait to dig in. I love the premise -- a woman who takes the commuter train every day gets to "know" the people in the houses she passes, and sees something shocking one day during her morning ride. She gets the police involved and also gets herself involved. The book is full of unreliable narrators and unlikeable characters, and it's really not like Gone Girl at all. I kept reading because I couldn't imagine how it was going to be tied up but, ultimately, I was disappointed. You should read it, though, because, really, I couldn't put it down. It could make a great movie.

All the Light We Cannot See by Anthony Doerr

Okay, I was late to the party on this one but I totally understand why everyone's been gushing over this novel. It's gorgeous. Doerr interweaves the stories of Marie-Laure, a blind French girl who lives with her beloved father, and Werner, an orphaned German boy, as they experience the destruction of World War II in their own ways. It will have you in tears -- of sadness for the tragic loss of life, of joy for the beauty and humanity that can be found even in the worst situations, and of awe that someone can write like this.

A Small Indiscretion by Jan Ellison

How do the choices we make when we're young affect our lives and relationships later on? That's the question Ellison explores so powerfully in this debut novel about a marriage built on the sin of omission. When Annie receives a photo from her past, it reignites her old passions, leading to a series of events which threaten to destroy her family. This is a thought-provoking read.

Where They Found Her by Kimberly McCreight

Reconstructing Amelia was one of my favorite books of 2013 so I was eager for the author's new thriller. When an infant's body is found in a small college town, newbie reporter Molly is sent to cover the story. Having recently suffered a late-term miscarriage herself, the story cuts close to home and she finds herself invested in discovering the truth. Although this is no Reconstructing Amelia, it definitely kept me intrigued.

The Weight of Blood by Laura McHugh

Creepy, in a page-turning way, this gritty novel about the secrets of a rural Ozark Mountain town had me riveted, hoping for a somewhat happy ending. After her friend is murdered, Lucy -- haunted by the mystery of her mother, who disappeared when she was a little girl -- sets out to discover what is actually being hidden in the hills. A powerful debut, this is a disturbing, important story that perfectly captures its setting.

Before He Finds Her by Michael Kardos

To me, a good thriller is more psychological than action-based, and this one is a great example of that. Melanie (not her real name) has been living with her guardians under the Witness Protection Program for 15 years, since the night her father killed her mother -- and, in the public's mind -- her. Tired of hiding, she decides to face reality and find her father before he finds her. The compelling story is suspenseful, fast-paced and why they invented the term "nail-biter."

The Forgotten Girls by Sara Blaedel

No wonder Sara Blaedel was voted Denmark's most popular author for the fourth time last year. I have a thing for Danish crime novels, in general, and this one, in particular. Detective Louise Rick is charged with investigating the death of an unidentified woman, whose body has been found in the woods where Louise grew up. This leads to a fascinating exploration of mid-century mental institutions which had me horrified but wanting to learn more. I'm glad to report this is the first book in a trilogy about Louise, because that means there will be more coming soon.

Get more book recommendations from Lois on Midlife at the Oasis.