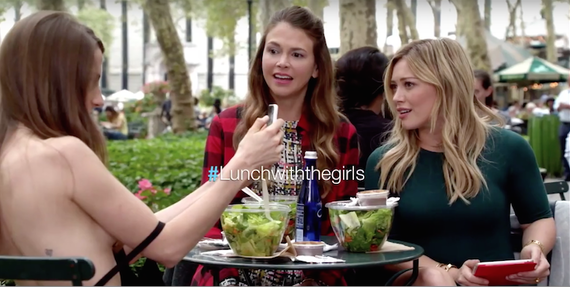 Hey, you! Yes, you! Are you watching Younger on TVLand?

If you are, you know the cable network's smash hit series follows 40-year-old Liza Miller (New York theatre fave Sutton Foster), who must navigate life as a 26-year-old, after successfully selling herself as one to win a job at Empirical Publishing House. You know the show, created by Sex and the City's Darren Starr, delightfully mixes ROFL scenes with poignant moments and, of course, suspenseful cliffhangers -- what the hell happened last week?! -- as Liza continues to avoid getting caught.

But in addition to all the great nuances in the writing, if you're a weekly watcher like me, you know that -- presumably because Starr's at the helm -- Younger is also an ode to New York City, with various characters referencing several New York locations each week. These are indeed real-life locales that are open to the public -- and that YOU can visit if and when you come to New York!!

So, with that in mind -- and with the second season finale upon us -- I've compiled a list of ten hotspots that have been name-dropped and/or featured throughout the past two seasons of the show, complete with all the relevant information you need to get yourself there. Read on, find your favorites, and then, go check them out!! Have a New York adventure! Happy trails, everyone!!

Bryant Park
Behind the New York Public Library, btwn. 40th & 42nd Streets, and 5th & 6th Aves., New York, NY
Liza and Kelsey stop here to have lunch in the outdoor picnic area with Lauren (and the girls... LOL) in Season 1, Ep. 2. When you visit, you may also choose to have lunch here, or you can grab a bite at the nearby Bryant Park Grill, Bryant Park Café, or the sandwich joint, 'wichcraft. You may also choose not to eat at all -- and no worries, there are a plentitude of other options and activities available for you at Bryant Park. In the summer, you can take a ride on the famed Le Carrousel, situated in the center of the park. There are also free movie screenings on summer evenings, and -- for you theatre lovers -- the Broadway in Bryant Park concert series, also free of charge. Take in a free audio tour of the park -- narrated by Matthew Broderick, no less -- or head to the open air Bryant Park Reading Room to relax with a good book. In the winter, enjoy an afternoon of ice skating at The Rink at Bryant Park (open Oct.-March. See site for details). Food kiosks, an art cart, and of course, the wide open lawn round out Bryant Park's array of offerings. Run by the not-for-profit Bryant Park Corporation; all programming and maintenance is privately funded for public benefit. For more, visit www.bryantpark.org.

P. S. The girls are eating from Chop't, which you should also check out, because their salads are DELICIOUS!

Brooklyn Bridge Park
2 Old Fulton St, Brooklyn, NY 11201
This one isn't confirmed in the show, but I assume it's where Liza and Josh play dodgeball in Season 1, Ep. 9, as they walk away post-game with the Brooklyn Bridge behind them. A good guess, don't you think? A waterfront park alongside the East River, Brooklyn Bridge Park is a great "city escape" on any day of the year. Take in the gorgeous, can't-be-beat views of the Brooklyn Bridge, the Manhattan skyline, or the Statue of Liberty (among others), or sit out on the lawn and enjoy a summertime concert, or film during their Outdoor Movie Nights. Multiple fields and courts are available to suit sports of all kinds, including soccer, basketball, volleyball and bocce ball; there's even a pop-up pool for you swimmers! Visitors may also opt to ride Jane's Carousel, which opened operations in 2011. (Fun fact: It's the first Carousel to be placed on the National Register of Historic Places). Playgrounds are available for the little ones; for those older, there are bike and jogging paths. Whatever you enjoy, you're sure to find something you love at Brooklyn Bridge Park! For more, www.brooklynbridgepark.com.

Sockerbit
89 Christopher Street, New York, NY
This is the candy store to which Anton takes Kelsey in Season 1, Ep. 7, so that she can experience "real Swedish fish" after Diana suggests sending the artificial American kind along with his book.
An actual Swedish candy store located in the West Village, Sockerbit offers -- according to their website -- the best in smågodis, or "small candy," from licorice and marshmallows to chocolates and hard candies. Customers may buy candies in bulk -- $12.99 per pound -- or boxed/indivually pre-wrapped. Other Scandinavian food items, such as limpa bread and meatballs, are also available. Considering it was voted by New York Magazine as "A Great Place to Take Your Date," it totally makes sense why Anton took Kelsey there. If only he wasn't committing adultery. Sockerbit has a second location open in West Hollywood, CA. For more, visit www.sockerbit.com.

East River Bar
97 South 6th Street, Brooklyn, NY
Josh texts Liza to meet him here in the second season premiere... before he tells her he "can't make it work." (He also invites her here in Season 2, Ep. 8, while shooting his T Magazine piece, but she declines out of fear of getting caught). Voted Best Dive Bar by City Search, the East River Bar a great place to grab a drink with friends (or a date) and shoot some pool in the back room. TVs located inside for sporting events. According to Yelp, customers praise the "exceptional staff" as well as the 1,000 square-foot patio and grills out back. The venue hosts seasonal "Food Fests" and BYOBBQ (Bring Your Own BBQ). Space available to rent for parties. For more, visit www.eastriverbar.com.

GATO
324 Lafayette Street (btwn. Bleecker & Houston), New York, NY
To schmooze Bobby Flay into signing with them, Diana and Charles dine together at one of his restaurants in the second season premiere. Though it's not specified where they dine, so I've gone ahead and included two of his Empire State eateries to the list... because why not? GATO is the more Mediterranean of the two restaurants listed. Situated in an 100-year-old building, GATO, according to its official website, "combines its NYC roots with a European sensibility" to create an environment that is equal parts casually laid-back, and excitedly bustling. Customer-recommended dishes include the Kale and Wild Mushroom Paella, Crab Risotto, and the mouth-watering selection of tapas. For more, visit gatonyc.com.

Bar Americain
152 W. 52nd Street, New York, NY
The second of Bobby Flay's restaurants, Bar Americain offers American classics -- naturally -- while maintaining a European brasserie-type environment. Specialities include Flay's spice rubbed steaks, made to order, and the signature "Plate of the Day" special, which, as the name suggests, changes with each day of the week. Other standard favorites include a secret recipe fried chicken, Gulf shrimp and grits, and wild mushroom and butternut squash crepes. Open for lunch and dinner daily, and brunch on the weekends. For more, visit www.baramericain.com/nyc.

Meatball Obsession
510 Avenue of the Americas at 14th Street, New York, NY
Okay, so this one's a bit of a cheat, as it's not actually referenced in the episode, but rather, seen in the background of Season 2, Ep. 4, when Jade Winslow is walking to her limo -- right before she's ambushed by Kelsey, Liza and Josh. At Meatball Obsession, known for its signature "Meatball in a Cup," founder Dan Mancini uses his "original, all-natural, old-world" family recipe to recreate his grandmother's famous beef, turkey and pork sausage meatballs -- which he serves with her special Sunday sauce, natch. The recipe's a secret, of course, but whatever they're made of, these meatballs can't be beat! If you're so inclined, gourmet toppings, including red peppers, onions and mushrooms, mozzarella cheese pearls, and mini ravioli, are also available at an additional charge. All meatballs served with dipping bread. Stop by and try one today! For more, visit www.meatballobsession.com.

Stanton Social
99 Stanton Street, New York, NY
This is the bar where Kelsey celebrates her 27th birthday in Season 2, Ep. 8. This chic and sexy lounge is a great place to stop for either drinks and tapas with a couple friends, or a full three-course meal with a larger group. Offerings include a full raw bar and the chef's twists on traditional favorites, such as French Onion Soup Dumplings, Lobster Roll Sliders, and Crab Cake Corn Dogs. Customers praise the fun atmosphere and intimate setting, saying "the dim lighting adds to the ambience." Best availability -- and liveliest environment -- on weekends. Price range: $31-60, according to Yelp. For more, visit thestantonsocial.com.

Times Square
Midtown Manhattan, New York, NY
The location of Empirical's book release event for its history-making franchise Crown of Kings, featured in last week's episode (Season 2, Ep. 11). Drawing over 50 million visitors annually, it's easy to see why Times Square is one of the world's most popular tourist attractions. But seriously, though... what can't you find in Times Square?! Eat at one of several restaurants throughout the neighborhood, including Carmine's (Italian), Capital Grill (Steakhouse/American) and Ellen's Stardust Diner (singing waitstaff -- always a treat!) It's also the heart of the Broadway Theater District, within walking distance from some of the greatest shows, including Tony winners Les Misérables, An American in Paris, Matilda the Musical and The Lion King. On the North End, you'll find the TKTS booth where you can buy tickets to these above shows -- and more. Snap a photo with Dora the Explorer, Mickey Mouse, SpongeBob, or SpiderMan, or enjoy a walk down the recently renovated pedestrian plaza. It's, of course, also the site of the New Year's Eve Ball Drop, seen 'round the world every year on Dick Clark's New Year's Rockin' Eve. So, what are you waiting for? Stop by this -- and all of the above -- fantastic New York location(s) today!

Grand Central Terminal
89 E. 42nd Street, New York, NY
Though this location has yet to be visited on the series, it's been included in several of the exterior shots that flash between scripted scenes. And why shouldn't it? It's a New York icon, and one of the most visited tourist attractions in the world, with over 750,000 visitors passing through daily. Grand Central Terminal is, of course, the hub for all out-of-town commuters, offering train service to Westchester, Putnam and Dutchess counties in New York, as well as Fairfield and New Haven counties in Connecticut. Within the terminal, The complete dining concourse on the lower level includes the Oyster Bar, which opened with the terminal in 1913, and is therefore, the oldest business within Grand Central. Be sure to check out the famous Sky ceiling -- steeped in history, period, and the centerpiece of the holiday light shows -- the annual holiday train show and other events at Vanderbilt Hall, and the renowned Whispering Gallery, an "acoustical marvel" between the Main Concourse and Vanderbilt Hall, which throws sound across a 2,0000 square-foot chamber, so that if you whisper into the wall on one end, you can hear another person's whisper on the other side -- approx. 40 feet away! It's so much more than just train tracks! Find out exactly what today! For more information, visit www.grandcentralterminal.com.