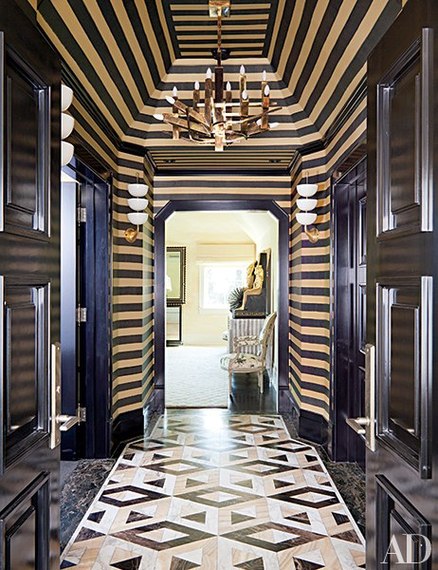 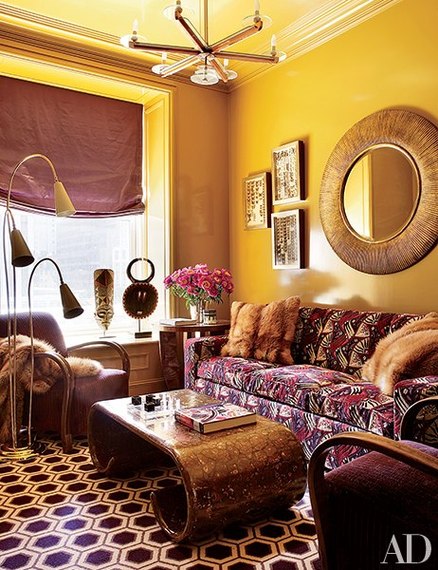 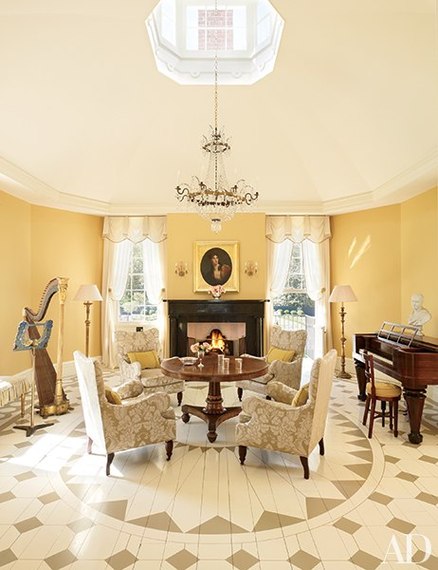 In the music room of the restored 18th-century Virginia residence Rose Hill, the floors were painted by Kristen Bunting according to a design by interior designer Amelia T. Handegan.

A geometric motif adds a graphic punch to the Federal-style Houston mansion of Susanne and Bill Pritchard, designed by Cullman & Kravis. 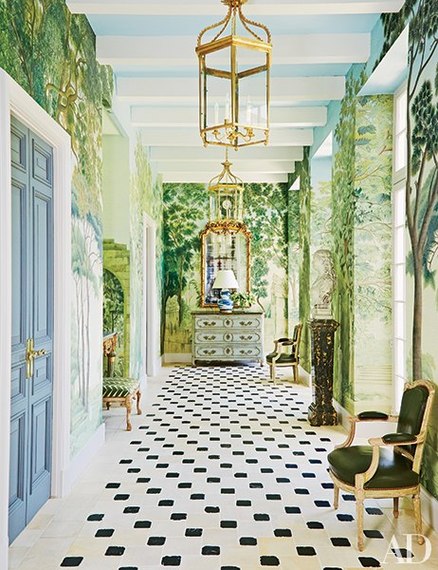 See more: Inside the Living Rooms of 10 Top Designers 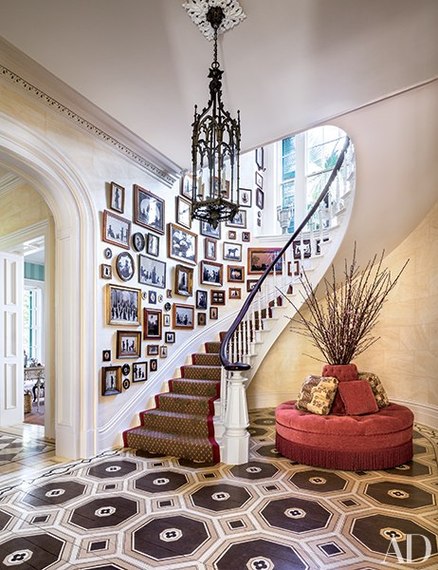 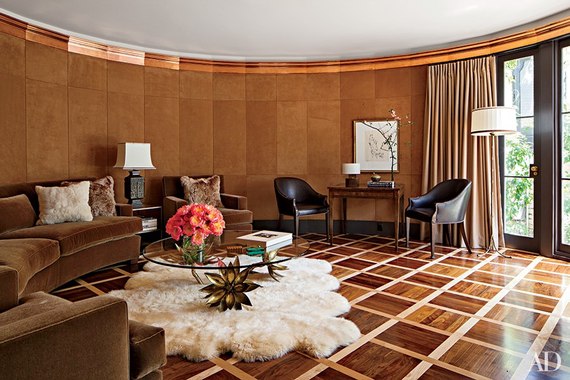 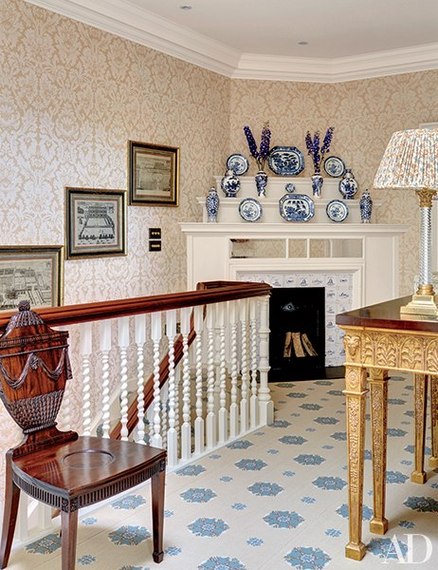 On the landing of a 300-year-old English country house, patterned carpet by Simon Playle riffs on the blue-and-white color palette of Delft tiles and willow-pattern china by the fireplace. 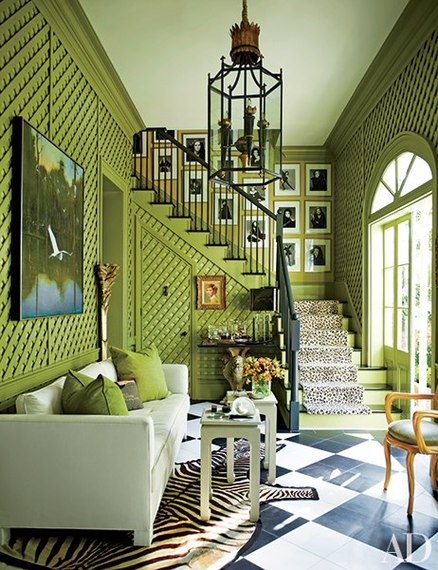 At Peter Rogers's New Orleans home, oversize black-and-white tiles add a crisp, clean element to the apple-green surround, derived from one of his favorite fabrics. 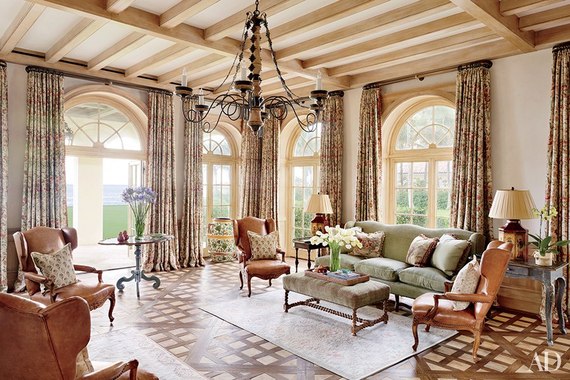 Create That "Yes, Peonies! How Better to Celebrate" Feeling
Cupcakes and Cashmere
Greet guests with a "I'm so glad you're here I got a massive bouquet of your favorite flower" bouquet displayed right on the coffee table.

Placing a small, affordable vase of flowers on the coffee table that nobody seems to notice (leaving you to wonder whether your money was wasted).

Move the bunch to the bathroom, like Cupcakes and Cashmere's Emily Schuman did. It's a room just about every guest visits during their stay, and the space is small and sparse enough that even a single bud vase is unmissable.
Cut Down The "Where Do You Keep the…?" Guesswork
2014 by Janae Hardy
Have a Matt Bomer lookalike serve drinks at your next cocktail party, charming everyone while keeping their glasses full.

Dumping the contents of your liquor cabinet on the kitchen counter so guests can serve themselves without conducting a scavenger hunt.

Keeping a bar cart in the living room. You can store all of your drinks and mixers right where the action is, and vintage, brass-colored carts are almost (almost!) as easy on the eyes as Bomer. If you have wood or laminate floors, roll the cart over a welcome mat so it won't move around -- many of the older models don't have brakes, say Elsie Larson and Emma Chapman, authors of A Beautiful Mess Happy Handmade Home.
Spritz A New Signature Scent
ZStockPhoto/iStock/Thinkstock
Throw open the windows and let the refreshing smell of the rows of lemon-verbena trees waft in, because -- surprise! -- you actually live in a Tuscan villa.

Getting that crisp, clean scent from a few strategically placed candles.

Swapping out your go-to home fragrance. Clean scents have been very popular over the years -- think the cucumber melon-infused '80s, which gave way to the spring rain and linen scents of the '90s -- but the latest take tends to borrow inspiration from fine perfumes. People are starting to gravitate toward scents that include hints of amber, musk and wood, says Geoff Medeiros, vice president of brand and product development at Yankee Candle. These notes are so subtle they're usually just mentioned in the candle's description, not its name -- for instance, he suggests Yankee Candle's Soft Blanket, and we also love Bath & Body Works' Autumn Sky or Bella J's Surf Shack.
Make A Delightful First Impression
2014 by Janae Hardy
Repaint the outside of your house -- if only you could find colors that you'll still like a year from now and a spare weekend to do it all in.

Hanging a for-all-seasons boxwood wreath on the door and calling it a day.

Decorating your own doormat. You can test out the colors you're considering for your house and create a cheerful entrance in less than an hour. Be sure to use porch paint or latex paint, since it tends to be the most durable, says Chapman. For extra protection, coat it with a waterproofing spray. (You can also do this to create your own kitchen rugs, like the one pictured here.)
Allow For More Casual (Yet Comfortable) Seating
AKA Design, Shannon Acheson
Find chairs that are as cushy as a Lay-Z-Boy and as stylish as an Eames -- and enough of them for every person you invite over (yet somehow never crowding the room).

Carting every chair you own into the living room and praying you're the only one who sits on the creaky one.

Making a few no-sew floor pillows that people can sit on. It's inevitable that people will plop down on the floor at parties, and these ensure that they're comfortable. Plus, you can store them in wicker baskets under a console table or in the closet, so they don't take up as much space as traditional chairs. AKA Design has a full tutorial for making your own.
Upgrade Your Coat Check
Heidi/ White Loft Studio
Keep your coat closet gloriously sparse, so it's always ready to hold people's jackets, scarves and hats.

Clearing off your bed and letting people toss everything there.

Building your own DIY coat rack out of a few steel pipes and connectors, says Abby Larson, founder of Style Me Pretty Living. All of the materials can be found at a hardware store, and it's as easy as screwing the pieces in place (and coating it with gold spray-paint, for an of-the-moment touch). If you're not the DIY type, several companies also sell collapsible racks that you can tuck under the bed when they're not in use.