Over the last several weeks, leading up to the tenth anniversary of 9/11, there has been a lot of talk about Graydon Carter's declaration on September 18th, 2001 that the attacks marked "the end of the age of irony." Comedy has certainly evolved over the last ten years, but no one can say that the decade that brought us the rise of Stephen Colbert and The Onion (among others) has lacked that essential ironic spirit.

Below, we look back at ten years of comedy that could only exist in a post-9/11 world. This isn't about those sincere first moments back on the air from Jon Stewart, David Letterman and others. These are the moments when comedians attempted to mine any humor they could from the attacks and their aftermath and make people laugh in unexpected and cathartic ways.

If there are other videos from the past ten years that resonated for you, please post them in the comments below. More comedy videos at: GotchaMediaBlog.com 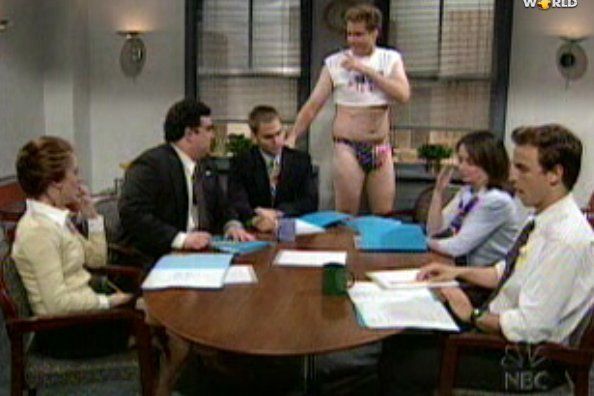 1 / 10
SNL - Will Ferrell's Patriotic American Flag Thong
This sketch from the second episode of <em>SNL</em>'s 2001 season is the moment that <a href="http://nymag.com/news/9-11/10th-anniversary/snl/" target="_hplink">Amy Poehler remembers</a> the show finding a way to laugh again. [<a href="http://gtcha.me/pqkKMk" target="_hplink">WATCH VIDEO</a>]