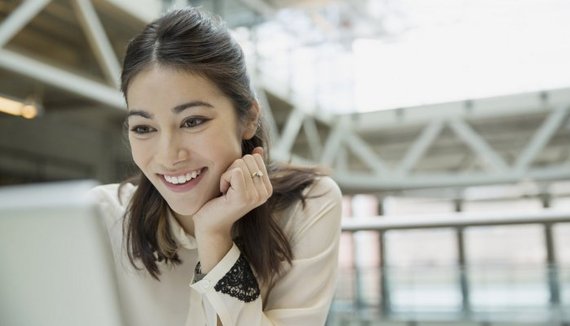 Happiness comes in so many different forms that it can be hard to grasp. Unhappiness, on the other hand, is easy to identify; you know it when you see it, and you definitely know when it's taken ahold of you.

And let's face it, happiness and work do not always go hand in hand. A 2013 Gallup study, which reported data from more than 180 million people, found that just 13% of us consider ourselves to be "happily engaged at work."

Those who do rate themselves as happy are 36% more motivated, six times more energized, and twice as productive as their unhappy counterparts.

Happiness actually has less to do with your circumstances than you might think. A University of Illinois study found that people who earn the most (more than $10 million annually) are only a smidge happier than the average Joes and Janes who work for them, and psychologists from the University of California found that genetics and life circumstances only account for about 50% of a person's happiness. The rest is up to you.

Life circumstances have little to do with happiness because much happiness is under your control -- the product of your habits and your outlook on life. Happiness is synthetic -- you either create it, or you don't.

A critical skill set that happy people tend to have in common is emotional intelligence (EQ). At TalentSmart, we've tested the EQs of more than a million people and know what makes high EQ people tick. So, we went digging until we found some great ways that emotionally intelligent people create their own happiness.

1. They don't obsess over things they can't control. It's good to know how the Brexit might affect your country's markets or that your company could merge with its largest competitor, but there's a big difference between understanding these larger forces and worrying about them. Happy people are ready and informed, but they don't allow themselves to fret over things that are beyond their control.

2. They choose their battles wisely. Emotionally intelligent people know how important it is to live to fight another day. In conflict, unchecked emotion makes you dig your heels in and fight the kind of battle that can leave you severely damaged and unhappy for some time to come. When you read and respond to your emotions, you're able to choose your battles wisely and only stand your ground when the time is right.

3. They get enough sleep. I've beaten this one to death over the years and can't say enough about the importance of sleep to improving your mood, focus, and self-control. When you sleep, your brain literally recharges, removing toxic proteins that accumulate during the day as byproducts of normal neuronal activity. This ensures that you wake up alert and clear-headed. Your energy, attention, and memory are all reduced when you don't get enough quality sleep. Sleep deprivation also raises stress hormone levels on its own, even without a stressor present. Happy people make sleep a priority, because it makes them feel great and they know how lousy they feel when they're sleep deprived.

4. They heed their moral compass. Crossing moral boundaries in the name of success is a sure-fire path to unhappiness. Violating your personal standards creates feelings of regret, dissatisfaction, and demotivation. Know when to stand your ground and express dissent when someone wants you to do something that you know you shouldn't. When you're feeling confused, take some time to review your values and write them down. This will help you to locate your moral compass.

5. They exercise during the week. Getting your body moving for as little as 10 minutes releases GABA, a soothing neurotransmitter that also limits impulsivity. A University of Bristol study showed that people who exercised on workdays reported improvements in time management, mood, and performance. The benefits of exercise always outweigh the time lost in its pursuit.

6. They have a growth mindset. People's core attitudes fall into one of two categories: a fixed mindset or a growth mindset. With a fixed mindset, you believe you are who you are and you cannot change. This creates problems when you're challenged, because anything that appears to be more than you can handle is bound to make you feel hopeless and overwhelmed. People with a growth mindset believe that they can improve with effort. This makes them happier because they are better at handling difficulties. They also outperform those with a fixed mindset because they embrace challenges, treating them as opportunities to learn something new.

7. They clear the clutter. I don't need to remind you of how much time you spend at work. Take a good look at your workspace. You should create a space that's soothing and uplifting. Whether it's a picture of your family, a plant, or an award that you're proud of, display them prominently to keep them on your mind. Get rid of the junk and clutter that hold no significance and do nothing positive for your mental state.

8. They lend a hand. Taking the time to help your colleagues not only makes them happy, but it also makes you happy. Helping other people gives you a surge of oxytocin, serotonin, and dopamine, all of which create good feelings. In a Harvard study, employees who helped others were 10 times more likely to be focused at work and 40% more likely to get a promotion. The same study showed that people who consistently provided social support were the most likely to be happy during times of high stress. As long as you make certain that you aren't overcommitting yourself, helping others is sure to have a positive influence on your happiness.

9. They let their strengths flow. A University of Chicago study of peak performance found that people who were able to reach an intense state of focus, called flow, reaped massive benefits. Flow is the state of mind in which you find yourself completely engrossed in a project or task, and you lose awareness of the passage of time and other external distractions. Flow is often described as an exhilarating state in which you feel euphoria and mastery simultaneously. The result is not just happiness and productivity but also the development of new skills through a heightened state of learning. The key to reaching flow lies in organizing your tasks such that you have immediate and clear goals to pursue that play to your strengths. As you begin working on these tasks, your focus increases along with your feelings of adequacy. In time, you reach a flow state, in which productivity and happiness flourish. Set clear goals each day and experiment with task order until you find the secret formula that gets you flowing.

10. They believe the best is yet to come. Don't just tell yourself that the best is yet to come -- believe it. Having a positive, optimistic outlook on the future doesn't just make you happier; it also improves your performance by increasing your sense of self-efficacy. The mind has a tendency to magnify past pleasure to such a great degree that the present pales in comparison. This phenomenon can make you lose faith in the power of the future to outdo what you've already experienced. Don't be fooled. Believe in the great things the future has in store.

Applying these strategies won't just improve your happiness at work; most of them will also improve your emotional intelligence. Pick those that resonate with you and have fun with them.

What makes you happy? Please share your thoughts in the comments section below, as I learn just as much from you as you do from me.