In talking with audiences about my new book, "God's Jury: The Inquisition and the Making of the Modern World," I've found that the same questions come up over and over. Here are the Top 10.

1. I know what the word "Inquisition" means, even use the word myself sometimes, but my history is shaky. What does it refer to?

It was a means used by the Church to enforce orthodoxy. Inquisitors would go out into troublesome regions, question people intensively, conduct tribunals and mete out punishments, sometimes harsh ones, like burning at the stake. Depending on the time and place, the targets were heretics, Jews, Muslims, Protestants, rationalists and sometimes people who held superstitious beliefs. The Inquisition everyone has heard of is the Spanish Inquisition, but there was more than one Inquisition, and the earliest, at the start of the 13th century, wasn't in Spain. And although Jews were sometimes the focus of that first Inquisition, as they primarily were in Spain, the more urgent targets were Christian heretics in the south of France and northern Italy.

2. How many people were burned at the stake?

No one really knows. The inquisitors were excellent record-keepers -- at times truly superb. One surviving document gives the expenses for an execution down to the price of the rope used to tie the victims' hands. But a lot of the records have been lost. An estimate that has wide credibility among historians is that about 2 percent of those who came before Inquisition tribunals were burned at the stake, which would mean several tens of thousands of people. The rest suffered lesser punishments.

3. Over what period of time are we talking about?

Roughly 700 years. The official start is usually given as 1231 A.D., when the pope appoints the first "inquisitors of heretical depravity." The Spanish Inquisition, which begins under Ferdinand and Isabella, doesn't end until the 19th century -- the last execution was in 1826. At the outset, the main focus was on Jews and "judaizers" -- Christian converts of Jewish ancestry who were accused of secretly adhering to Judaism. The Roman Inquisition, created to fight the Reformation, and run from the Vatican, doesn't come to an end until the 20th century.

4. Does it survive in any form? I sometimes hear about theologians today getting into trouble.

The Vatican's Congregation of the Inquisition was formally abolished in 1908 -- but it may be more correct to say it was renamed. It was turned into the Holy Office, which in the 1960s became the Congregation for the Doctrine of the Faith. This is the department that Cardinal Josef Ratzinger ran before he became Pope Benedict XVI. It occupies the palazzo built for the Inquisition in the middle of the 16th century. And it's still the department that keeps an eye on what theologians write, sometimes calling them on the carpet.

5. Does the Inquisition explain why Spain in some ways took longer to modernize than France or England? Historians do ask this question, but you'll get different opinions. The "yes" answer will point to the wholesale expulsion from Spain in 1492 of many thousands of Jews -- people who were often highly educated professionals. And it will point to the attempted suppression, over centuries, of intellectual inquiry of all kinds. The same kind of suppression occurred in Italy. The problem is figuring out how effective the suppression really was, not to mention disentangling the influence of the Inquisition from other factors. Bottom line, though: No one argues that the Inquisition was a force for enlightenment.

6. Did Torquemada himself have Jewish ancestry? Historians have looked into this pretty carefully. The consensus seems to be that Tomas de Torquemada, who directed the Spanish Inquisition in its earliest (and bloodiest) years, did not have Jewish ancestry, but other members of his extended family probably did. This wouldn't have been unusual in Spain. Over the centuries there was considerable mixing among Christians, Muslims and Jews, especially in the higher ranks.

7. When I think "Inquisition," I think "torture" -- is that real or is it a myth? Torture was an integral part of the inquisitorial process, mainly to extract confessions -- just as it was part of the systems used by secular courts of the time. Modern historians explain that the Church tried to regulate torture, establishing clear guidelines for its use. Unfortunately, limitations on torture never really work -- that's one lesson from the Inquisition, and from the recent American experience. It's never hard to justify applying a little more physical coercion once you've decided that physical coercion is fine to begin with. Medieval inquisitors, limited to one session of torture per person, sometimes conducted a second or third or fourth, arguing that it was just a "continuance" of the first. 8. Is waterboarding torture? Vice President Dick Cheney called waterboarding "a dunk in the water." The Justice Department attempted to define torture so narrowly that nothing came up to the torture threshold unless it risked causing irreversible impairment, organ failure or death. The inquisitors believed that waterboarding was torture. That's why they used it.

9. How does the Index of Forbidden Books fit into the picture?

It was created by the Roman Inquisition to deal with the onslaught of books -- many of them advancing ideas the Church didn't like -- made possible by the printing press, and over the centuries the Index grew and grew. It existed for a very long time -- it wasn't abolished until 1966. The impulse to criticize still has some life. A decade ago Josef Ratzinger expressed concern over the "subtle seductions" of Harry Potter.

10. The "Making of the Modern World" part of your title -- what's the argument? The Inquisition was based on intolerance and moral certainty. It tried to enforce a particular view, often with violent means. There's nothing new about hatred and persecution; human beings have been very good at this for millennia. What's new about the Inquisition is that persecution is institutionalized. It persists for generation after generation. That requires organizational tools that were being newly developed in the Middle Ages. How do you create and manage a bureaucracy? How do you collect information and organize it in a way so that you can find what you need? How do you discover what people are doing and thinking? We take the ability to do all these things for granted. When you look at the Inquisition, you see these capabilities coming into existence. You see the world becoming modern.

PHOTO GALLERY
10 Things You Should Know About the Inquisition
Download
Calling all HuffPost superfans!
Sign up for membership to become a founding member and help shape HuffPost's next chapter
Join HuffPost 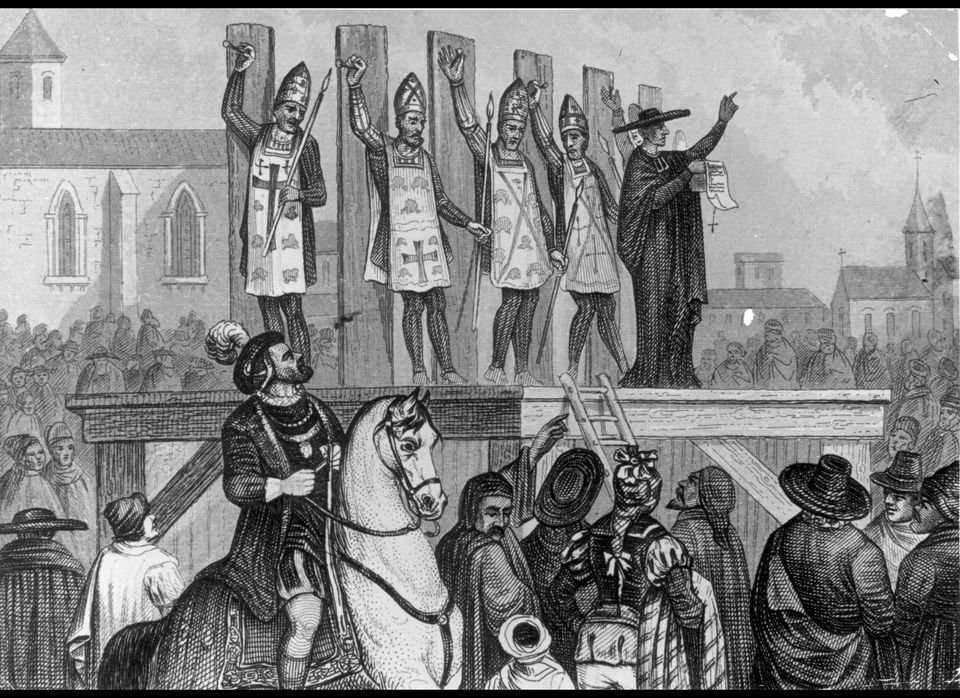