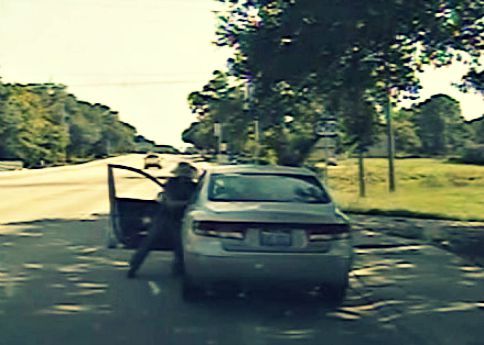 Dear Texas Department of Public Safety, thank you for releasing the dash cam footage of the confrontation between Texas State Trooper Brian T. Encinia and the motorist Sandra Bland.

4. At the 10:17 mark in the video, Officer Encinia radios "10:98," and requests a second car. Well, a 10:98 is a jail break, or an escaping prisoner. A 10:78, that is, "assistance needed" would have been more appropriate, since Sandra Bland was still INSIDE the car and had not escaped, correct?

5. When a detainee notifies the arresting officer of a preexisting medical condition, such as epilepsy, and/or an injury sustained during the arrest, are paramedics called to the scene?

6. Looking back on everything that has transpired since the arrest of Sandra Bland, I have one question for the female police officer that arrived on the scene: How you doin'? Do you feel you fully exercised your unique position as a female police officer to use your voice and presence to calm this irate twenty-something woman down? Something like, "Look, Ms. Bland, you're not in Chicago, you're in Texas. Woman-to-woman, you must tone it down if you want to be heard," may have deescalated the situation. From what I heard on the tape, you were escalating the situation.

7. Why are two police officers searching the vehicle so thoroughly for a minor traffic stop? One officer even pats the rooftop--looking for a secret stash of drugs, maybe? Would Sandra Bland's Illinois license plates have anything to do with this?

9. Did Sandra Bland have a right to know why she was being arrested? She clearly asked, several times.

10. Did anyone recite Sandra Bland's Miranda rights? Did she know that she had a right to remain silent? Or did someone force the silence upon her after the fact?

Dear Texas Department of Public Safety, thank you for taking the time to read this, and I eagerly await your response.