By William Frierson, for Where® 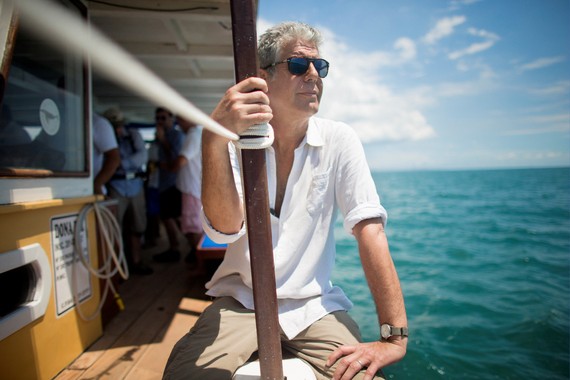 He's an international man of mystery, knows well how to wield a sharp blade and can order a meal in a myriad of foreign tongues. No, we're not talking James Bond. It's all about Anthony Bourdain. The chef, NYT-best-selling author, television host, culinary connoisseur and all-around bad ass spoke to us, giving us his take on today's foodie trends, the upcoming season of CNN's Parts Unknown (which premieres on April 13th), his antipathy for Brooklyn hipsters and insider info on his in-the-works Lower Manhattan food market. And he's doing so with all his signature sass and spunk. This one's juicy -- grab a few extra napkins before sinking your teeth in. Or don't, and just let all the drippings dribble down your chin.

You make a living doing what everyone dreams of -- traveling the world and experiencing exotic cultures and cuisines. How does it feel to live the dream? Ever pinch yourself (and if so, where on your body and how hard)?
Oh, totally. [Laughs] I constantly find myself looking in the mirror as I shave, in some faraway place, thinking "Wow. This is pretty awesome." Or, sitting on a dune in an empty corner of Saudi Arabia at the end of a day's shoot thinking, "Who saw this coming?" I'm very, very aware of how lucky I am and have cause to remind myself frequently.

Few find themselves in transit as often as you. What's it like to constantly be on the go? Any tips for enduring layover purgatory?
Well, look, I plan for airports. I wear shoes that slip on and off. I never wear a belt. I don't have liquid, gels or a lot of metal on me, so I'm prepared for that security line. I'm not going to be fumbling around acting surprised, holding up the people behind me. I try to carry a scrunchy, light down jacket with me in carry-on, just in case I have to use it as a pillow on a floor someplace. I load up my iPad with e-books, movies and videos in case my flight is delayed and I have to spend a lot of time there. I try to be as prepared as I can for things to go wrong -- and they do.

If NYC was a culinary dish, what would it be? How would it taste? Feel free to riff on ingredients, preparation, smells and flavors.
Which New York are we talking about? To me, there are certain iconic dishes. What represents the length and breadth of New York? That's a challenge. For me, it's the smell of a "dirty water" hot dog or a pastrami sandwich. Those are uniquely New York things. Pastrami with the whole Eastern European/Jewish diaspora example behind it is one example. But New York is really a gumbo ... but without being a gumbo at all.

You've gone from down-and-dirty, Kitchenese-speaking line cook to CNN frontman. Has it changed you? Are you still "the chef [you] always hated as a cook"?
Look, you know, I'm the same guy. I'm just paying my rent on time and I have health insurance.

After your success with "Kitchen Confidential," you've described the industry perception of you as a "poster boy for bad behavior"? How bad are you, Tony? What about bad behavior outside the kitchen?
That was the perception immediately when "Kitchen Confidential" came out. I think it was easy to overlook that I was writing about a period of time that was already in the past. I mean, I was 44 years old when I wrote the book. I was no longer doing heroin or cocaine or running around with waitresses or servers. At that point, I wasn't that bad. I certainly wasn't a boy. People think of me as a party boy, but it's been a long, long time. If you're a super fan and you come up to me looking to do tequila shots, chances are I'll politely decline. I wouldn't still be here if I was doing shots with every fan who came up to me with a tray-full!

In the finale episode of "No Reservations," Brooklyn-edition, you expressed a pretty clear disdain for the gentrification of Brooklyn. Williamsburg was conspicuously omitted from your coverage. You've never been one to sugar-coat your opinions. How would you respond to those who say all the hipster hate is isolating to your fan base?
Look, if you can't make fun of hipsters, comedy is dead. That said, I think I've been pretty explicit in the show repeatedly that however much fun they may be to make fun of -- and the group is a fat, easy, low-hanging target -- it is a hipster-driven economy right now. It's probably the salvation of the restaurant business. And what is a hipster anyway, REALLY? When anyone like myself makes fun of hipsters we're really generally referring actually to anyone younger than us! [Laughs] I think you should take my supposed hipster hate with a huge grain of salt. It is neither genuine nor completely irrelevant.

What about the barrage of locavore, farm-to-table, barnyard-chic, New American spots taking over Brooklyn?
Look, if you still have sense of humor about yourself ... I'm OK with it. I don't want to get lectured while I'm fed, but at the same time, in fits and starts, we're arriving at some form of enlightenment. At least people care about where their food comes from and we're thinking about the issues and it's surely nice to try and eat locally and better for our communities and local economies. I don't want to be messianic about it. I don't want to make people feel bad about their food choices. There is a point of diminishing returns. I went to the supermarket the other day with my 6-year-old daughter and I start heading to the un-organic food section and all the moms are looking at me like I'm a [expletive] war criminal. You know, maybe that's not so good. But generally, I buy my food from a farm and I serve it on a [expletive] table -- do I really need a T-shirt announcing that? I think it's part of a positive movement with occasional silly manifestations. 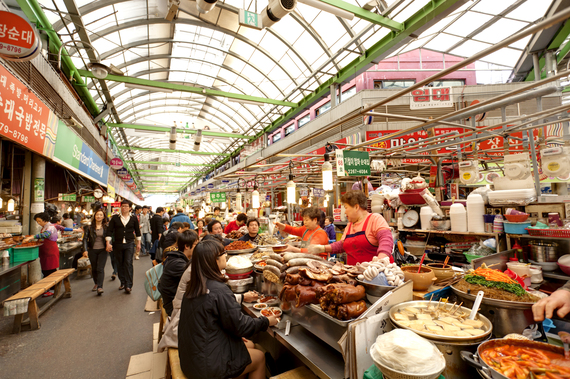 Bourdain is bringing an international-style food market to Lower Manhattan that will echo the styles of some of Asia's markets.

Everyone is anticipating your new, international food market in Lower Manhattan. Care to dish on what's coming -- venue, concept, offerings?
It's about what turns me on. I'm a huge fan of Singapore and Hakka centers and the Asian-Hong Kong and Dai pai dong and the way that Singapore has been able to keep the integrity of their street food in a modern, germophobic world. I think it'd be very cool to have that in New York and I hope to riff on that model. I hope to have some great Singaporean and Southeast Asian and South American vendors and craftsmen bring in the kind of delicious food that many other people around the world see as a birthright and for one reason or another we really haven't had. It's a business model and style of eating that I think would be good for New York and even if I wasn't involved with creating this space, it's a place that I'd like to be a customer.

What do you have in store for us in the upcoming season of "Parts Unknown"?
Every week me and my crew sit around and look at the map of the world and talk about movies we've seen and books we've read, and ask ourselves where we would like to go and what's the most [expletive]-up thing we could do when we get there! How are we going to make the most creative hour of television we possibly can without repeating ourselves? I mean, that's always an issue.

Let's end with a drink. You're sitting down in your fantasy bar. What's in your glass?
I'm in Belfast and it's 4 o'clock in the afternoon -- late-afternoon sun shining through the window, dust motes floating lazily in the air, maybe The Pogues are on the jukebox -- and I'm drinking Guinness from a pint glass. Slowly.