Publishing is changing. Just as the iPod and iPad changed music and movies and YouTube, Hulu and Netflix are changing TV, the book and publishing are being changed by the eReader and eReader app. We now live in a world where the indie.book can rise up to challenge the bestseller list. Likewise, some authors are making a killing writing and publishing on their own. Others, like Hugh Howey, are changing the game -- becoming hybrid authors walking the line between indie and mainstream publishing.

Hugh and I have much in common: born in 1976, both from the South (me from Virginia, him from North Carolina), he lives in Florida and I spent several years in florida. He dropped out of college and it took me three attempts at an undergrad education. Also, we are both writers.

Alas, that is where our similarities part ways. Hugh has become a hugely successful author, publishing his Wool novels to great acclaim. He even has Hollywood knocking at this door.

I, on the other hand, am the author of a beautiful (my mother says so) novel called The Boston 395. I am not hugely successful and if Hollywood is knocking they have the wrong address. In part, the reason I am writing these articles is for writers like myself -- a place to listen to our wise elders. It's sort of a DIY MFA in being DIY. 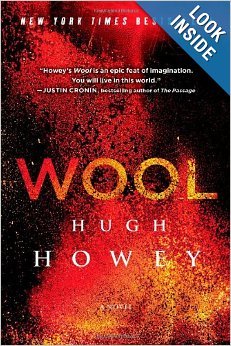 Hugh, can you tell us a little of your bio?

I'm a college dropout who spent most of his adult life working on privately owned yachts and suppressed a childhood dream of being a writer until I was landlocked and without work. I wrote because it was on my bucket list to get a novel out there. I became as addicted to writing as I ever have been to reading. With a lot of dumb luck and great timing, I'm now a full-time author. I live in Florida with my wife and our dog. When I'm not writing, I enjoy long walks on the beach and sunsets. Is it okay that I just copied all this from my old Match.com profile?

Wool, from my understanding, began on a small press before you self-published and now has distribution from one of the majors. Can you tell us about that journey?

Actually, Wool was self-published from the beginning. It was my eighth or ninth published work, I can't remember which. My very first novel was published with NorLights Press, which was a wonderful and humbling experience, but I also saw that the tools to publish were available to anyone. This was back in 2009, before self-publishing had the same reputation it has today. All I saw was that I had to give up ownership of my art for a one-time service of editing and formatting. I figured I could outsource those things. So I filed away the contract for my second novel and began self-publishing. (It was an agonizing decision -- I hope I don't make it sound too cavalier. Much weeping was involved).

Hugh, you and I are of the same generation which means we have some shared pop-culture inspirations -- namely the "indie boom" in movies and music of the '90s. For myself, this helped inspire my move to be an "indie writer" -- all my heroes just "did it themselves?" How much did this influenced your desire to publish independently?

Very much. I wanted to self-publish from the very start, but early readers convinced me that I should aim higher. My gut feeling was that owning a home was better than renting and being a small business owner was better than punching a time card every day. I like the idea of being self-made. I also enjoy learning all aspects of book creation (cover art, formatting, pagination). Self-publishing is just a better fit for me. And yeah, part of that is my fondness for artists who have control over their material. I listened to a lot of local and indie bands growing up. And I tend to watch more documentaries and low-budget films than anything else these days.

Another influence, come to think of it, is the open-source and crowdsourced community. I like the idea of the little people making great things through collaboration. My books are like that. They also allow me to contribute to the freelancers who help me produce the best product possible.

For many the appeal of the "indie thing" is the DIY nature of it all and of making a go of it outside the system. You, my friend, seem to have discovered the next level -- creating a hybrid of indie electronic self-publishing plus international distribution plus distribution from a major publisher. Tell us about that journey and what it means for the future of indie writers and publishing in general?

It's been a wild ride. I've always wanted to work with major publishers in order to reach a wider audience, but I wasn't willing to give up ownership of my work in order to get that. We walked away from quite a few six and seven-figure deals before Simon & Schuster came to us with a deal that allowed me to retain my digital rights while selling them my print rights. It's been the best of both worlds, and I hope it's a model we'll see more of in the future, especially from those who are having great success with their e-books.

How is Wool: The Movie coming along? I briefly worked in the film industry and know that it can be a world of near misses and development hell. Has any of that impacted the film? The book is your baby -- are you able to step-back and see the film as being its own, separate phenomena or are they all tied up together?

My assumption is that there will never be a film. Even as development has marched forward, I expect it to stumble and fall. We have a studio onboard and a screenplay written. The next step is to cast the work. And then wait and see if there's a slot for release and any will to shoot. There are so many places where this can break down, that I just tell myself to be thrilled that it got this far.

As for my role in shaping the film, my attitude is that they can't change the book. It will always be the story I wrote. Film is a different medium, and that means taking liberties. I like all of the ideas I've heard thus far, and I have immense respect for and trust in the team that has assembled around this.

What is your writing process like and how much time do you spend on
promotion?

I write best in the mornings. I get up, read the paper over a bowl of cereal, and then I write until lunch time. I eat a sandwich, walk the dog, and then spend the afternoon catching up on emails and social media stuff. I don't really like to consider the stuff I do promotion, not so much because I think that word has negative connotations, but because I don't spend my time asking people to read my works. That's for other readers to do or not do. I spend my time writing and engaging with my existing readers, which I do because it's fun for me.

One of the great joys of my life was to study writing at Eastern Washington University. To have the space to say "I want to be a writer" and to have people take that seriously is a pretty awesome thing. What does your writerly education look like? Are you self-taught/self-teaching?

I'm self-taught. Most of what I learned came from years of reading a metric ton of books. But I also study TV, film and comics for storytelling knowledge. I'm an active rather than a passive learner. While being entertained, I ask myself why some things are working and not others. I've also spent a lot of time practicing.

I've been amazed over the years to follow various writers of various genres. It's always cool to see a writer of horror talk about being inspired by the Bronte sisters. What are your influences?

They are too varied to list. I read a lot of non-fiction, so people like Steven Pinker and Judith Rich Harris have influenced me. I'm a huge fan of Shakespeare, especially his sonnets. I used to memorize them, and I still enjoy reading them before writing sessions. I like Swift and Dumas. I grew up on Heinlein and Asimov. I've been through phases of mystery novels and thrillers and cozies and horror. You name it.

How has the "free economy" influenced your business practice? In the past we would see bands give free downloads of a song or two, but you have a whole collections worth of short stories for free on your website. Is that just good business or are you just so prolific you have to give some away to prevent them from clogging up your computer?

Well, the short stories are works I put up back when nobody would pay for my work. I haven't had the time or inclination to take those down or collect them into an anthology and put them up for sale. They've just always been there. But I do employ free in that I give away the first Wool story. It's self-contained, and I've done very well with the work, so I'm happy to let readers sample it and see if they care to explore any further. Obscurity is a far worse crime than being cheap.

I see you are or were from North Carolina. I'm from Virginia and my folks retired to Wilkes County, NC. Despite having lived on the West coast since my mid-20s I am finding, more and more, the rhythms of the South in my fiction. How has geography impacted your work work?

It's hard to say. I haven't lived in one place for very much of my adult life. I spent a few years in Charleston, SC. And then a year in the Bahamas. And then Florida, New York City, Charleston, Florida, the Caribbean, Chicago, Miami, Virginia, NC, and now back to Florida. I've spent quite a bit of time on the West coast and in Colorado. My hope is that all of these places have made their way into my writing and into my voice. Because I hope they're all a part of who I am today.

Hugh Howey is the author of the award-winning Molly Fyde Saga and the New York Times and USA Today bestselling Wool series. He lives in Florida.

Jason Derr is the author of The Boston 395 and the young adult short story "Her Red Wings." His fiction has appeared in Relief, The Midnight Diner, Literary Orphans and Green Briar Review.