Donald Trump is the biggest bullshit artist our nation has produced in the past few decades. But his con game is full of holes. Anyone with a little common sense can see right through his would-be tyrant shtick, which relies on scapegoating undocumented immigrants and Muslims while pretending to be a successful, competent businessman with "one of the great temperaments" who can solve all of America's problems. 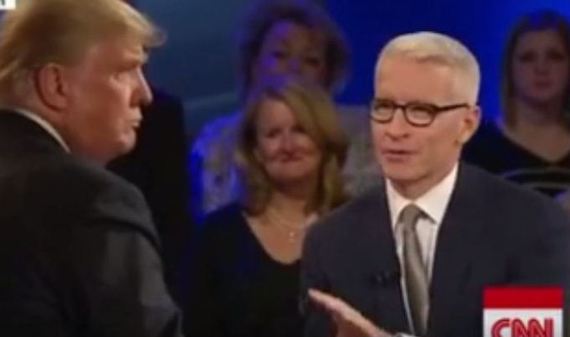 In order for Trump to maintain the illusion that he's not a fraud, he has to lie relentlessly about things big and small, and dodge as many serious questions as he can. That strategy posed risks for him on Sunday, October 9, when Trump met Hillary Clinton in the town hall-style second Presidential debate, and general election voters got a chance to weigh in on some of their concerns.

But more often than not, what was asked in St. Louis didn't wholly reflect the fact that most voters have a lot of questions Donald Trump doesn't want to answer. 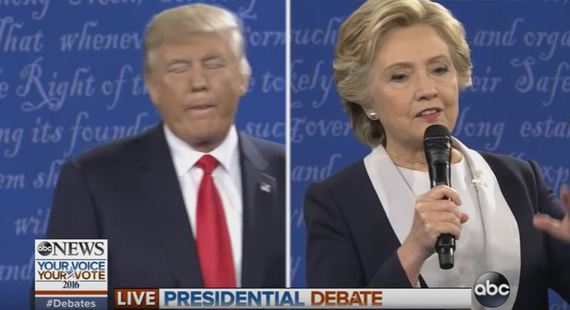 The second debate marked the first time citizens were able to submit and vote on questions online, with the top 30 supposed to be considered for inclusion by the debate's ABC and CNN moderators. More than three and a half million votes were cast for over 15,000 questions submitted at PresidentialOpenQuestions.com, a project of the bipartisan Open Debate Coalition.

Unfortunately, the top 30 voter-submitted questions were ignored by Martha Raddatz and Anderson Cooper, who instead cherrypicked a single question from the site, one regarding the latest Wikileaks dump of e-mails from Clinton campaign chairman John Podesta. Left unspoken was any context that the leaked e-mails were almost certainly stolen by Russian intelligence agency hackers, in an effort to damage Hillary's campaign and boost Trump's chances.

The top question submitted ("Would you support requiring criminal background checks for all gun sales?") was endorsed by over 75,000 citizens, and the 30th most popular question favored by over 20,000, yet the only question chosen to be asked received a mere 13 votes.

This failed Open Debate Coalition experiment now serves as a glaring example of how the American public doesn't have enough opportunities to legitimately question the presidential candidates when it counts, in widely-viewed national forums during the general election season.

Here are ten Open Debate questions that all received more votes than the one selected by the moderators. They could have been fairly asked of both candidates, and yet would have exposed Donald Trump for the unqualified, racist, sexist, ignorant, sociopathically lying, shamelessly scapegoating, unfit to be President fraud that he is. Click on any question to view how it was originally submitted online.

1) Do you believe in gender equality - equal rights for both men and women? Why?

Trump's lewd and vile remarks about groping, kissing, and attempting to have sex with married women as heard on the 2005 tape released by the Washington Post on October 7 confirmed what we already knew about the man's despicable character.

This week, more shoes dropped as former Miss Teen USA contestants revealed that Trump, who at the time owned the pageant, had walked in on them while they were changing. Some of the girls in the room were as young as 15. And multiple women came forward to confirm Trump had forcibly groped and kissed them, the same conduct he was caught on tape bragging about in 2005. At last Sunday's debate, Trump emphatically denied he had ever actually engaged in such behavior.

Trump has shown time and time again how he views women as objects, not equals. The day before he unleashed his now-infamous early morning Twitter storm against former Miss Universe Alicia Machado, trying to convince the world she deserved to be weight-shamed because she was "disgusting," the Los Angeles Times published a lengthy investigative report about Trump's apparent sex discrimination in the workplace. Statements made by multiple employees of a Trump-owned California golf course show Trump wanted female employees fired who weren't young, pretty and thin enough.

Trump falsely claims our economy is in shambles, and it's all President Obama's fault. In reality, Obama has brought the economy out of the ditch that George W. Bush's policies drove it into, and presided over the longest stretch of private-sector job growth on record.

In an August speech before the Detroit Economic Club, Trump said the unemployment rate as reported monthly by the Labor Department was one of the "biggest hoaxes in politics." Although the reported unemployment rate has hovered around 5% for the past year, over the course of his campaign, Trump has claimed the real rate ranges from 18% to 49%.

Independent economists agree the outdated, discredited economic policies Trump would implement - huge tax cuts for the wealthy that would blow a $5.9 trillion hole in the national debt, restricting immigration, and a global trade war - could wreck the U.S. economy.

3) What is your plan to combat climate change & build a green economy?

Trump claimed in a 2012 tweet that "The concept of global warming was created by and for the Chinese in order to make U.S. manufacturing non-competitive." During his first debate with Clinton, she called him out over that fantasy. "I did not say that," lied Trump in response. But of course, he did. And he has labeled climate change a hoax numerous times.

4) Why is it important for every American to pay our fair share of taxes?

In the first debate, when Clinton pointed out Trump hadn't paid federal income taxes during some years, he replied, "That makes me smart." An hour later, he denied having said it, although 84 million viewers saw and heard him.

Studies have shown most Americans consider paying taxes to be a moral obligation and act of civic duty, and agree with Hillary supporter and actual billionaire Mark Cuban's view that "after military service, the most patriotic thing you can do as a wealthy person is pay your taxes."

5) Do you support a woman's right to choose?

If elected, a President Trump would solidify a conservative, reactionary majority on the Supreme Court for the next generation. He would attempt to pack the Court and the federal judiciary with extreme right-wing ideologues who would work to further limit women's access to safe, legal abortions as currently protected by Roe v. Wade.

One of the nominees Trump has proposed putting on the Supreme Court, former Alabama Attorney General William Pryor, has described Roe as creating "a constitutional right to murder an unborn child." Another, Diane Sykes, who sits on the U.S. Court of Appeals for the 7th Circuit, wrote a 2013 opinion in which she called some forms of birth control "abortifacient drugs."

6) How will you address systemic racism?

Trump has a documented history of racist behavior, statements, and actions dating back more than 40 years.

Trump's divisive record couldn't be more different from Hillary Clinton's, who has been a strong advocate for civil rights for most of her adult life.

7) How will you address the issue of 11 million undocumented immigrants?

Trump is playing with the lives of millions of undocumented immigrants in the United States by repeatedly threatening to deport them all, despite waffling on exactly how fast mass deportations would take place. Besides being logistically impossible, prohibitively expensive, and disastrous for the U.S. economy, such an idiotic plan would tear apart families on a scale unprecedented in our country since the WWII-era Japanese American internment camps. Hillary Clinton, by contrast, is sanely and sensibly committed to passing comprehensive immigration reform.

8) Do you agree with doctors and scientists that children should be vaccinated?

Trump is one of the most prominent celebrities who in recent years have spread phony anti-vaccine propaganda, and U.S. children have died as a result. 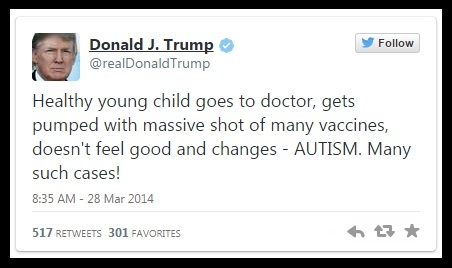 Hillary is the only presidential candidate who is unequivocally pro-vaccine. Trump is an unrepentant anti-vaxxer, and Gary Johnson and Jill Stein have both pandered to the anti-vaccine movement.

9) What community service in your past has prepared you for the job of President?

Trump's lack of any prior community service should disqualify him outright him for the job he's seeking. Electing Trump would be the first time in two and a half centuries of American history that voters chose a President with no prior government or military experience. He's never held public office before, which means he's never given voters a chance to see how he could handle a lesser office before asking them to trust him with the presidency.

Trump has never held an appointed position in any previous presidential administration. He hasn't represented his fellow citizens as Governor, Mayor, or even a City Council member. He's never helped run any sort of government body whose goal is to serve the public interest. All Trump has done in his 70 years on this planet is expand a business empire that he inherited from his father, while managing to bankrupt his companies several times.

In addition to serving in elected office as a U.S. Senator from New York and at the cabinet level as Secretary of State, Hillary Clinton has a nearly 50-year record of community service.

10) Do you have many lifelong friends? Tell us about one of them.

In Trump Revealed, an exhaustively-researched biography written by Washington Post reporters that came out in August, based in part on twenty hours of interviews with Trump, a shocking fact came to light. When asked about his friends, Trump said he had no time for any. "It was apparent that Trump had no friends, outside his immediate family," wrote the reporters.

What Donald Trump does have is a deeply-rooted addiction to fame, money, and attention. He almost certainly needs psychological help, but as these ten questions make clear, the last thing America needs is to put Trump in the Oval Office.

Erik Ose is a writer and political activist and blogs at The Latest Outrage.