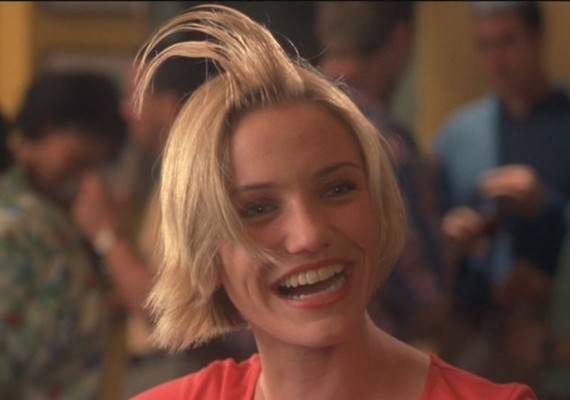 Our absolute favorite part of Gillian Flynn's novel Gone Girl is when Amy Dunne rails against the concept of the Cool Girl, also commonly identified in the field as a "guys' girl": "Men actually think this girl exists. Maybe they're fooled because so many women are willing to pretend to be this girl. ... I beg you not to believe that your man doesn't want the Cool Girl. It may be a slightly different version -- maybe he's a vegetarian, so Cool Girl loves seitan and is great with dogs; or maybe he's a hipster artist, so Cool Girl is a tattooed, bespectacled nerd who loves comics. There are variations to the window dressing, but believe me, he wants Cool Girl, who is basically the girl who likes every fucking thing he likes and doesn't ever complain."

Tell it, Amazing Amy! Here are ten things that we find super annoying about guy's girls:

They eat cold pizza and hot wings and drink beer out of a can in front of guys...but eat lettuce (hold the dressing) and
laxative pills
on ladies' nights.

They throw other women under the bus at the drop of a hat, making fun of them (in front of guys) for being giggly or girly or needy.

They don't complain about earning less than men, because guy's girls think being a
feminist
is whiny and uncool.

They love to agree with guys, especially when it comes to talking about how hot another woman is. Thanks to them, the MFF
threeway
has become just another way to be the perfect girlfriend.

They laugh at
sexist
jokes -- even
rape
jokes -- and say that anyone who doesn't laugh is simply missing the irony.

They
fake
orgasms, confusing guys as to what actually works for women.

They fake hobbies, too, trying on new likes and opinions ("I love playing
Call of Duty: Modern Warfare 2
") like they're trying on a new dress, to see which ones make them look
hottest
to guys.

But they never act like guys in any important, ground-breaking ways -- for example, they would never dare ask a guy out, or insist on coming first, or ask for a promotion at work, or vote for a female candidate for U.S. president.

Want to make amends for past "guy's girl" sins?
10 Ways to Be Less Competitive with Other Women