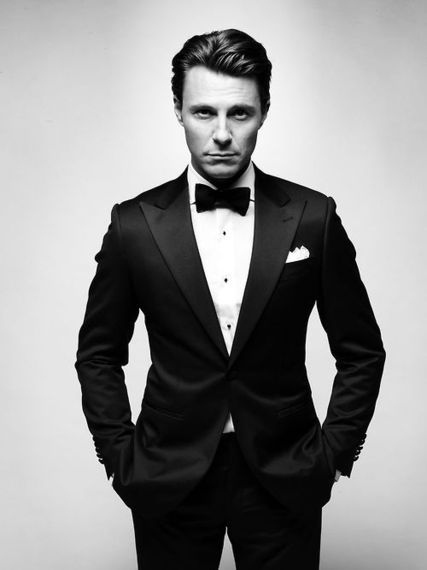 1. He's confident in his masculinity, which is a perfect match to your confident femininity.

Women want a man, but not just any 'ol man, but one who is extremely confident, extremely strong, extremely powerful, extremely SHIT-TOGETHER FELLA! He's one who knows he's a man, who deeply embraces it, and who relishes simmering in his wonderful testosterone marinade each and every day he lifts his head from the pillow. He is driven by something that is at the epicenter of his Bad Good Boy lusciousness, which is that he loves anything and everything about women -- the stronger, feistier, funnier, saucier, and sexier she is, the better.

2. He loves to give as much, or more, as he receives in the bedroom.

There's nothing better for a woman than when a man truly knows his way around downtown, and doesn't have to ask her for directions on where to go. A man who loves to not only please, but who is really good at it is a keeper, no?

The one thing that makes a Bad Good Boy so good for a woman is that he understands, on a fundamental level, that every time he is with his partner, the experience is going to be a unique one. She is never the same woman twice in the bedroom, and that is what makes sex so fun and exciting. No one knows where the sensual journey is going, how long it's going to last, or what's going to happen. What should be known, however, is that both participants are willing to fully surrender themselves to their sensual sauce they serve up together. Bad Good Boy gets that, oh so well, and that's what makes him so damn badishly good in bed.

3. He picks the right moment to make you the center of attention.

A Bad Good Boy, despite all his flaws (and there can be many), really really really (yes, three reallys!) understands how to communicate with a woman. Bad Good Boys are open and transparent with what they are thinking and feeling. Granted, at times, it may not be what you want to hear, but it's pure honesty, coming right at ya! When you bring a Bad Good Boy home, when he is with you, he is all about making you the center of attention.

When he's not with you, he might be on to other things, or other women, but you have accepted that as his Bad Boy side. Listen, if you sign up to be with a Bad Boy, even if he is a Bad Good Boy, you can't then claim to be a victim afterwards. With either a Bad Boy or a Bad Good Boy, as one woman recently told me, "there are no victims; there's just volunteers." You should know what you were getting into when you go out with a Bad Boy or Bad Good Boy. So don't whine if you don't hear back from him. One final thought on this before we move on, from another female reader: "Bad Boys are really just Good Boys gone wild."

There's a little secret out there that many women have shared with me -- they love to be taken when it's the right mood and moment. This is probably going to light up the comments board for this week's column, but the bottom line is that there are a number of women (remember, this is what they shared with me) who get tingles when, in the throes of passion, she's lifted up against a refrigerator or wall, pulled behind a car in a parking lot and pressed up against the car door, or led by the hand into a restaurant bathroom and placed on the sink. Moments like these are electrical, magical, and marvelous, and there's nothing wrong with it, at all, just as long as she's game. A Bad Good Boy knows when that moment presents itself, and he hits his mark, every time, when she gives him the sign.

5. He doesn't suffocate you with his own problems, and respects -- no worships -- your independence.

No woman has ever been attracted to a whiny man. A guy who goes on and on about his problems at work, his past girlfriends or exes, sounds more like a little boy who can't take care of himself than a grown man. Adult dating, I've found, thrives when both parties don't need each other, but want each other.

I recently sat next to a very professional woman on a flight who travels the world as an event planner for pharma conferences. She dates a captain of a ship, and she has a wonderful relationship with him, she says, because they are LATs -- Living Apart Together. I know another woman who dated a doctor for 12 years, happily, when she lived in New York and he was in Boston. One day, he wanted her to move to Boston. She didn't. The LAT was done. According to a study entitled "Living Apart Together" Relationships in the United States", published in 2009, one third of couples not married or who are co-habitating in the US are LAT couples. No wonder airline prices keep going up!

6. He knows he can be an asshole, but when he is, he's an asshole with a lower case "a" and is never a Capital A Asshole.

When I was married, my wife, when she got mad at me about something or other, would call me an "asshole," to which I responded "yes, I can be an asshole, but always remember that I am an asshole with a lower case 'a' and not a Capital A Asshole."

As we all know, there is a big difference between the two. Sure, the lower case asshole can get under your skin, can be self-serving and can be about all things him, but most of the time, he thinks of others, including you, and is caring, compassionate, and believe it or not, giving. Bad Good Boys fall into this lower case a-hole category.

A Capital A Asshole, on the other hand, is ALWAYS about himself, who doesn't care, at all, about you, unless it does something to serve his needs. He puffs his chest out with a huge A on it, and steps over everyone and everything in his way. Here's the worst part -- most Capital A Assholes are sociopaths, and if you see or sense one, you should run away from him as fast as your legs can carry you.

In the book The Sociopath Next Door: The Ruthless Versus The Rest of Us, a sociopath is defined as someone who is all about "controlling others -- winning -- is more compelling than anything (or anyone) else." The book goes on to claim that 1 out of 25 folks out there are sociopaths. The DSM V states that when it comes to psychopathy, men are three times more likely to be one than women.

We don't have to go far down the street to find a Capital A Asshole guy these days. I know one who broke up with his wife of just six short months. When they got married, he conveniently forgot to mention that he registered the communal house in his name only, and when he moved out, he conveniently forgot to tell her that he put the house on the market before she had a chance to retain a divorce attorney. How did she find out about him putting the house on the market? Her neighbor saw the listing, and knocked on the door to tell her. That's what you call a casebook Capital A Asshole.

7. He "gets it" when it comes to your intelligence and humor.

Connection is chemistry. Sure there is the physical attraction part, and that can't be denied, but a lot of chemical connection happens at the intellectual level, especially when it comes to the humor zone. It's my theory that there are two types of folks in the world -- serious ones, and funny ones. The two just don't mix. They are like oil and water. So, if you are one of the funny ones, you have to be with another funny one. When the person you are with makes you laugh, a lot, they are keepers, right? Bad Good Boys are funny, damn funny in fact. So laugh away.

8. He loves to explore everything, and wants you to come along with him for wild adventures as his co-pilot.

Living life, really living it, is about taking the road less traveled. It's about finding that little hole in the wall bar or restaurant, hiking trail, swimming hole, campsite, gallery, music venue, whatever, that you explore, with vigor. The same gusto for adventure should happen when it's just the two of you, as you explore new and different roads of joy and wonderment together. Bad Good Boys are all about finding out the answer to the ultimate question in the Talking Heads song "Once in a Lifetime": "Where does that highway go to?" And he's going to find out, with you, so strap yourself in, and enjoy the ride.

9. He looks amazing -- ok hot -- because he makes it a top priority to take great care of his body, but at the same time isn't full of himself (that's why he's not a Capital A asshole -- See #6).

Men today are being held to the same standards as women when it comes to being physically fit- as they should be. Bad Good Boys can be found, in droves, early in the morning, pumping iron at the gym, pumping up the hill in clusters clipped into their touring bikes, pumping their arms and legs in a lake, ocean or pool. They want to be healthy, happy, wealthy, and wise, so they are committed to working, and working out, improving themselves, each and every day. Why wouldn't you want to be with a fella like that? Exactly.

The internal combustion of a Bad Good Boy is passion. He's frothy, fiery, formidable. He's an incredibly intoxicating love potion for women. No woman wants to be with a Bore, especially when she's a fiery, furious, formidable female herself.

The irony of the word passion is that it is derived from the Latin verb pati which means "to suffer" according to the Merriam-Webster dictionary. If passion is suffering, then suffering never hurt so good when it comes to the Bad Good Boy.

Writer, Director, Producer, Attorney and Founder of The Farm