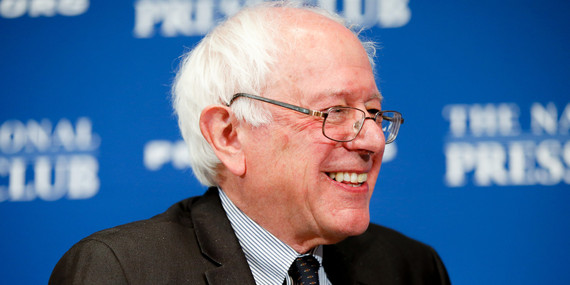 1. Bernie Sanders is now only 7 points behind Clinton in the latest NBC News/Wall Street Journal poll.

According to The Huffington Post, the latest poll shows Bernie Sanders only 7 points behind Clinton:

In the poll, conducted among Democratic primary voters Sept. 20-24, Clinton led Sanders 42 percent to 35 percent. While the new poll isn't necessarily an indicator of who will win the contest, the 7-point difference shows a big change from just two months ago. In July, Clinton led Sanders by 34 percentage points, with 59 percent to his 25 percent.

2, The email scandal is "defining" Hillary Clinton according to Gallup and making it difficult to discuss issues important to voters. In contrast, Bernie Sanders has surpassed Clinton in Iowa and New Hampshire, even though 25% of voters have "not heard enough" of the Vermont Senator.

According to a September 16, 2016 Gallup report, "when Gallup recently asked Americans to say what they recall reading or hearing about her, one word -- "email" -- drowned out everything else."

While Clinton's campaign is being "drowned out" by the email scandal, Bernie Sanders is gaining enormous support.

Most surprisingly, Gallup finds that, "when the responses of the 279 Democrats and Democratic leaners surveyed are isolated in a word map, 'email' trumps everything else."

POLITICO explains in Hillary's FBI nightmare that, "If the feds have Clinton's personal emails, too, some of them are bound to come out -- exactly as she feared."

So, it's likely that Hillary Clinton will be further embroiled in the email scandal while Bernie Sanders continues to focus on issues by February 1, 2016.

3. A recent CNN Poll finds that 42% of Democratic Primary voters back Clinton while 24% support Sanders. However, this poll (or at least its long-term relevance) is contradicted by various other polls illustrating voters don't trust Clinton.

Voters nationally don't trust Clinton; even within the Democratic Party.

Various factors (Bernie's appeal to voters, the FBI owning Clinton's computer server, etc.) have led to the polling trajectory allowing Sanders to ascend from 7.4% support on April 13, 2015, all the way to 27.1% on September 23, 2015.

According to a CNN/ORC poll in June, 57% of voters nationally say Clinton is "not honest and trustworthy."

Another CNN poll in August found that 55% of voters nationally have an "unfavorable" view of Hillary Clinton.

Even before the email scandal, there were issues about foreign donors. Rasmussen Reports find that, "65% of voters not affiliated with either major political party think Clinton is likely to have been influenced by donors" and "more surprising is that 45% of Democrats agree, including 23% who say it's Very Likely."

45% of Democratic voters according to Rasmussen Reports actually agreed that Clinton is "likely to have been influenced by donors."

Yes, even some Democrats have doubts about Clinton's honesty. Conversely, honesty is the bedrock of the Sanders campaign. People trust Bernie Sanders. I trust Sanders, which is why I'll be voting for him in 2016.

4. Women are leaving the Clinton campaign and supporting Bernie Sanders.

According to a new Washington Post/ABC News poll, "Where 71 percent of Democratic-leaning female voters said in July that they expected to vote for Clinton, only 42 percent do now, a drop of 29 percentage points in eight weeks."

In contrast, The Daily Beast writes that Bernie Sanders has gone from 2% support among Democratic women (in December of 2014) all the way to 27% support by the end of August.

5. The main reason that polls show Hillary Clinton ahead of Bernie Sanders is the belief that "non-white Democrats" will continue to support Clinton by a wide margin.

Without Biden, CNN's latest poll (showing Sanders ahead of Clinton) is bolstered primarily by the finding that states 72% support for Clinton among "non-white Democrats."

When the founder of Black Lives Matter in Boston calls Clinton's racial justice record "abysmal," Dr. Cornell West has endorsed Bernie Sanders, and groups like Latinos for Bernie Sanders believe Sanders is a better candidate, then momentum has shifted.

Quinnipiac University Swing State Polls in August for Florida, Ohio, and Pennsylvania report that voters have a negative favorability rating of Clinton and say she is "not honest and trustworthy."

Similarly, Quinnipiac University Swing State Polls in July for Colorado, Iowa, and Virginia reports that voters have a negative favorability rating of Clinton and say she is "not honest and trustworthy."

7. Bernie Sanders has surpassed Hillary Clinton in Iowa and New Hampshire for the same reasons Sanders will surpass Clinton in most other states.

The notion that "non-white Democrats" will choose a more conservative Hillary Clinton over the more progressive Bernie Sanders bolsters the view that South Carolina and other states will side with Hillary.

8. One look at the HuffPost Pollster interactive chart illustrates that Clinton won't be able to hold on to a lead.

Taking into account a number of factors, from the FBI to Clinton's trustworthiness issues, simply look at the Huffpost Pollster interactive chart if you question the belief that Bernie Sanders will win the Democratic nomination.

Since it's only Clinton and Sanders for Democrats, CNN and others should ask their poll questions in this manner:

Yes, statisticians everywhere are shaking their heads in dismay, but this question would more accurately address the two choices for Democrats in 2016.

10. The FBI is investigating one candidate's emails.

For voters, the legality of Clinton's email practices isn't necessarily the issue. The underlying theme of this scandal is Clinton's decision making process. Why did she need a private server and was it safe?

Not everything is a right-wing conspiracy; many of Clinton's scandals are linked to her decisions. The FBI as well as five other intelligence agencies continue to investigate Clinton's emails for a reason.

For the record, I'm not affiliated with the Sanders campaign. I'm simply a progressive who doesn't want a candidate that voted for Iraq (the only reason I wrote that article about Paul is because Clinton has a neocon foreign policy), evolved on social issues like gay marriage, and once supported the Keystone XL and TPP.

I explain why I'm voting for Bernie Sanders in a recent appearance on The Benjamin Dixon Show.

Bernie Sanders has already surpassed Clinton in the Iowa and New Hampshire polls for the same reasons he'll win the Democratic nomination. Along with the ten reasons above, basic logic dictates that he'll overtake Clinton in every major poll before the Iowa Caucus.