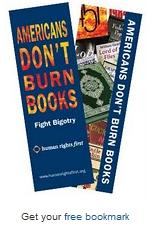 Opposition is mounting to the "Burn a Quran Day" scheduled for September 11th in Florida. General David Petraeus said it could harm our troops, Secretary of State Hillary Clinton called it unrepresentative of Americans. Attorney General Eric Holder called it "idiotic and dangerous," and the Vatican has called the planned demonstration "outrageous and grave."

But the event planners, Terry Jones and the Dove World Outreach Center, are moving forward in spite of the outcry. In fact, they posted five MORE reasons to burn a Quran on their blog just yesterday.

Human Rights First has compiled our own list -- we asked our supporters to submit reasons NOT to burn a Koran. We received over 5,000 responses. Below is the Top 10 list:

Ten Reasons NOT to Burn a Koran

You can make a stand with us. Show the fearmongers and the world that Americans don't stand for bigotry by ordering your free "Americans Don't Burn Books" bookmark (you just need to cover shipping and handling).

Help us urge other leaders--including former President George W. Bush--to speak out against bigotry. He and members of his administration spoke out for tolerance and freedom of religion during his presidency. George W. Bush could make a difference by speaking out now.

We need everyone to speak out -- Democrats, Republicans, and Independents. Join our efforts--get your bookmark and carry it proudly!