When we arrived in the United Arab Emirates (UAE), just over 10 years ago, the Indian guy from my company who collected us from the airport chatted the whole way to the hotel, giving us a detailed introduction to the country, culture, and society, while extolling the virtues of living in Dubai compared to Abu Dhabi, where we'd just moved.

"... and Dubai has a shopping festival!" he proclaimed rather proudly. In those days, Abu Dhabi didn't even have a mall so we had to drive to Dubai to do any real shopping, like buy an espresso machine for the apartment. But a shopping festival was something else! Admittedly, we thought this a little weird... what kind of country has a festival dedicated to shopping?

Although Abu Dhabi now boasts a few big swanky shopping centers, Dubai, with its scores of malls and atmospheric bazaars is still the region's King of Shopping. And according to Terry, I'm the Queen of Shopping. So, here's my Ultimate Dubai Shopping Guide, or, 10 Reasons Why You Should Shop Dubai. 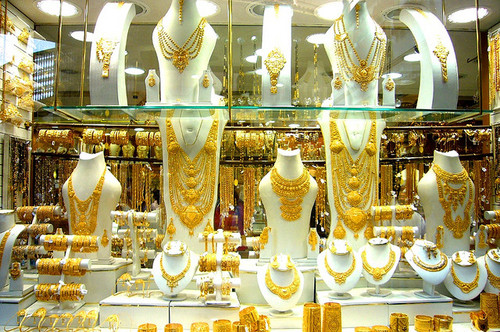 The Dubai Shopping Festival, or DSS as we call it locally, has become much more than a festival of shopping. Sure, it's the huge discounts, crazy promotions, citywide sales, and raffles with Porsches as the prize that get us excited. But there's also entertainment for the kids, street fairs with food stalls, nightly fireworks, and at the Heritage and Diving Village, traditional performances and cultural activities.

Held in January and February, the UAE winter, the weather is lovely. It's still warm enough to swim and tan by day, but in the evenings you need to pop a pashmina around your shoulders. The big disadvantage is that this it's high season (and conference season) so hotels are expensive and you need to book well ahead. Like, now.

Dubai Shopping Festival became so popular that they started a summer equivalent called Summer Surprises. Even more family-oriented, as the kids are on school holidays, there's a festival mascot called Modhesh which looks like a yellow bicycle pump. A summer version of DSS, held annually from the end of June to the end of August, there are sales all over the city, but the major advantage of the summer festival -- if you can drag yourself away from the Olympics -- is that hotel rooms sell at rock-bottom prices.

Keep in mind, though, it's a sweltering 45C (113 F) degrees outside, your glasses fog up each time you step out of the hotel or taxi, and the whole time you're there you'll feel like you're in a giant sauna or God has placed a big blow heater above Dubai. It's an experience. 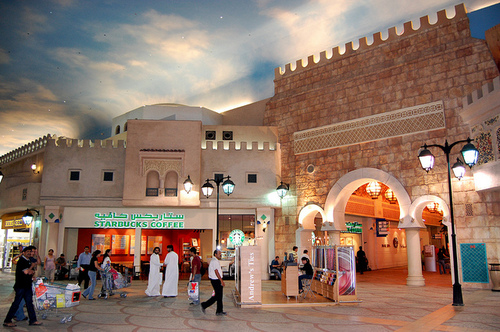 I'm not a fan of malls generally but in Dubai, the mall makes sense. Remember, this is a place where it's too hot to stroll the city streets for half the year. In Dubai, the shopping mall is a relief. And here, malls are about so much more than shopping.

They're a place for socializing, for meeting up with friends for coffee, a movie or bowling, for hanging out with the family at a fun fair or eatery, for slipping on the skiis to swoosh down the slopes in preparation for winter, or heading to the gym, spa or beauty salon to get into shape for the summer.

Dubai's malls also boast theaters, art galleries, child minding centers, and even mosques. Think of them as the equivalent of an old town square, piazza or plaza in Europe. 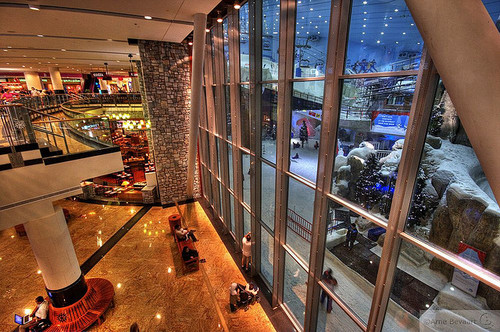 If I had to choose one mall out of the city's scores of shopping centers, it would be the opulent Mall of the Emirates. This sumptuous shopping center is one of the city's largest, but also one of its most beautiful, with polished marble floors, spacious avenues and a stunning skylight. It boasts the best selection of shops, with several swellegant department stores, including swish Harvey Nichols, dozens of chic boutiques, exclusive designer stores, fantastic shoe and accessory stores, cosmetics supermarkets, a massive Virgin Megastore and Borders bookshop, cinemas and theater, art galleries, a theater, Ski Dubai (yes, that huge indoor ski slope you've read so much about), and superb restaurants, including Emporio Armani Caffe and Almaz by Momo (by Mourad Mazouz of Momo London fame), bars (Apres), and a hotel, the swanky Kempinski Mall of the Emirates.

While Dubai boasts an abundance of sleek shopping malls, the bustling souqs (Middle Eastern-style bazaars) are actually what Dubai has historically been famous for. The Deira covered market was once the Arabian Gulf's largest - remember, Dubai has been a trading port for several centuries.

The city's souqs may not be the region's most attractive -- get images of Marrakesh or Istanbul out of your head -- but they're just as atmospheric and easily as fun.

The difference is Dubai's souqs are real. Gritty and ramshackle, they're not just for tourists, they're where the real people shop for everyday things. In Deira and Bur Dubai's souqs, Emirati girls shop for fake Yves Saint Laurent shaylahs (headscarfs), their mothers haggle for stainless steel pot sets, their grandmothers buy oud (aromatic wood that's lit like incense), while their brothers, husbands and dads bargain for the latest digital gadgets.

English expats take visiting guests to gawk at the glittering gold souq, Indian expats buy saris and textiles from home, while expat workers from Afghanistan and Bangladesh stock up on basic goods to take home, from woollen blankets to cheap kids' clothes.


#6 - Because in Dubai Bargaining is a Fine Art

Part of the fun of shopping Dubai's souqs is bargaining, or haggling. It's not a requirement, as in Cairo, Istanbul or Marrakech -- if you don't want to play simply ask the price, you'll be told a price, and you can pay that price. And believe me, I'm an old hand at it, and it can be exhausting and it's not always fun. But if you pay the first price you're given, understand you're probably paying double the value. It's probably still a bargain compared to what you'd pay back home, but you can get it for a whole lot less, and have fun in the process if you bargain.

So, where do you start? Ask how much then when offered a price, suggest 50 percent less. The salesman will probably laugh or feign horror and offer a higher price. Stick to your guns. He'll then drop the price and once he does, you should raise yours a little. And so it goes...

Use your instinct to respond to his reactions and adjust your price accordingly. As the process draws to an end, ask for the final and best price. If the offer seems reasonable, pay up. Don't go back to your initial offer -- or worse, leave! -- this is extremely rude. The sales guy won't welcome you back when you later realise his offer was a good deal and he'll probably spread the word around the market so you get ripped off elsewhere. While bargaining in the souqs is acceptable, it's not in a mall, unless it's at a carpet shop. At small independently owned electronics, computer or camera shops, you can ask for discounts, but offer 50% less and you'll be laughed out of the store. 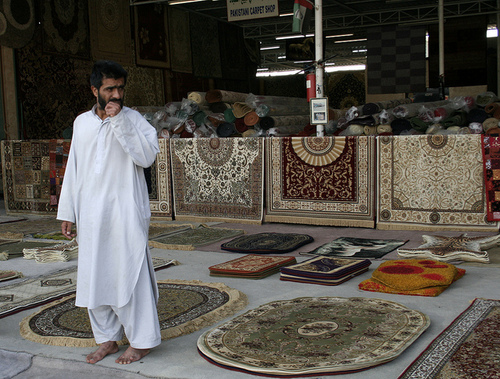 Dubai's best buys are the things we associate with shopping the Middle East -- carpets, textiles, perfume, spices, gold, frankincense and myrrh. Seriously. Dubai's Spice Souq may be small and a lot more touristy now than it once was, but a stroll here is an aromatic assault on the senses -- great buys include tiny boxes of saffron, frankincense (the sticky golden rocks of resin in the big sacks), incense burners, and do-it-yourself henna kits.

Deira's Covered Souqs are the place to shop for bellydancing outfits, traditional costumes, sheesha pipes, and at the Gold Souq, anything that glitters. Bur Dubai's Textile Souq sells Indian saris, vibrant fabrics, spangly Aladdin slippers, Dubai t-shirts, and Arabian 'antiques'. Karama Souq is not so much a souq but a rather shabby shopping center, but it's the best place for discounted souvenirs from the region: Arabian bronze and copper coffee pots, engraved trays and Aladdin lamps, Yemeni khanjars (daggers), Bedouin silver jewellery from Oman, colorful Moroccan lamps, sequinned and beaded cushion covers and bedspreads from India, and mother-of-pearl inlaid boxes and furniture from Syria. 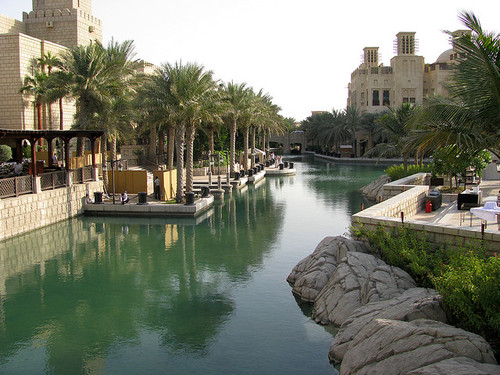 This stunning, air-conditioned, contemporary incarnation of a souq is the place to head when you can't face the chaos of the real souqs, the heat has got too much for you, you're not in the mood for bargaining, or, when you decide to refuel, you want to have a cold beer or glass of wine with your lunch.

At this beautiful "Old Arabian" styled shopping center with wooden arcades, wind-towers, and lovely courtyards, you can shop in comfort for fine quality carpets, handicrafts, souvenirs and gifts, and the best stores for those are Lata's, National Iranian Carpets, the Pride of Kashmir, and Al-Jaber Gallery. Prices are obviously higher than at the souqs, but the quality is better. You'll also find fashion, jewellery, leather and accessories, and dozens of restaurants, cafés and bars where you relax and ponder your purchases, make new shopping lists, or assess the damage to the credit card.

Dubai may have made its fortunes on the import-export trade, but there's actually some wonderful stuff produced in Dubai by Emiratis, and one of the standouts of interest to shoppers is its homegrown fashion. The biggest local name is quirky young Dubai-born designer Raghda Bukhash, who creates fabulous fashion under her Pink Sushi label, by playfully appropriating traditional Emirati culture and symbols.

The black and white Palestinian keffayah or red and white gutra (Arab men's headdresses) are all the rage in Europe right now, but Raghda was the first to use them to produce cute skirts, handbags and clutch purses. You can buy her hip fashion from chic fashion boutique, Amzaan, owned by local princess Sheikha Maisa al-Qassimi. Other independently owned boutiques stocking local Dubai fashion as well as interesting international labels include Five Green, Ginger&Lace, and S*uce. 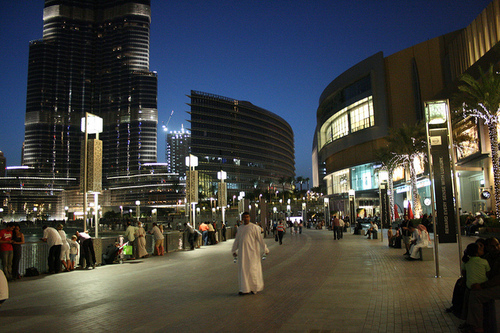 Shopping malls in Dubai open from around 10 a.m. to 10 p.m. daily (although a few don't open until 2 p.m. on Friday, the Muslim day of worship, like Sundays in the West), which is bliss for shopaholics on a stopover! Stores outside of malls, especially those in the souqs, close around noon for an afternoon meal and rest, opening around 5 p.m., which makes sense in this kind of heat.

Shopping in Dubai is most fun at night when the locals go out to shop, so even if you don't like shopping you can enjoy some people watching instead. This means you'll end up eating late and hitting the pillow late, but what are days for if not dozing in the sun by the hotel swimming pool?

Read more about things to do in Dubai