I want to smash my cell phone. Seriously. I want to smash it into hundreds of pieces. And then, I want to mix those jagged pieces of broken electronics with C4 and blow them up just to be 100% certain they can't be reassembled by a team of savvy forensic engineers. Or, the on-air talent from CNET.

Why do I want to smash my cell phone? Is it because my cell service sucks? Nope. In fact, my cell service is just fine. Sure, my phone drops calls when I'm in an elevator, a mountain pass or an underground garage... but, sometimes I do get four bars in a crowded elevator and I think to myself, "Amaze-balls. I'm in an elevator. On the phone. Talking to my doctor about my bowel movements!"

No. The reason I want to smash my phone is that its magical utility has made my life entirely frictionless, its 24/7 connectivity has made my experiences trite to those I choose to share them with, and even worse, and it has made me the flight attendant of my own life, instead of the passenger. Here. I'll explain.

1. Just like with sex, if you're not doing stuff that makes you nervous sometimes, you're doing it wrong. 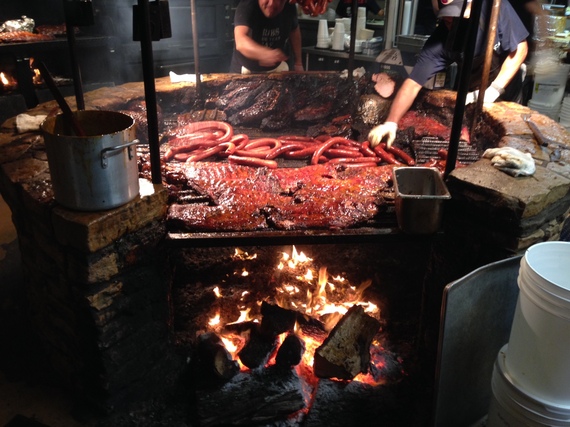 This past weekend, I was in San Antonio, Texas. 72 miles away from where I was staying is a place called The Salt Lick, it's one of the best BBQ joints in the world. I used my iPhone's map program and in about three seconds, I had turn by turn directions from where I was standing... along with an estimated time of arrival. So, off I went. And no surprise, I made the 72 mile drive in 97 minutes, just like the map program said. After I'd eaten a plate of the absolute best brisket and ribs I thought about my 72 mile drive. It started on one highway, switched to another, then another, then to a two lane road with traffic lights, then to a long series of rural roads, multiple turns, etc.

Fifteen years ago, if I had wanted to make this 72 mile journey, the concierge at my hotel would have written down directions for me... and 15 minutes into the trip, I'd have been lost. Then, I would have seen something I didn't expect to see. I would have had an experience I hadn't planned for. I'd have gotten lost. I might have run out of gas or peed on the edge of a cow pasture... then run like hell when I heard a "moooo." I'd have pulled over at a gas station to get directions and would have bought a bag of the locally grown, hand-made tortilla chips, or rolled down a window to ask a farmer "Where am I?" I would have laughed with my cousin -- who's sitting in the passenger seat -- when we couldn't remember if the farmer said make a left or right when we drive past the third gun range. Or, if we were supposed to turn at the fireworks stand... or keep going straight.

2. Don't be the flight attendant in your life. Be the passenger.

Not more than five minutes after I had arrived at The Salt Lick, I got a series of texts from my wife demanding to know: "Are you there yet?" "What's the brisket like?" "Is it amazing?" and "What are you wearing?" OK. I made that last one up. Anyway -- long before I have a chance to actually have the experience of arriving at what is perhaps the world's best BBQ joint, before I figure out if I'm supposed to order at the counter or wait to be seated and before I have an opportunity to enjoy perfectly cooked brisket, ribs and sausage -- I'm asked to explain via text where the life rafts are, how to put the seat belt on, and where to stow your carry-on bags. While staring at The Salt Lick's indoor BBQ, which played home to nearly 50 full sized briskets, several dozen 3 foot long sausages, dozens of chicken breasts and countless center-cut smoked ribs, I realized if I answer the texts or make a call or send an email right now, I stop being the passenger in my life... and I become the flight attendant.

I want to be the one to hear the instructions... or, in this case, to hear that use center cut ribs, not baby backs, which they smoke for just three hours or if I ask nicely, the BBQ pit master will let me flip some of the meat while my cousin takes a photo or that for $15 bucks, I can get one plate that will have brisket, ribs and sausage... But, for just $5 bucks more, I can have as much of that meat as I can pack away. I ignored the texts, took a bunch of photos and bought my wife a Salt Lick hat and when I arrived back at the resort where we were staying, we had a lovely 20 minute conversation about the world's best brisket and ribs -- all of which was new to her, because she hadn't heard it all two hours earlier, via text.

3. Your phone is making you more stupidly.

According to several recent scientific studies, you are less likely to recall and or learn material that you read on your cell phone or laptop or tablet. Meaning, material or content that is presented to you digitally, rather than in a traditional paper book or magazine, is not going to be stored in your brain in the same way as the same material would be were it printed on paper. Digital material is often read more quickly, more casually and in less than idea circumstances, for instance, while driving on the highway. Or sitting on the subway. Or while having sex. OK. I made that last one up. Or, did I?

4. Your cell phone is plotting your sudden and tragic death.

One in five automobile crashes result from a distracted driver. HOWEVER -- texting while driving isn't the only incredibly stupid thing people do with their cell phones. Instead of talking to the friend you're having lunch with, you're sitting across from the friend you're having lunch with... while checking your phone to see what the stock market is doing or who Lindsey Lohan is doing. Anyway, although all of us engage in one activity or another during the day, we simultaneously are engaged in a parallel activity on our phone. Texting, reading, game playing, etc. What's going on on the phone is robbing us of the experience we are currently not having.

5. Everyone's life is better than yours. And your life sucks.

According to a recent scientific study, Facebook could be making you miserable. Or worse, clinically depressed. As you watch the Facebook timeline scroll down your computer screen, you are inundated with images of your friends, acquaintances and people you went to high school with -- and they are having an awesome time. They are celebrating a birthday. They are taking a selfie with P. Diddy. They just got a promotion. Their kid just came in 2nd in a soap box derby. They're headed to Vegas. Without their spouse. They caught the possum that's been living under their house.

Meanwhile, you're sitting at your kitchen table in your feetie pajamas, crying into a bowl of Cap'n Crunch for the fourth night in a row, because you got laid off from your job and you can only afford to eat meat twice a week now. Turns out, seeing people having fun, living it up, and being successful will depress the hell out of a person. Even if we know that the other person is really a liar and that their life is also shitty and that their wife is cheating on them with the gardener. Seeing photos of success just makes people feel bad about their own lives.

6. You know that email that you must. Respond. To. Right. This. Instance? Yeah. It can wait.

Fifteen years ago, if you worked on the west coast, and someone on the east coast needed some drawings you had put together, it would take about three or four days to get those drawings across the country. And that was good. The person who had the drawings could figure out where they are, then wrap them up, get them to the post office and send them on their way. The person who needed the drawings would do some other work until the drawings showed up.

Now, if you need to see the drawings the person who has the drawings better fucking be at their desk when you call, and their internet better fucking work, and they better be available on Skype to talk, and they better have a scanner that captures images in a high resolution because that's what the boss damn well wants, and the software better not have a bug, and it better be in color, and the file better not be too big... Oh, you get the idea. All of this 24/7 connectivity turns a job that used to be nine to six... into a job that's 24/7. I don't have a study to point to, but it can't be good if you're thinking about work all the time.

A debate that previously seemed settled -- that there is no link between cancer and cell phone use -- now appears to be ever so slightly less settled. What to believe? I don't know. HOWEVER -- on a list of reasons to smash your cell phone, I'd be remiss if I didn't at least bring this debate to your attention.

8. Yes. The brain seems to have an infinite ability to process information. However...

9. Posting on your Facebook timeline is not the same as actually seeing your friends.

10. Why do I need to know that Courtney Love thinks she sees airplane debris in the Indian Ocean?

And what is the device you use to access this information that you don't need to know? Your cell phone. And yes. I want very much to smash mine into a million pieces. And I am planning on doing it. I swear I am. I'm going to get a hammer and some C4...

Just as soon as my wife texts me a list of stuff she needs me to pick up at CVS.

Jon Hotchkiss is the creator of the new 6-hour science series, This vs That, featured on NBC News with Brian WIlliams & called "Hilarious" and "Revolutionary." You can see the 1-hour series premiere, FREE.