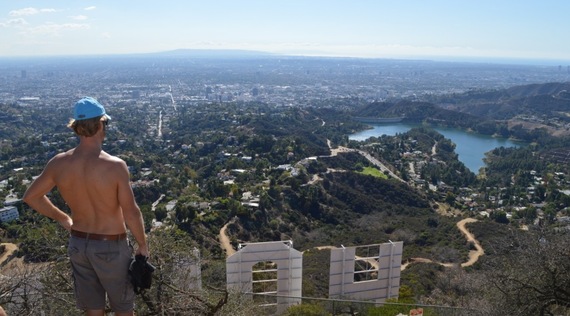 In case you missed the bulletin, Los Angeles is in the midst of a historic drought. We also have the nation's worst traffic and air pollution, and we're the least affordable city in the Lower 48 for millennials to buy a home. To add insult to injury, we still don't have an NFL team to distract us from our problems. But here's something your parents and grandparents would never admit to, so take it from someone who's approaching his 50th year as a native Angeleno: We're in the midst of a Golden Age. Here are 10 ways the City of Angels has improved upon its recent past.

1.AIR QUALITY. While our air continues to get low marks, things used to be worse - a lot worse. From the 1950s through the '70s, "First Stage Smog Alert" days dominated public discourse, often forcing school children to stay indoors. In 1975 alone, there were 118 "Stage One" Alerts - 1 for every 3 days. All I had to do to measure the smog was simply breathe in. A sharp spasm in my lungs triggered coughing jags like people now experience in Beijing. Thanks to the nation's strictest emissions standards, by the year 2000, the city had reduced "Stage One" days - and the number of 8-year-olds mistaken for smokers - to zero.

2.TRANSPORTATION. In the '60 and '70s, our transportation options were soot-belching RTD buses or lead-gas-guzzling, non-catalytic converter cars. "Subways" back then referred to the scary underground pedestrian tunnels that doubled as Cold Era fallout shelters. The last 20 years, however, have brought rail options back to Los Angeles, to the point where the city's transportation projects form the nation's largest public works program, and where going carless is no longer a ticket to isolation but a money-saving badge of clean-energy cred.

3.WALKABILITY. When city planners dreamed up L.A.'s post-World War II future, it contained hundreds of miles of freeways and bridges without sidewalks, a very clear message that the car was king. Pedestrians? Puh-leeze, we'd all be flying around in jetpacks soon anyway. But good ole' walking - that oldest of American pastimes - has returned with a vengeance. These days a neighborhood's walkability is touted by real estate agents, developers, and other Los Angeles apologists. The city's walkability index, of course, is an extension of our improved...

4.OUTDOOR CULTURE. You know that farmers market you love to frequent on the weekend? Once upon a time there was only one Farmers Market - the original tourist magnet at 3rd and Fairfax. Now there are dozens throughout the region, part of a gradual movement toward locality and being outdoors to enjoy our great weather. Malls are tearing off their roofs, roads are going on diets to accommodate bikes, and people are watching movies outdoors. What next? Parks springing up over freeways?

5.RESTAURANT OPTIONS. Do we really need another artisan pizza eatery that's all the rage? No. But in the '70s, when our only pizza options were Shakey's, Straw Hat, or some square-pan food court crap, I would've settled for one Mother Dough. The city's transformation from a culinary wasteland to the smorgasbord of choices we enjoy today is perhaps the starkest change on this whole list. And chew on this: We old-timers once had to venture all the way out to the Woodland Hills In-N-Out to get our Double-double fix. Now there are more than two dozen In-N-Outs in the L.A. area. Need I say more?

6.SAFER AND LESS CORRUPT. Though questionable police killings continue to make headlines, the Los Angeles Police Department under chiefs William Parker and Daryl Gates was rife with corruption at a time when Los Angeles was experiencing record crime. Today's historically low crime rates have correlated with more transparency, accountability, and neighborhood outreach by the LAPD. Just as safety concerns discourage business development and nights out, the flip side is also true.

7.HOLLYWOOD'S RETURN TO GLORY. When I was in high school, movies like Valley Girl spoke the truth: If you wanted to dance with danger, head to Hollywood. Pimps and hookers flooded Hollywood and Sunset boulevards, and you had to step over spent heroin needles to brave shady dance clubs like the Seven Seas. Homelessness persists in this part of town, but gentrification, urban housing, and entrepreneurial energy have led to a Hollywood renaissance that isn't just another false start but looks to actually stick around.

8.THE VALLEY GETS LEGIT. As recently as the movie Swingers, the "818" area code was ruthlessly mocked. But the Valley's inferiority complex has been over for a while. Credit rising rents and traffic on the Westside, which has pushed many restaurateurs, businesses and the families that patronize them over the hill (and to points east like Highland Park and Silver Lake). Ironically, the biggest concern nowadays is how to avoid the Westside-ization of the Valley, where horse stables and very big choo-choos are a big part of its DNA.

9.A RIVER'S REBIRTH. Ah, the L.A. River. In the 1970s, it was a punchline. Johnny Carson cracked jokes about it, and movies like Grease used it to stage car races. Now it's a lifeline, with a replenished water flow that draws waterfowl, fishermen, and kayakers, its banks hosting 27 miles of bikeway. Not that long ago, no one could imagine wanting to actually live along the river. Now? Bids start at half a million dollars.

10.VIN SCULLY'S ENDLESS MOJO. Remember listening to Laker games in the early 2000s? Chick Hearn, their iconic announcer, had clearly lost a step in his twilight years. Now in his 66th year of broadcasting, the Dodgers' Vin Scully doesn't just still have his fastball, his repertoire of colorful anecdotes has only gotten richer, his mind sharp as ever. Savor this 87-year-old legend while you still can. That is, if you can. Most of us still can't tune him in on TV. (Okay, so I guess there's one thing that's gotten worse.)