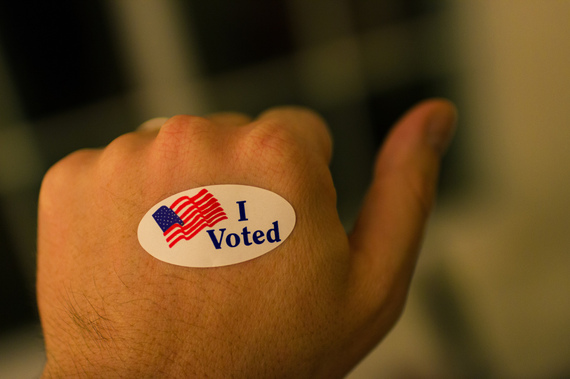 Four years ago on November 6, 2012, millions of potential millennial voters were missing in action -- or, more accurately, were missing from action. Why? Only 46 percent of 18-35 year-olds eligible to vote actually got themselves to a polling place -- the nonvoters could have drastically changed the results of any election. It's a vicious cycle -- too many young would-be voters don't vote and consequently too few elected officials pay attention to their needs.

This election must be different. Here are 10 compelling reasons to mobilize millennial voters -- starting with yourself.


Reproductive health and bodily autonomy. You want your personal beliefs to be respected when making decisions about your own body, and your boss's personal beliefs left out of the equation entirely. You want the option to obtain birth control through your health plan, regardless of who provides your insurance. You don't want to worry about your health center being forced to close because a lawmaker doesn't like it. And, if you decide to seek abortion care, you want it to be affordable, accessible, and provided without interference from politicians.

Affordable health insurance. If you work for an employer who doesn't offer health insurance or are part of the gig economy where it is not available -- or if you are over 26 and kicked off of your parents' plan -- you want Congress and the president committed to keeping affordable, comprehensive health insurance available. (Check out healthcare.gov today to find a health plan that meets your needs and see if you qualify for financial assistance through the Affordable Care Act, AKA Obamacare.)

A higher minimum wage. You need a $15 minimum wage -- even if you expect to make more than $15 per hour, employers peg entry level wages to the going minimum wage rate. So if the minimum wage goes up, so do the wage rates just above it.

Affordable higher education. Without a college education you will earn one million dollars less over your lifetime -- starting now. If that seems hard to believe, median earnings for those between 25-34 years of age with only a high school degree are $30,000 a year -- with a bachelor's degree or higher, $52,000. The disparity holds true for women and men of every background.

Paid leave. If you're planning on having a baby or adopting a child, you'll most likely require paid parental leave (a concept familiar to every other industrialized country other than ours). Yet, most jobs don't offer paid leave, viewing it a luxury perk rather than every family's necessity. And you definitely need paid sick days should you or a family member be ill -- already enacted in 5 states, 29 cities, 2 counties, and Washington, DC -- but not nationally.

LGBTQ rights. If you care about ensuring respect for different gender and sexual identities, we're guessing that you want to keep the civil rights recently won after decades of struggle, and see passage of a federal law barring discrimination against LGBTQ folks. You believe everyone, regardless of gender identity or sexual orientation should be able to live a healthy life free from violence, with dignity and fair treatment under the law.

Common sense gun policy. Between 2010 and 2014, an average of 32,964 people living in the US died in homicides, suicides, and unintentional shootings - more than 91 deaths each day and more than 3 deaths each hour. Of these, 20,511 committed suicide. On average, 78,815 people were treated each year in hospital emergency departments for non-fatal gunshot wounds. For your own safety and security on campus, in your neighborhood, your local movie theater, favorite night club, or shopping mall, you want common sense background checks for everyone who buys a gun. Plain and simple.

A criminal justice system focused on justice. No matter your race, religion, or national origin, you want police brutality to end, and for black lives to matter in the eyes of all of our police officers. You want a system that ends mass incarceration and racial disparities at every level, and focuses on rehabilitation and restorative justice.

The Supreme Court. You expect the US Supreme Court to protect your constitutional rights, including your right to make personal decisions about your own body. You want a president that will fill court vacancies with judges and justices committed to ensuring voting rights, putting people above corporations, and preserving religious liberty.

Our planet's health. And last but certainly not least -- you want a planet that remains viable and healthy into the very distant future and a government that helps that happen, not one that makes failure inevitable by denying the science of climate change. After all, we want to be around long enough to see real social progress happen.