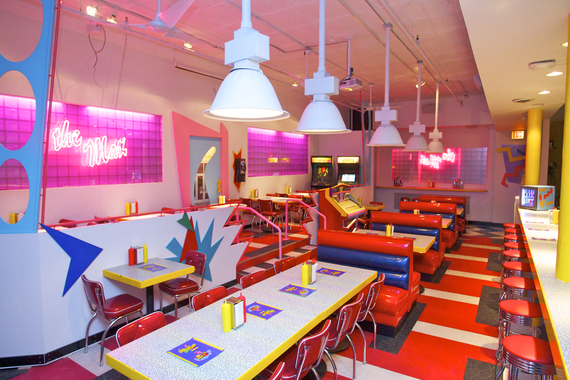 Last week, my niece CJ and I went to the Saved by the Bell-inspired diner, Saved by the Max, to celebrate the end of seven months of physical therapy and recovery from surgery. Saved By The Max, located in Chicago's Wicker Park, far exceeded my expectations. I mistakenly thought The Max was going to be nostalgia with a side of fries. But the pop-up diner was so much more than that. Once I stepped into The Max, I was transported to another place in a time, a less cynical time before we were constantly plugged into our devices. A time when we actually called up our friends to go out, when we passed notes in class, and when you broke up with someone face to face -- not over text messages. With its neon signs, candy-colored walls, and vintage arcade games, a trip to Saved By The Max is a trip to the late 1980s or the early 90s.

Here are the top ten reasons you should go to The Max: 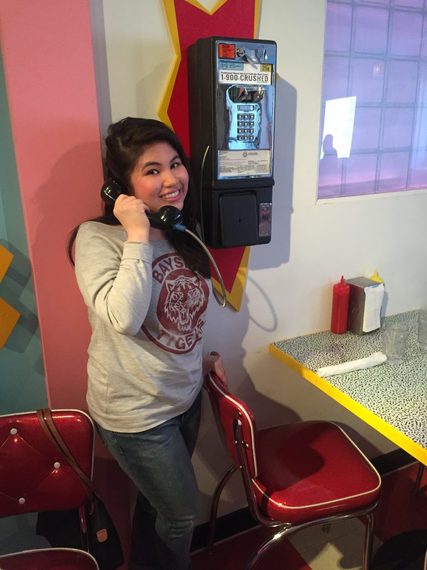 #10 - The opportunity to show your kids what a pay phone is: Next to our table, was a thirty-something couple. They had two toddler-aged children with them--a boy and a girl who (like me) were wearing grey Bayside Tigers shirts. The couple used the phone to explain to their children what a pay phone is. Everyone wanted a picture with the pay phone. 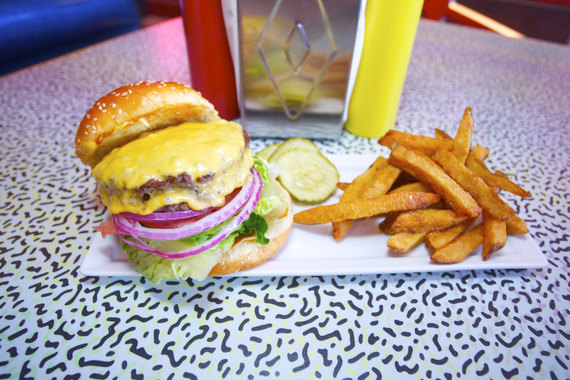 #9 - Generous portions: I was pleasantly surprised by how huge the portions are. When you make reservations (I recommend making reservations to get the full experience; tickets for months June through July sold out in minutes when they went on sale in April), you purchase a three-course meal that includes an appetizer, entrée, and dessert. I had the Mac & Screech for my appetizer and it was every guilty thing you want in your macaroni and cheese. For my entrée, I had the juicy Bayside Burger with a side of Mr. Belding's Fries (photograph taken by David Miller), which had two patties. I had enough leftovers that lasted through lunch the next day. 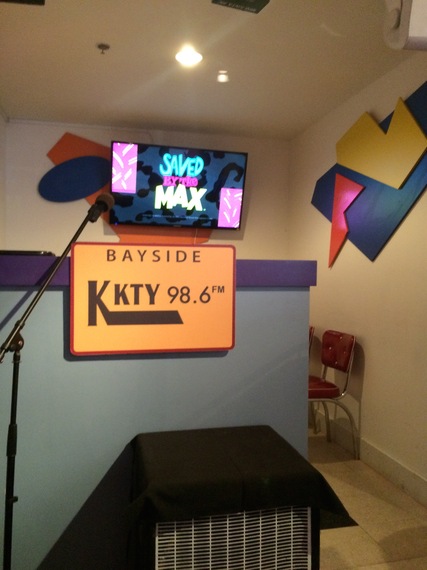 #8 - The music: When you step in The Max, you're going to hear music from the show itself and music from the era; they even played the Bayside School Song. Also, the intro and outtro music tunes made me feel like I was in an episode of SBTB. Remember KKTY 98.6 FM, the school's radio station? The Max even has a DJ spinning records. When we were there, the DJ played Bobby Brown's My Prerogative and Janet Jackson's Miss You Much. My only regret is that they didn't play Jessie and Slater singing How Am I Supposed to Live Without You--but maybe that's an unhappy memory since that's from the episode where Zack and Kelly break up over Jeff. Speaking of Jeff... 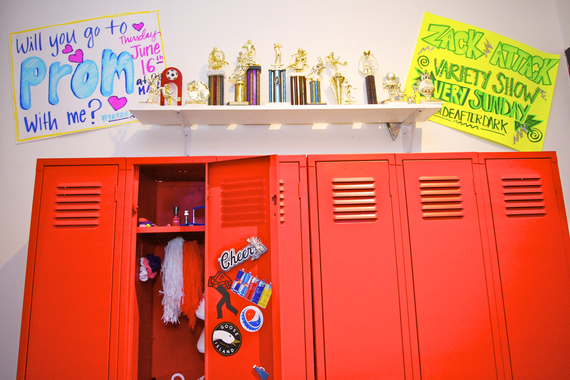 #7 - The friendly staff and Bayside After Dark Events: Our waiter's name was Jeff. Of course, he was not that Jeff. (In fact, he had blonde hair.) The friendly staff is decked out in authentic uniforms from The Max--those red shirts and black bottoms. The restaurant also hosts Bayside After Dark events with SBTB trivia, aerobics, karaoke fun, and celebrity meet & greets late at night--you can check out coming attractions here on Facebook. 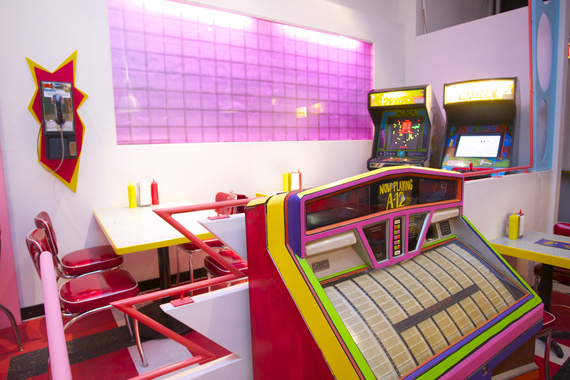 #6 - Classic Video Arcade Game Machines and a Jukebox (photograph courtesy of David Miller): Remember Kung Fu Master and Centipede? Saved By The Max has video game machines! These are real machines you can play--not props. 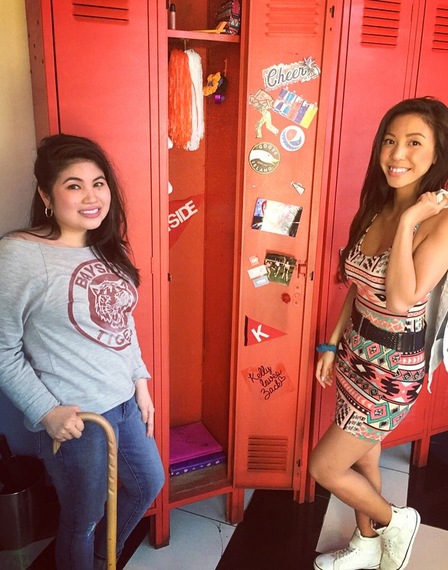 #5 - Photo-Ops Galore: The restaurant's owners have recreated the halls of Bayside; you can take a picture with the open lockers featuring a picture of George Michael, pom poms, white KEDS shoes, and a poster above asking, "Will you go to prom with me?" 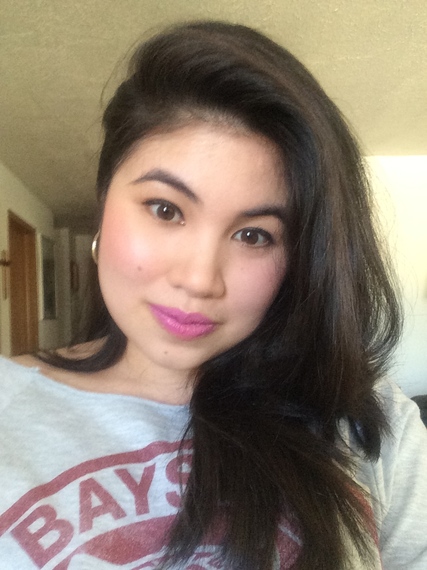 #4 - Excuse to Have Big Hair: I think I used more hairspray last Tuesday at The Max than I've used in the past ten years of my life. Going to The Max is the perfect excuse for teasing and backcombing to the extreme. I created this Kelly Kapowski leaning tower of hairspray using this YouTube tutorial from All Things Hair, UK. Men can get an AC Slater wig here. 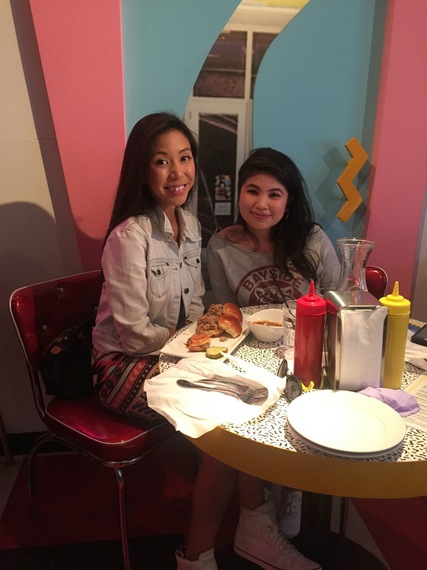 #3 - Candy-Colored Walls: I've never seen anything like this before; it's like the art from the opening credits came to life. Heck, even the bathroom walls were cute! The attention to detail from the neon pink Saved By the Max signs to the tiles and hanging light fixtures is impressive. 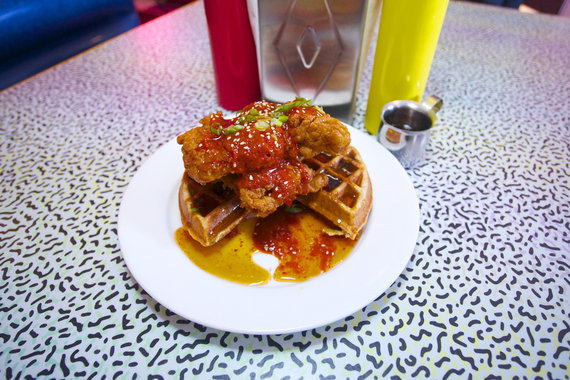 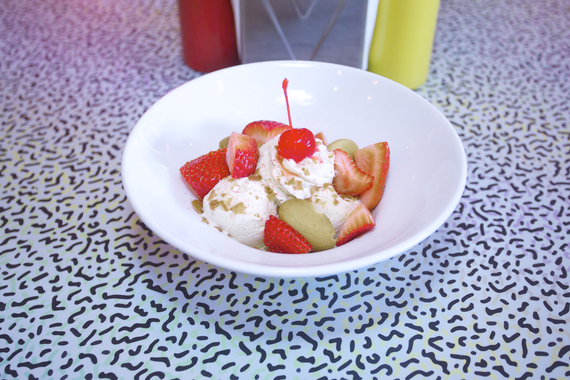 #1 - Snack Attack (photograph, David Miller): This thing was a-ma-zing! I was really glad that I saved room for dessert. Jeff said the Snack Attack has bubble gum mochi with fresh strawberries, vanilla wafers, whipped cream, and Strawberry Feuilletine. For anyone going to Saved by the Max, I highly recommend the Snack Attack and singing along with Zack Attack below (credit goes to Xavier HBK):

In short, any fan of Saved by the Bell would enjoy Saved by the Max. Get to The Max while you can; the pop-up diner leaves Chicago at the end of December. Go Bayside!

Written by health blogger and speaker, Jessica Gimeno. Her website, Fashionably ill, is about surviving pain--mental and physical--with style and humor. You can follow her on Twitter, Facebook, and watch her TEDx Talk, "How to Get Stuff Done When You Are Depressed," here.