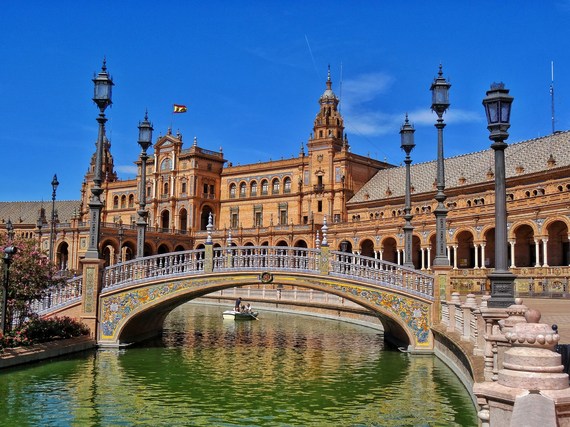 Before I studied abroad, I had little life experience and a strong dependence on my parents. Like many of the underclassmen that I talked with during a recent study away fair conducted by my college, I knew very little about international issues, global perceptions of Americans or the education systems of other countries. Through the mistakes, friendships and observations I made while studying abroad, I learned countless lessons about both the world and myself.

Below is a list of the ten biggest changes to my life since I studied abroad. Considering it for yourself? Maybe this will help you decide.

1. I enjoy spending time with myself.

In college, there are few times in which you are actually alone. In fact, "alone time" is a foreign concept to a college student. However, in a country where you don't know a soul, you quickly learn to do things by yourself in order to optimize your time there. While I was in Spain, I found an appreciation for doing things on my own. I learned a lot about myself, and I often pushed myself outside my comfort zone in order to communicate with people.

2. Yes, it does matter what other people think of you.

When visiting another country, each of us is representing Americans as a whole. Whether or not we realize it, people are watching everything we do and say. All of these words and actions are immediately written off as "American." It was hard to get used to being a part of a minority culture rather than the mainstream, but once I did, I learned to minimize my "Americanisms" in an attempt to give a more positive perception of Americans on the world stage.

3. Getting lost helps you find the greatest adventures.

I've heard it said, "if you want to learn about yourself, get lost in an unfamiliar city." My friends and I took this advice to heart during a weekend trip to Madrid. After taking an overnight bus we spent approximately four hours lost and miserably wandering the unfamiliar streets in pursuit of our hostel. Ultimately, we realized the advantage of being lost in such a beautiful city. By simply opening our eyes, we happened upon a beautiful old bookstore, Madrid's equivalent of Broadway, and people with incredible stories (oh, and eventually our hostel).

We are the product of our experiences. I have never known this to be more true than when I first found myself sitting in the shade of Seville's Cathedral people-watching with my friends, and I could not find an explanation for a single thing I was seeing people do. Through this and other experiences, I learned understanding when I was abroad, especially with regard to the idea that my way of life is no more or less correct than anyone else's.

5. Increased fluency in Spanish (yes, mom, I did go to every class).

Between being in class for six hours each weekday, living in a homestay with a Spanish family and befriending (or attempting to befriend) the locals, I got to use A LOT of Spanish during my time abroad. My friends that had little to no familiarity with the language of their host country seemed to make even more notable improvement in language mastery. As a language student, I found this to be particularly rewarding.

I always gave my parents credit for my accomplishments, because they also received criticism when I made mistakes. However, while I was abroad, I found myself out from under their watchful eye for the first time. My daily interactions were exclusively with people who had never met my parents, so my actions reflected on me alone. I have integrated this autonomy into my life after returning from study abroad as well, because I have come to enjoy receiving credit for my successes (and even acknowledging my shortcomings).

Part of college is finding yourself. Throughout my childhood, I wanted nothing more than to be a teacher. I loved having an answer to the question, "What do you want to be when you grow up?" During my time abroad, however, I realized that I had limited myself by never considering other options. So I sought other opportunities, and through self-examination, many new opportunities became evident. This search led me to find satisfaction in a life that was different than what I had planned.

Every day since I've returned from my time abroad, I have thought about my semester in Seville. When the time to come home arrived, I had made friendships, created a new routine and found habits that would be quite unnatural for my American self. I left behind a family, as well as four months of memories that I will always treasure. I created a new life there; for this reason, I still feel homesickness for my Spanish life on a relatively regular basis.

9. I am capable of making and coping with changes in my own life.

This one also speaks to the independence that I found while I lived in Europe. Whether it was my personal life, my future or even my education, I had always taken a passive approach in changing what I didn't like. Being surrounded by the unfamiliar for so long forced me to make drastic changes in order to increase my own happiness, whether or not I was prepared to. I was then left to adjust to my new life.

10. There are some things that will forever be out of my control; I must let them go.

Sometimes things happen at the wrong time, or with the wrong people. Sometimes people just aren't going to like you, no matter how badly you want them to. Sometimes life will throw you a curveball, and you will be expected to embrace a seemingly catastrophic change. Rather than digging my heels in and trying to control something over which I have no authority, I have learned to relax my grip. If it's meant to happen, it will. And if not, there is something much better waiting around the corner.