A man on a bus passes a billboard for the Holiday Edition gift bottle of Chivas Regal. It's the most beautiful bottle of booze he's ever seen...and this guy knows his booze. He jumps off the bus and runs to a liquor store, only to discover that the Chivas is way out of his price range.

Undeterred, our hero spends the next 90 minutes chasing the bottle of scotch, using charm, trickery, and hard work. At one point, he comes so close that he can practically taste it--but fate intervenes and thwarts his mission.

Finally, he wins his prize. In the closing scene we see him clutching his Chivas and drinking himself into happy oblivion as the credits roll. 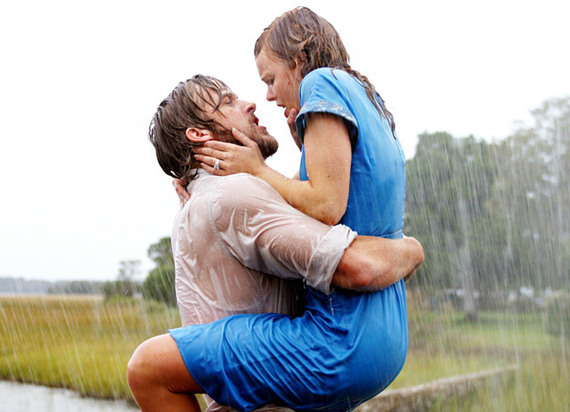 Of course, this film would never get greenlit in Hollywood. If it did somehow get made--in Sweden, maybe--critics would slam it for "glamorizing" alcoholism.

But what if, instead of a bottle of booze, the protagonist was chasing a beautiful woman? This would fly in Hollywood. It would, in fact, describe most romantic comedies ever made.

For sex and love addicts, a sappy, happy ending can be anything but joyful. It can trigger an obsession, reinforce bad belief systems, or send us spiraling into withdrawal.

But here's the thing: For some people, the feeling of falling in love is every bit as addictive as the high from alcohol or cocaine. It's called love addiction. For people like that--people like me, if I'm not on top of my game--the obsessive desire for a love object can be as all-consuming and self-destructive as an alcoholic's need for a drink.

Don't get me wrong; I'm not blaming love addiction on romantic movies. But the messages in those movies--plus books, films and plays dating back centuries (Romeo and Juliet, anyone?)--often reinforce toxic notions of love. Love is all you need, love makes the world go 'round, without your love I am nothing, etc.

For sex and love addicts, a sappy, happy ending can be anything but joyful. It can trigger an obsession, reinforce bad belief systems, or send us spiraling into withdrawal.

Here are 10 "favorite" love stories I've encountered over the years. It's taken me more years to undo some of the damage. Caution: Spoilers ahead.

In Sex and Love Addicts Anonymous (SLAA), there are 12 "characteristics" to help identify sex and love addiction, and the very first is: We become emotionally attached to people without knowing them. In this classic film, a rebellious heiress and an out-of-work newspaperman fall for each other while she's running away to elope with another man. "I don't know very much about him, except that I love him," says the rich girl, played by Claudette Colbert, of the penniless reporter played by Clark Gable.

No wonder I always adored this film. I was forever falling for my own imagined version of a person. In reality, relationships tend to work better when you're actually acquainted with each other.

SLAA Characteristic 12 is: We assign magical qualities to others ... then blame them for not fulfilling our fantasies and expectations. A rich boy and a poor girl fall in love as Harvard undergrads. He defies his family to marry her, but their perfect life is cut short by her fatal illness. "Love means never having to say you're sorry," the leading lady (Ali McGraw) tells her paramour, played by Ryan O'Neal.

The lesson seems to be this: If you truly love someone, you will never hurt or disappoint them--therefore, you will have nothing to apologize for. This is a terrible lesson for a love addict. We already expect our lovers to read our minds and then resent them when they can't.

Characteristic 8: We become...distracted by romantic or sexual obsessions or fantasies. In this widely beloved flick, a wealthy businessman (Richard Gere) hires a prostitute (Julia Roberts) to pose as his girlfriend at a social event, then falls in love with her.

True story: In the original script, Roberts' character was tossed back onto the street when her hooker duties were over. And the suggested actor for Richard Gere's part was originally someone more like Danny DeVito. Let's be honest; this sounds a lot more like real life.

"I want the fairy tale," says the prostitute, and it is the fairy tale that drives this movie's mass appeal. In love addiction circles, we call them "fantasies."

Characteristic 4: We confuse love with physical and sexual attraction--a common problem for all kinds of people, but especially sex and love addicts. This popular '90s flick about a recent college grad who has to decide between her erratic, creative housemate and an ardent, stable television executive, ends happily, against all odds.

But in the real world, if a potential romantic partner tells you, "I may do mean things, and I may hurt you, and I may run away without your permission, and you may hate me forever" well, you should probably run. Even if he looks like Ethan Hawke, or she looks like Winona Ryder.

"You complete me," volatile football player (Tom Cruise) tells vulnerable single mom (Renee Zellweger) in this love addict landmine. It's a ridiculous notion to think of single individuals as half-people, flopping around the planet waiting for some puzzle piece to make us whole. This thought process is a recipe for disappointment and madness. The quest for another human to "complete us" is a big part of love addiction.

Characteristic 5: We feel empty and incomplete when we are alone...

This adventure-themed rom com is about a Manhattan fashion journalist (played by Anne Heche) stranded on a South Pacific island with a crusty bush pilot, played by Harrison Ford. Will they manage to overcome their differences to find love? Spoiler alert: yes.

Sure, he saved her life, and we do "confuse love with... the need to rescue or be rescued" (also in Characteristic 4.) But how will the 30-something magazine editor really feel in 10 years, when stuck with a 66-year-old boyfriend and no running water? Some good old AA wisdom would have served her well: "Think it through!"

We stay in and return to painful, destructive relationships, is SLAA's Characteristic 2. The lovesick protagonists in this flick, Joel and Clementine, attempt to heal their broken hearts by literally forgetting about one another. Despite the fact that they are ill-matched, have hurt and disappointed one another over and over again and have broken up for good... as soon as they forget the bad stuff, they fall in love all over again.

There's a phenomenon in recovery known as "euphoric recall." Addicts and alcoholics have a way of remembering the party and forgetting the hangover. This is the same thing, with genitals.

Love addicts want to have our cake and eat it, too--preferably, with no calories. This film is a classic example of the idealized notion that we can have it all--the intensity of a passionate, obsessive love affair, and the duration of a many-decades-long marriage, all with the same person.

In this iconic romcom, a rich girl (Rachel McAdams) and a poor boy (Ryan Gosling) fall in love in 1940's South Carolina. Their dramatic young love affair transforms (spoiler alert--I did warn you...) into 60 years of devoted marriage. But the reality is that this kind of breathless, stalker-y, adolescent relationship rarely lasts. Ryan Gosling is no more likely to grow up to be James Garner than a red Ferrari is to turn into a reliable pick-up truck.

In this movie, a jilted protagonist (Steve Carell) asks a notorious womanizer to teach him how to pick up women, not realizing the player (Ryan Gosling again) has picked up Carell's own daughter (Emma Stone). This is no The Notebook--because this Ryan Gosling character is not the 'till-death-do-us-part type. Anything but! Yet, after one deep-and-meaningful night with Emma Stone, he instantly turns into a devoted, loyal lover. In AA terms, that's called denial: "Yes, but... this time, it will be different!"

The idea of transforming a player into a faithful partner is crack for love addicts. Characteristic 9: We... attach ourselves to people who are emotionally unavailable.

There's a piece of probably every one of the 12 Characteristics in this tale of an ex-mental patient who falls for a beautiful but disturbed young widow. In reality, pairing a depressive sex addict (Jennifer Lawrence) with a bipolar love addict (Bradley Cooper) would not solve their problems. A therapist would tell you it's more likely to make them worse. But this is the movies, so they fall in love and it fixes them both--at least while the credits roll. Sex and love addicts often fall for each other; that doesn't mean it's a good idea.

Ethlie Ann Vare is the author of Love Addict: Sex, Romance and other Dangerous Drugs (HCI Books 2011) and the blog www.AffectionDeficitDisorder.com.