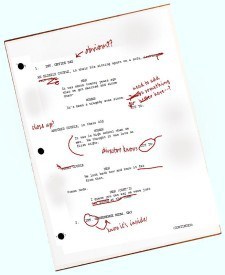 When I am not blogging about the twisted workings of my own mind, I have, over the years, provided my services as a story analyst to various production entities. This article is a reflection on one aspect of being a Hollywood script reader.

Screenwriters aren't real writers anyway. Novelists and playwrights, they're the real writers. Screenwriters are just jotting down a few things for a director to mess up later. Since they are not really writers, we shouldn't expect too much of them in the way of intelligence or erudition.

If you are a screenwriter, I hope the above paragraph offended you on some level. It's bad enough the screenwriter is barely ever acknowledged by the larger society as the foundational--and indispensible--source of great movies, but to be thought of as someone who isn't even really a writer, that's got to hurt.

The problem is, too many screenwriters allow this kind of reputation to follow them around by not investing in their work the kind of intelligence and erudition that should be the mark all professional writing.

Unless you are well ensconced in an existing production entity and your ideas are developed in house--circulated only among the various people who will eventually be making the film you have been paid to write--the first person that will read your script will most likely be, well, a reader. Also called story analysts, these are the folks who tend to get barely perceptible tweaks in their nervous systems when a glaring typo hits them during an otherwise perfectly good read. If there are enough of these glaring typos, it won't be long before the script reader begins to think the person who submitted such a woefully inadequate effort has no business being a writer (let alone a screenwriter! - insert smiley face emoticon here).

One, two, even three or four oversights of presentation in a screenplay are never deal breakers (okay, so spell check didn't catch that you meant to write "brakes" instead of "breaks" in that car chase scene; and in the fever pitch of your keyboarding genius you typed "wandering" aloud when you meant "wondering" aloud--a very common and rather irritating gaffe, btw.). This is especially true if the script is, in fact, holding its own. But some of the more egregious slip-ups can leap off the page in a way you wish your story was leaping, and that lousy first impression could potentially sink the work's effectiveness.

Here are the ten most common - and needless -- errors that repeatedly occur in screenplay after screenplay:

Breath - As in, "Our hero is so tense, he can hardly breath." Please remember to take a breath and add the 'e.'

Holmes - It might be worthwhile to point out that the practice of calling someone your homeboy is the root of the expression "homes." Therefore, when you are writing your slang dialogue, you should not make a reader wonder why your streetwise tough guy is referring to his ne'er-do-well accomplice as the great detective Sherlock Holmes, even if it is an oblique reference to either Robert Downey, Jr. or Benedict Cumberbatch.

Isle - Believe it or not, this one recurs frequently in scenes set in supermarkets. You know, where there are "aisles" in which you can find various merchandise. Let us not confuse our retail store location with the place where Gilligan and his pals got stranded.

It's and Its, Your and You're, There, Their and They're - The misuse of these terms is common to all forms of writing, but since screenplays are usually littered with reasons to use them, it would be prudent to start remembering when to properly call upon each one, so your screenplay won't be littered with twitch-inducing mistakes. And if you don't know which one of these is which, get Googling. (And while you're at it, do a document search for "could of"--as in I could of just died--and change them all to "could have," won't you?)

Lightening - That would be someone trying to indicate the electrical storm phenomenon that occurs in the sky. Unfortunately, when spelled with an 'e' in it, it sounds more like what you would ask the Director of Photography to do once the shooting begins.

Peaked - Part of a trio of errors that really tip one's hand as a hack. One's interest is not "peaked," it is "piqued." The sun does not "peak" over the horizon, it "peeks." And a mountain doesn't have a "peek," but rather a "peak." Dope slaps all around.

Peddle - Bicycles appear in a lot of film scripts. And the way one generates forward motion on one of these ecologically sound contraptions is to pedal them. To peddle a bicycle would mean you could start haggling with your potential yard sale buyer at any second. (See also: peddle to the meddle.)

Pouring - Another one that turns up a lot, because people in movies are always laying documents out on tables and going over them for clues. However, what they are doing in that case is "poring" over the evidence, not "pouring" over it, the latter of which could give a smart aleck actor every license to throw any number of liquids on top of the props during shooting.

Suppose - Used as a stand in for "supposed" more times than can be counted. (For example, "I haven't heard from him. He was suppose to call me.") It would behoove you to fully grasp when you are supposed to use this word.

Volkswagon - Despite their recent scandals, it's still Volkswagen, dummkopf. Which raises an entire, huge sub-category of perhaps the most utterly unforgivable typos: names of products and people spelled incorrectly. Especially in scripts that are about a certain industry or period in history, misspelling the name of a well-known business just screams to a reader that you cannot even be bothered to do anything but spell something how you think it should be spelled. Most corporation names begin with an uppercase letter, by the way, no matter what their all-lowercase URL might look like in your browser. Oh, and there is no apostrophe in Starbucks. Bottom line: misspelling proper names and businesses is one of the biggest tip-offs to laziness and uncaring in the overall presentation of the story.

Special Bonus Typo 1: Loose - A sadly common stand-in for "lose." Please take note: do not make the mistake of thinking that, should you make this error, you will have nothing to loose.

Special Bonus Typo 2: On Route - Yes, that may be the way we pronounce it with our standardized way of speaking something other than English, but the term is "en route." Since many screenplays repeatedly involve characters going from one place to another, this one turns up quite frequently, and is just as frequently wrong.

Well, we have come to the end of our list. Here, the author steps back, takes a deep breath and hopes to whatever deity you care to name that he has not included any typos in this copious rant about typos.

If he has, feel free to add it to the list. After all, we real writers have to look out for each other.

More of James Napoli's writings on film can be found here.