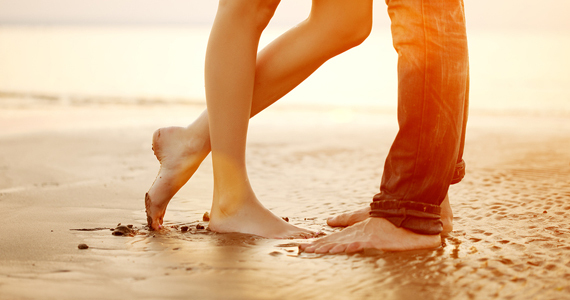 I'm 41 years old, and I've been married to the same beautiful woman for almost two decades. Over the years I've had to work through some myths and misconceptions about sex. Many of these misconceptions started early, before I was married, and they've taken years to straighten out. If I could send ten sex and intimacy tips to myself before I was married, this is exactly what I'd say...

I know you're so pumped about getting married because you found the girl of your dreams and you plan to spend the rest of your lives together and, well, SEX!

However, I'm writing this because you have some preconceived beliefs about sexual intimacy that are totally WRONG. And before you get married, I'd like to clear them up for you, because, you know, we're pals. So let's get started.

10. Sexual intimacy doesn't happen like it does on TV or in the movies.

Much of what you know about sex comes from advertising, TV and the movies. In other words, sex looks like a spontaneous, flawless connection of love-making filled with romance, Marvin Gaye and candles in windowsills. Sexual intimacy does NOT work like that. There is rarely Marvin Gaye. Don't be disappointed; real sexual intimacy is different than the movies, but it's much better in the long run.

9. A note on frequency. Brace yourself.

Right now you're thinking marriage is filled with sex almost every second of the day and thousands of times a week -- because, why wouldn't you!? You should live in this dream world for as long as you can and ride your trusty unicorn into the Skittle-stained sunset where you pet your wild Ewok and cross the Bridge to Terabithia. Stay there. As long as you can. That is all.

Sexual intimacy is something you get better and better at. It takes communication, practice and time. This is the way God intended it. Right now you think your sex IQ is at a genius level, but you couldn't pass the Sex ACT with what you know. (No, there is no Sex ACT; I'm using an illustration -- you really should read more too.)

7. Sex is not just about getting, but giving.

Are you laughing? I'm serious. God made sex in such a way that it requires both of you to give. And it's good to give. Don't be a taker all the time. Sexual intimacy is a great place to model sacrifice and service. If you get that into your head now, the getting will be even better. There's great beauty and mystery in the giving. Be generous.

6. Men and women don't think about sex the same way.

For you, sex is wrapped up in physical attraction and it's very visual and instantaneous. However, you might want to sit down for this one, women think about sex in terms of the relationship, their security and how much they feel loved and pursued. For you, sex is like a light switch without a dimmer: you're totally ready at any moment (unless you're asleep... like dead asleep). For her, sex is like a crockpot that takes a good part of the day to come to a simmer. You will both be frustrated by this. That's OK; it's part of God's wiring to bring you together on a deeper level.

Right now, you're putting a ton of stock in the power, importance and value of sex. Let's be honest, you think about it constantly. You need to know sexual intimacy is fantastic and satisfying and incredible in so many ways, but it's not meant to be an idol. You will need to fight this and work to keep sex in proper perspective: as a gift from God to be enjoyed in marriage.

4. Sex can be fun and funny and playful.

There are many angles of sexual intimacy, and some of them you're totally unaware of right now. You think of sex in one dimension -- serious pleasure. However, sexual intimacy done right is a form of vulnerability and authenticity, and when you totally love someone and have nothing to hide -- and I mean nothing -- you are free to be your truest self.

3. Pursuing her is like a legal sex drug for her soul.

I hinted at this previously, but this is probably the best secret I can give you. Pursue her. Make sure she knows you want her in more ways than just the physical. Pursue her mind. Pursue her heart. Pursue her in every way possible. Remember, she doesn't think about sex like you do --you're all skin and eyeballs, and she's all heart and soul.

2. It's more mysterious than you think.

Again, right now your thoughts about sex are pretty simple. You're stuck in the physical, but God designed sexual intimacy to be way more complex than two bodies finding their way together. That whole one-flesh thing you've read in the Bible -- that stuff is real. It's hard to explain and I don't fully understand it, but something magical happens in the act of sex, something cosmic that links you to her in a way that's soul deep.

1. Sex in marriage is a form of worship.

Most of your thoughts about worship are confined to church and singing right now. So when I say sex is worship, you probably think I'm nuts. But soon you'll get a bigger picture. It's a fun point in our spiritual journey. Along with that is the beautiful command from Scripture to have sex with your wife -- unashamed, unabashed, unadulterated and often. This act is a form of worship, plain and simple, like singing an ancient hymn with your bodies. That sounded a little creepy. Let's just call it worship.

I really hope you'll take these thoughts to heart, because when it comes down to it, sex is more wonderful than you can imagine.