Asshats. We've all been in love with at least one. Haven't we? If you haven't, do me a service and lie.

What defines an Asshat? (I'm going to refer to men, but Asshatism crosses all gender lines). My #AsshatCriteria:

1. He never does what he says he'll do. He doesn't call when he says he will. He doesn't show up when he should. You frequently think he may be dead, then want to kill him when he's not.

2. He is angry and grumpy for no apparent reason. He won't talk to you and you don't know why. There are long awkward silences that make you want to bash him in the face with your running shoe.

4. You frequently try to break up with him, but you just can't quit him.

7. You start wearing crystals to clear your chakras, reading self-help books on co-dependency. You become a regular at the Bodhi Tree on Melrose Avenue where you buy over-priced Buddhas and nausea-inducing incense.

8. You see a shaman, a psychic, a past-lives medium and a hypnotist.

9. You read Men are From Venus, Women are From Mars and try to wait for your man to come out of his cave and snap back like a rubber band. You decide that motherfucker John Gray doesn't know what the hell he's talking about.

10. You are unhappy all of the time. You feel lonely, desperate, grasping and fated to live your life forever dissatisfied or alone.

There's more, but I think these 10 will have to suffice.

Now here's the thing about Asshats. We don't have to judge them or revile them. They are, quite simply, damaged people. We don't know why they're damaged and even if we think we do know why, we must accept that WE ABSOLUTELY CANNOT FIX THEM.

Here are my five tips for avoiding them entirely:

1. Do not, under any circumstances, allow your vagina (or penis) to choose a relationship. Just don't do it!!!

There's a reason some cultures still insist on chaperones and on arranged marriages. Because they don't trust vaginas (if you're male just insert penis every time you see vagina) to make good choices.

My vagina can walk into a room, instinctively find the biggest Asshat there and pounce on him. My vagina has, historically, gotten me tied down for years with men (two of them) prone to all kinds of Asshattery.

By the time I met my husband Henry, who is the antithesis of an Asshat, I didn't trust my vagina anymore at all. True to form, when she met Henry she gave him the cold shoulder (yes, vaginas have shoulders).

She just didn't find him intoxicating because he was reliable, kind, conscientious, a gentleman and he wasn't swarthy.

Fortunately, I ignored her and decided to date Henry anyway. The irony is that in my previous relationships fraught with Asshatalism, the sex got worse and worse, whereas the sex life with my loving husband has gotten better and better.

I had to reprogram my vagina, which was a challenge, but so worth it.

This is the follow-up to #1 because you really need time to get your vagina to simmer down.

How long is long enough?

In my case, I really think I should've waited at least three months before engaging in sexual activity with a prospective beau. I realize that in this day and age -- unless you're supported by your religious community -- that's it's very difficult to wait.

But I have to take a page from the book of my babysitter's 20-year-old daughter, Lilly. When Lilly began dating in earnest as a teenager she informed any interested suitors that she absolutely would not consider having sex for at least six months. And if they weren't okay with that then she'd understand if they walked away.

And many of them did walk away.

But Lilly stood her ground, weeded out the Asshats, and is now in her first (and maybe permanent) relationship with a loving, supportive boyfriend who treats her like a queen.

Which leads me to my next tip:

3. Come to know in your very bones that you are lovable enough, beautiful enough, talented enough, worthy enough to be treated with respect.

I offer you Exhibit A: Halle. Berry.

Halle Berry is ostensibly one of the most beautiful, talented women in the world. Yet again and again she has ended up with cheating Asshats (Fingers crossed that Olivier Martinez isn't another one). And they didn't cheat on Halle Berry because she wasn't enough, they cheated because they were cheaters.

People who lie, cheat and emotionally abuse you aren't doing it because you're not worthy. Chances are they've behaved the same way with partners that came before you and will continue said-behavior with partners who arrive after you've made your escape.

Damaged people do damage. And it's not about you. Unless you let them in.

4. Avoid the "familiar" if you come from a home with damaged people.

From the ages of 2 to 10 my mom was married to my step-Asshat.

His specialty was rampant infidelity, which drove her to the brink of madness. After almost eight years of emotional abuse my mom pulled herself up by the bootstraps and finally walked away for good and into a much healthier more loving marriage a few years later.

But the dye was cast. As a young adult I was drawn to men who were just like my stepdad. Tall, dark, handsome, usually in very macho professions that yielded a coterie of adoring female groupies.

I instinctively responded to these types of men because they felt familiar. They felt like "home."

Unfortunately, my "home" wasn't one I wanted to recreate. And sure enough, infidelity on their part and madness on mine ensued.

Like George Costanza, when it came to dating again, I had to think about what I would normally do, then do the exact opposite to find a healthy relationship.

Which leads me to my last tip...

5. Give the regular guy/gal a chance.

I have a friend who doesn't date. Ever. Being the inveterate match-maker that I am, I'm always trying to set her up. I've gone so far as to snap photographs of perfect strangers and get their information to send to her and she NEVER BITES.

The men are either too short, too round, too white, too black, too hairy, too hairless, too flabby, too muscular, too... you get my point.

Finally I exasperatedly asked her, "So who would be good enough for you to date?"

Without missing a beat she said, "Brad Pitt."

Brad Pitt. I'm going to leave you with that for just a moment. Brad. Pitt. Well, who the hell wouldn't want to date Brad Pitt. Reality check, he falls for women like Angelina Jolie.

We are not Angelina Jolie (although I worry she's too skinny). We have got to start picking people in our ballpark, ladies and gents.

There are myriad lovely people out there who are capable of loving us back to Happiness. And once we are able to let that love in, they are no longer too short, too round, too white, too black, too hairy, too hairless, too flabby, too muscular. They are, quite simply, ours. 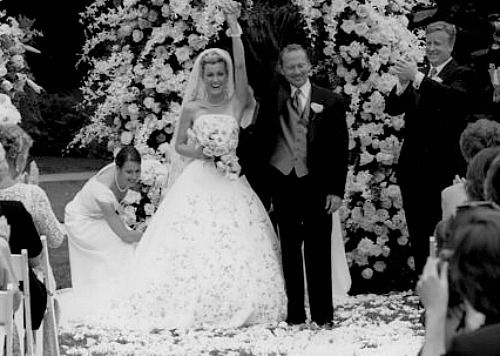 (Considering my history, marrying my best friend was more surprising than if pigs flew out of my butt.)

Let me know if any of this information was useful and be sure to sign up for my free updates here. xo S