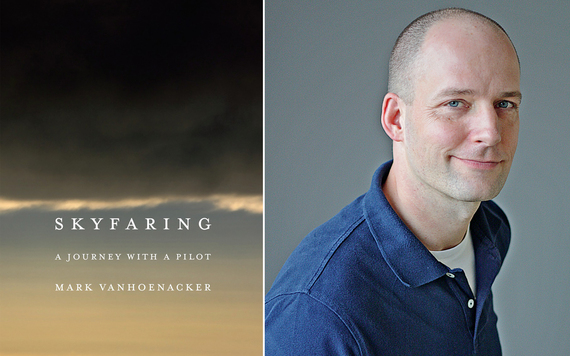 Mark Vanhoenacker has been a pilot with British Airways for the last 12 years--during which he has logged about half a million miles and 800 hours in the air. His new book Skyfaring (Knopf, $25.95), out this week, is a romantic look at what really happens when we are in the sky. He wrote the book--whose chapters have simple titles like "Lift", "Air", "Water", and "Night"--as a way to remind people, and himself, what is so amazing about flying. As he puts it, “The things we do everyday become ordinary by definition. That’s true about flying for passengers, and it’s also true for pilots.” Here, Vanhoenacker sheds some light on life as a pilot.

“One of my favorite things to do as a passenger is put music on and look out at the world. I think airplanes are one of the few places you can zone out. When you fly as a passenger you definitely have this meditative space. I never use Wi-Fi as a passenger.”

“I’ve flown over the United States on the Fourth of July. On the ground, we think of fireworks as something that happens way above us. When you’re in an airplane, you realize they’re actually close to the ground. If you ever see a coin at the bottom of the pool, that’s what a firework looks like to me from the sky.”

“One of the most common is you need to have perfect vision. I’ve had countless people say to me, ‘I wanted to be a pilot but I wear glasses.’ Of course there are standards you have to meet, but you’re allowed to fly with corrective lenses.”

The truth about turbulence:

“We try to remind passengers that while it’s uncomfortable, it’s never dangerous. There are a few causes: by heat rising off the ground as the sun warms the earth and by wind moving around the terrain and nearby hills. The kind of turbulence you experience in the cruise part of flight is often due to jet stream. These powerful winds are helpful because they get us where we’re going a lot faster--but we have to avoid them if we’re going the other direction.”

“He was on a flight from Munich to Heathrow, and we didn’t get advance notice that he was on board. Some people just want to enjoy their privacy, so I didn’t talk to him during the flight. A lot of pilots are amateur astronomers--we see the moon bright enough to read a map by, the Northern lights, and shooting stars. Any pilot would be honored to have a passenger like that. After the flight, I went to say goodbye to all of the customers. I saw him and said goodbye. I don’t think he had a window seat, but that’s one of those things I would have loved to ask him about.”

“I really like flying from London to Cape Town. It leaves in evening and gets dark after take off. Sometimes we see Paris and Barcelona, then Algiers, and all of the Sahara, where you can’t see any lights on the ground. Sometimes we’re out over the open ocean for four or five hours, and we cross the equator. The Skeleton Coast of Namibia is amazing, with the red dunes below you. And when you come into Cape Town, it really does feel like the end of the continent. To really cross from beginning to end is just an extraordinary experience.

Why he loves to fly at night:

“There’s something special about lights below and what we see in the sky above. Cities at night are just amazing. When you fly over the Midwest, you can actually see the lines of the interstates because and follow them to larger towns and cities. If you’re near Chicago, you can’t really see the lake, but you can see the line the water makes against the light. And of course the stars are unbelievable. Vancouver to London and Seattle to London are the best bet to see Northern lights. Window seat on left side.”

Biggest challenge of being a pilot:

“Training and exams never stop. Every six months I have to spend two days in a simulator. We also have an annual written exam and have other training days to work with cabin crew. The rigors of training and the fact that you’re always being examined is what people expect and want--and it’s both a challenge and reward of the job.

On the magic of flying:

There’s this impression that the magic of flying has sort of deflated, and I think there have been efforts in the last few years to reconnect passengers with what they’re actually doing. For a long time there were airports where you got on planes without actually seeing it because there were so many walls. Terminal 5 in Heathrow is a huge light-filled box, designed to reconnect passengers with the experience of flight, and most new airports are doing that now. We see kids and adults looking at planes and taking selfies with plane in the background. And some aircraft like 787 have windows that are larger than normal, you can see out of them from anywhere on the plane. Those windows dim electronically so you can keep looking out at the world while others are trying to sleep. They added that feature because they wanted to make the passenger experience more reflective of the magic of flying.

Favorite cities for a layover:

“I like extreme weather, really hot or really cold, and I loved going to Helsinki and other Scandinavian cities in the winter. They do winter really well, with candles and hot chocolate everywhere. Now, I love going to Delhi because of its new metro system. It’s one of those cities that are hard to get around it by yourself, and the metro makes it really easy. It’s also beautiful and cheap.

More from Travel + Leisure:
Is the Apple Watch Good for Travelers?
June 2015's Best Vacation Deals
The Most Charming Cities in America
5 Beauty Tips Every Traveler Should Know
The Cutest Cosmetic Cases on the Market