I am about to publish a revision of my first book. It's been 13 years since the first edition of 10 Smart Things Gay Men Can Do To Improve Their Lives was published with Alyson Books. That doesn't seem like a long time, but a lot has happened.

In 2003, there were no signs that gay marriage was ever going to be legal. The gay men that appeared on TV and in movies were just beginning to be more than caricatures, villains, or clowns. There were no gay apps or social media. Gay men still mostly chose to segregate themselves in their own bars, baths, community centers, and gayborhoods, and the straight people seemed to prefer it that way. A gay guy thought long and hard before coming out at work, at church, or (especially) at school.

The world has changed in many ways since 2003, and my thoughts and perspectives have evolved since then, too. I've revised 10 Smart Things Gay Men Can Do To Improve Their Lives to better reflect what we're dealing with today. 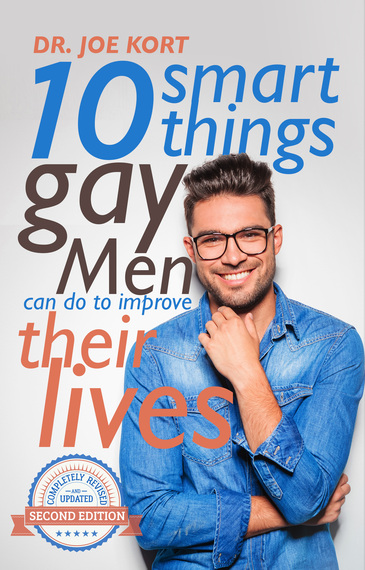 Perhaps the biggest change for me as a therapist and a gay man since 2003 is that I have become more sex positive. Thirteen years ago, I was deeply influenced by the point-of-view of the treatment models of "sexual addiction." Since then, I've learned more about human sexuality. I've become a certified sex therapist and supervisor. And in this time period, I've treated many clients who were troubled by their sexuality, and I've seen time and again that they have not been helped by the sex-negative therapies and perspectives of the sexual-addiction industry. In that community, partnered, vanilla, heteronormative sex is considered the healthy ideal, and that stance is looking more and more naive and less and less helpful in the 21st Century.

So, the biggest change in the 2016 edition is that Chapter 5 no longer follows the precepts of sexual addiction. I no longer believe in that model or that label. It's overused, and it's used against people. When my clients are struggling with sexual issues, I want to look at their individual experiences and explore why they are problematic on a case-by-case basis. Most of the reasons turn out to have nothing to do with compulsivity or loss of control, even though it's often experienced that way. Most people with sexual problems can recover simply by having effective sex education. Not just basic sex education but education on the variations of sex and sexuality.

Today, we know so much more about sexual fluidity, kinks, fetishes, non-monogamy and all the rest. Sex is messy, smelly, gross at times, exhilarating, highly energizing and (often) fun. Sex cannot be perfectly integrated with our laws, principles, and ideals. "Most of us will get turned on at night by the very same things that we will demonstrate against during the day," as my colleague, Esther Perel, says so well.

In fact, when I wrote this book in 2003, my perspective was heteronormative. I really did believe that the ideal gay relationship had to be monogamous, even though I understood (and research continues to show) that about 50 percent of stable gay relationships are open. Yet, I'm not the only gay man with heteronormative habits of mind. It's really puzzling to see gay men judge other gay men for their open relationships. Obviously, some of that comes from wanting straight people to accept us. But the truth is we're lucky we don't have to be just like them. We get to be free, and we're not free if we feel we have to model ourselves on straight people.

Some people do need help with their "out-of-control sexual behaviors." (I prefer this less pejorative phrase to "sexual addiction.") However, a person can be very interested in sex and porn without being addicted. I used to imagine that I saw a great deal of sex addiction in the gay community. That was because I was seeing through my sex-addiction-trained sex-negative lenses. Now, I see that gay men have a lot of fun with sex and a lot more permission and a lot more opportunity, and I see all that through a much more positive set of lenses. I see it as healthier than I did back in 2003. My change in perspective is reflected in this revision of 10 Smart Things Gay Men Can Do To Improve Their Lives.

One factor that has encouraged more playful and creative sexual expression in the gay community is that AIDS is less the inexorable death sentence it once was. That is partly unfortunate. There's less AIDS awareness now than there used to be, and so we're seeing an increase of men in their 20s contracting HIV. I've added a section to Chapter 5 reminding of the continuing importance of safe sex, despite progress in AIDS prevention and treatment.

Be the first to know when 10 Smart Things Gay Men Can Do To Improve
Their Lives Revised and Update" 2016 is released. Click here and sign up.