Just like football or soccer you hone your conversational muscles. You train for difficult topics. You re-play miscommunications in your head.

And just like elite athletes, you need a conversational game plan.

The art of sparkling conversation is one of our most requested topics at the Science of People. So a few months ago, I decided to do a bit of research on the topic to write this post for you. One thing I did was begin to ask people when they have had bad conversations in addition to good ones. And I noticed a pattern -- most of the bad conversations had a very specific sequence of events leading up to the actual awkward moment. Here's what we heard over and over again:

I want to stop this pattern! How can you make dazzling conversation with anyone you meet? How can you get business and connections and dates out of your meetings? I want to show you that there is both an art and a science to effective communication.

I have broken down the structure of a conversation into 10 steps that will take your average interactions and make them awesome ones.

The Step-By-Step Guide to Awesome Conversations: 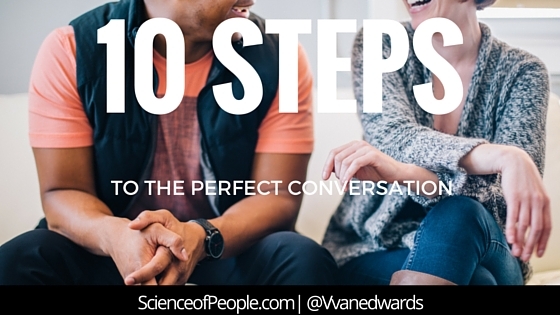 One of the biggest conversational mistakes is going into your events, dates, meetings and parties directionless. You would never start driving to a new destination without the address. And you certainly would try to look at a map or get directions if you were going to a new place. The same applies for conversations.

A conversation without a game plan is like driving without a map.

Like any good athlete, conversationalists practice, prepare and execute with the intention to win. While you don't want to 'win' a conversation, you might want to win business, win friends or win new ideas. Before any social interaction, set your intention, know your crowd and do your research. This doesn't have to be anything major, but rather simple one sentence answers to the following: Who, What, When, Why.

Even a simple, "I want to find some new clients" or "I want to have a great time" sets up an intention that means you are more likely to have purpose while speaking to people. Purpose provides confidence, boosts influence and is contagious. As humans, we like someone with direction.

We make our first impression in the first 7 seconds of seeing someone -- this happens sometimes before you even start talking. Most people think that we don't make our first impression until we start talking, but this is not the case. Be sure that before you even start the conversation, you are approaching it with open and confident body language. When we first see someone, our brain is trying to gauge if they are friend or foe. You want to signal 'friend' signals right off the bat. Here's how to have open body language right when you walk in the door:

What is the best conversation opener you have ever heard?

What is your go-to conversation starter?

The hardest part of a conversation is the opener. We tend to agonize over who and how to approach someone for a conversation. But don't worry! A few conversation starters are the easiest way to get the chit chat ball rolling.

Once you have the conversation started you want to keep it going. The most charismatic people look for conversation sparks. They bring up topics, look for ideas and ask questions that spark energy or get the person excited. If you orient your questions and intention around eliciting sparks, it will be much easier to keep the conversation going and avoid awkward lulls or directionless chit chat. I have a list of my favorite 33 Conversation Starters but here are three you can try right now:

I had a great example of the eyebrow raise happen to me the other day. I was sharing a story at a networking event with a marketing executive. I was telling him about a great commercial I saw while watching a Portland Timbers game (the Portland soccer team). He was nodding along while I talked about the commercial, but when I mentioned it was during a Timbers game, his eyebrows did a nice jump. After I finished the story, I asked him if he was a soccer fan. Sure enough, he said his son was trying out to go pro -- and this started a great conversation about soccer, sports and kids. We traded cards and I hope to do a workshop for his marketing team.

I listen to a A LOT of podcasts. One of my favorites is the Tim Ferriss podcast. He interviews the most fascinating people and asks really interesting deep diving questions. On one of his podcasts with Jimmy Chin, a professional climber, Jimmy was talking about advice he would give to first time climbers. This was interesting, but then he started telling a story to back up his advice about one of his first climbs. As soon as he started the story I was sucked into it. I leaned in, gasped at the surprises and held my breath for the ending. Not only did the story mentally capture me, I also felt a physiological response while he told it. I will remember his advice far more from the story than from his tips even though the story was not as direct.

Warning: Stories are great, but don't be a conversational narcissist -- make sure you do equal talking and listening by asking for their stories as well.

No matter how great your body language is or how many funny stories you tell, if you commit a conversational sin you will turn people off. The biggest deal breaker is 'Conversational Mooching.' You know when you ask someone a question and they answer, but don't ask you back? Like you ask them where they are from and they say "New York"... and then silence. We expect reciprocity in conversations. When we share something, we want someone else to share something. When we ask a question we want them to answer and ask us back. It doesn't have to be tit for tat, but we are coded to look for and be treated with equality. Be sure you are not a moocher and give back as much as you get.

Some of the most talented conversationalists do something called 'Bookmarking' during conversations. This is an advanced technique that I love, but it does take some practice. The bookmarking technique is when you add markers or emphasis to a certain part of the conversation that can create a deeper connection. Bookmarks are verbal markers you say to make it easier to follow-up or have something to talk about in the future. Here are the different types:

You've started a conversation, sparked stories and gotten to know each other -- now you have to end it. Sometimes the art of the last impression is just as hard as nailing the first impression. The art of ending a conversation is easy. I have an entire post on the art of a graceful exit, but I encourage you to use bookmarks to end well.

I know after an event or date you can be tired and all you want to do is flip on some Netflix and call it a night. But, take a few minutes to do a post-mortem. This can be in your head as you drive home, talking with a spouse or roommate or writing in a journal. Answer the following three questions:

The art of conversation is a skill -- you have to keep learning and honing your ability. Your post-mortems can help you identify patterns and remember to follow up on bookmarks, LinkedIn connections and promises.