Here's a question for you Angelenos: What has a 2000 person workforce, puts on more shows than any other theatre festival in the country, runs for over three weeks in June in dozens of theaters, and is probably Hollywood's longest party of the year? The answer of course is the Hollywood Fringe Festival, which in its fifth year has grown larger than ever, and is my binge of choice for the month of June. I average three plays or musicals a day (which can run as short as 30 minutes and cost as little as $10 each). The shows run the gamut of gamuts and are true labors of love created on a shoestring and represent the next generation of L.A. creatives. 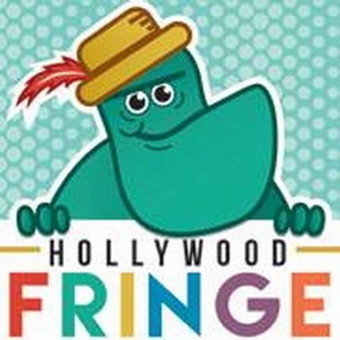 With a massive amount of homespun shows (roughly 300 total), there are, admittedly, a few clunkers in the bunch, but very few. Frankly I found it a challenge squeezing all the great stuff that rocked my world this past month into one article, so in no order, here are ten things I truly loved...

1. Tom & Barry 2 Nights Only Punk rock's greatest would-be Siamese twin brother act, Tom & Barry aka The Bang Bang (think Sex Pistols meets The Cramps) blew the roof off Fringe with their tragic, angsty musical drama, backed by a great live band. Based on the cult film, Brothers Of The Head, this furious and touching fable was adapted for the stage by actor/producer Matt Herrmann (who rocked Fringe 2014 in the award winning musical Bronies). Connected by a shared liver, Tom & Barry's sibling rivalry made the Oasis brothers' in-fighting seem tame. 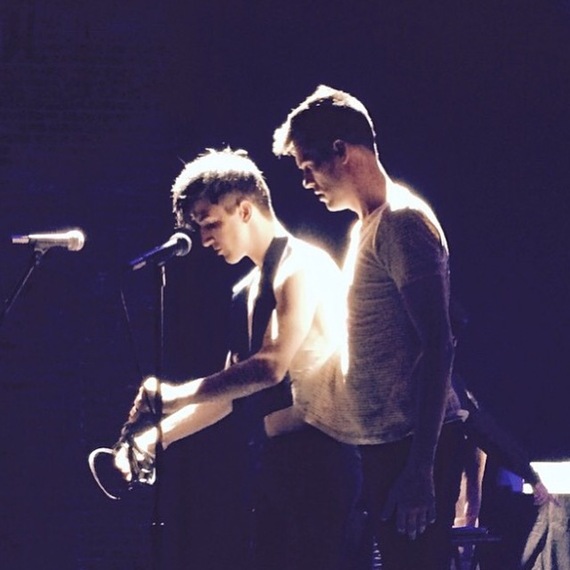 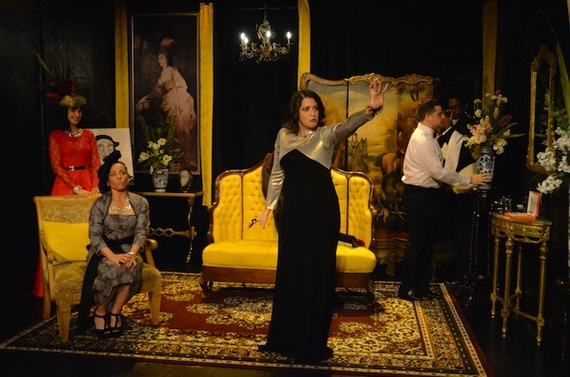 2b. While Choate took no prisoners as Tallulah, the best male comedy performance at Fringe belonged to Damien Luvara who completely transformed into Tony Danza, circa mid 80s. Yes, Tony Danza of Taxi and Who's The Boss fame had his own tribute at Fringe. Luvara not only nailed every detail of Danza's voice, laugh and body movements in the absurd comedy Boss: The Untold Tony Danza Story, he also gets big bonus points for writing and creating the show. 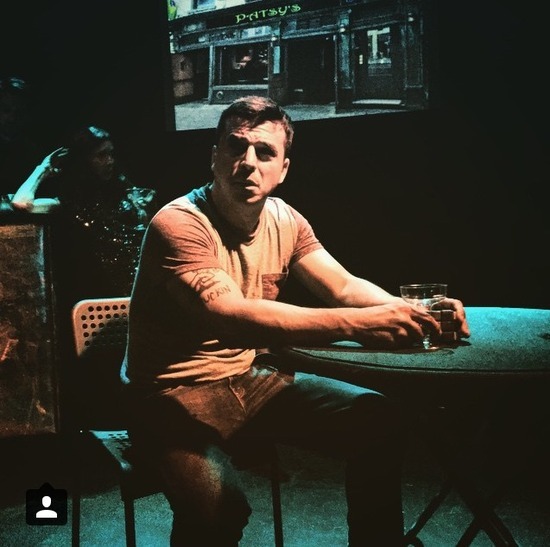 3. Smile, Baby The show that had me laughing more than any other was Savannah Dooley's Smile, Baby - but it's much more than a comedy - it's a dozen, smart, poignant vignettes exploring the emotions women (from tweens to seniors) experience when harassed by catcalling men. Dooley, who won me over with her writing on ABC Family's teen drama, Huge, makes her playwriting debut here, and it's a memorable one. Touching, slightly dangerous, and very hilarious, Smile, Baby and its strong female ensemble will have an encore performance at some point in the next week. 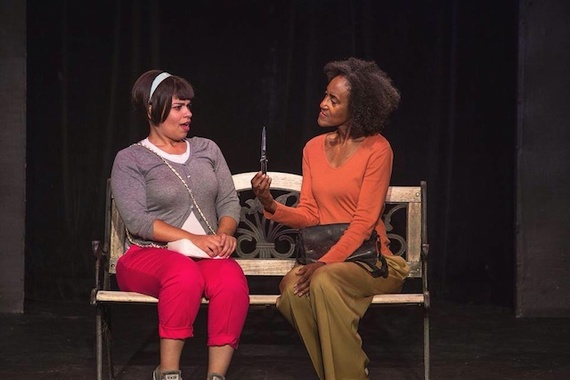 4. My Gay Husband I happened upon the adorable 1950s-style sit com, My Gay Husband, the same day that the Supreme Court declared gay marriage as legal. In My Gay Husband, Ozzie and Harriet-esque Beau and Dottie (Matt Austin and Fiona Gubelmann in performances that make me smile just thinking about it) work to keep Beau's homosexuality a guarded secret from the nosy neighbors. And in true retro-TV style (with writer/producer Kara Lee Burk's clever touch) it's all handled refreshingly sweet, sans any millennial cynicism, complete with TV Applause prompters, and period Mr. Clean commercials. I've been happily informed that Fringe's most delightful comedy will recur again in staged episodes. Find news on My Gay Husband on Facebook. 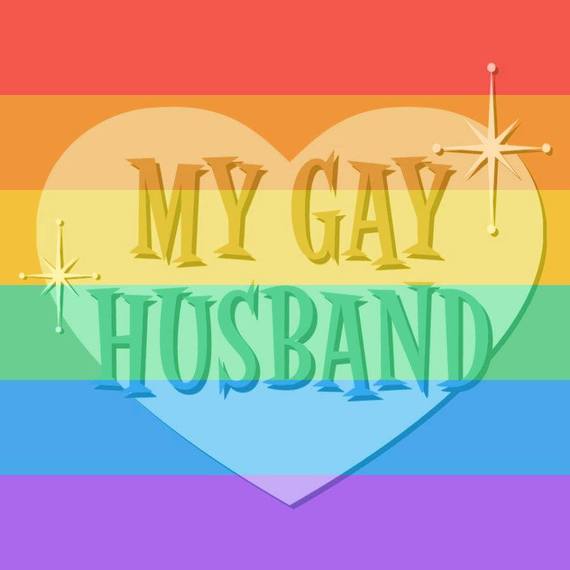 5. Bright Swords All I can say is WOW when thinking about Ryan Vincent Anderson in the tour de force, one man historical play, Bright Swords. A Geffen or Mark Taper worthy-drama, Bright Swords tells the epic story of Ira Aldridge, an African American actor who fled New York in 1825 to become a star on the European stage in London and helped changed the tide of slavery in the British Empire. Written by Ric Creese and directed by Jeff Wienckowski, this was Anderson's Fringe debut - and oh what a debut it was. A solid hour of weaving through decades of Aldrich's life in song and story without breaking a sweat or missing a beat. The most affecting drama at Fringe. 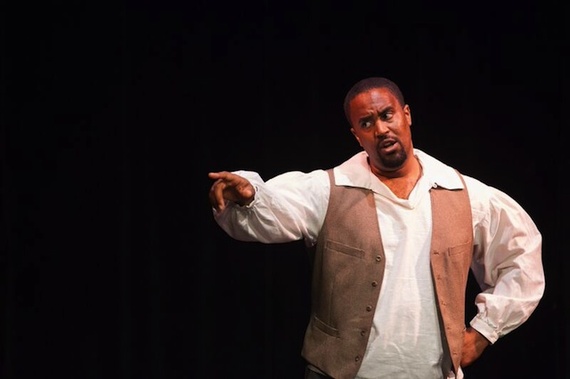 6. Lady Into Fox, Why Water Falls, and Pocket Universe A banner year for dramas at Fringe, I wish for wider audiences to discover the thrills of Lady Into Fox (about a wife who mysteriously transforms into a fox and the loving husband left behind), or Leigh Curran's stirring one woman dramedy about motherhood and fiction writing, Why Water Falls. Perhaps the most affecting love story at Fringe was the heartbreaking Pocket Universe, a haunting hybrid of Rabbit Hole, and The Twilight Zone. The audience around me weeped and gasped through the chilling twists (beautifully performed by Rick Marcus and Nan McNamara). Kudos to playwright Thomas Brandon and Director Rhonda Kohl. 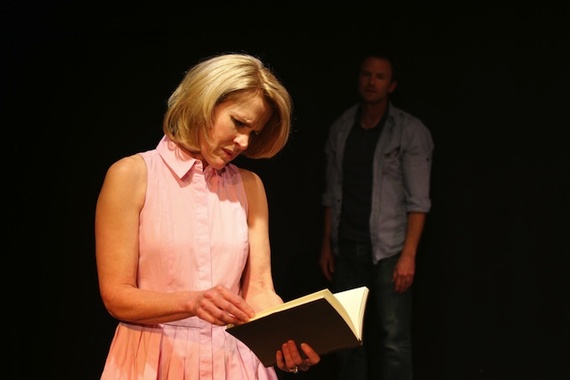 7. The Hamlet-Mobile And then there's the Hamlet-Mobile. To be seen to be believed, the Hamlet-Mobile in its previous life was a beat up utility truck, but during Fringe it was rebirthed into a roving caravan of Shakespearean glory. The van traveled the grungy blocks of the Fringe Fest neighborhood magnificently performing scenes (for free) from Hamlet on sidewalks. Or (if you were lucky) you could be part of an audience of TWO INSIDE the truck while members of the Hamlet-Mobile acted out select Hamlet scenes (the funeral scene, the orgy scene, etc) for you very up close and personal - blood, swords, and all. I am not kidding. The Hamlet-Mobile ensemble took what we thought of as traditional theatre venues and tore it completely apart.

Photo courtesy of the Hamlet-Mobile 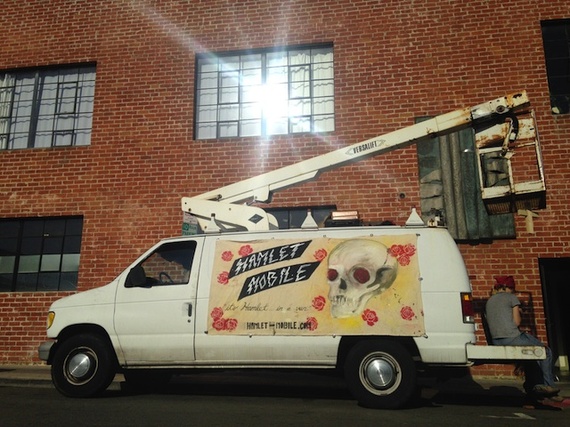 8. This Is We A minimal soulful gem, This Is We, was monumental in scope and story. It followed the birth, blizkrieg upbringing, triumphant success and lonely death of Michael Carter Bronson, a fictional candidate for U.S. president who could also improv rap ala Eminem in 8 Mile. Directed by Ty Leisher, and starring three talented young actors (Derrick VanDerMillen, Kjai Block and the show's writer Mark Smolyar) who cleverly switched roles depending on the stage of Bronson's life. 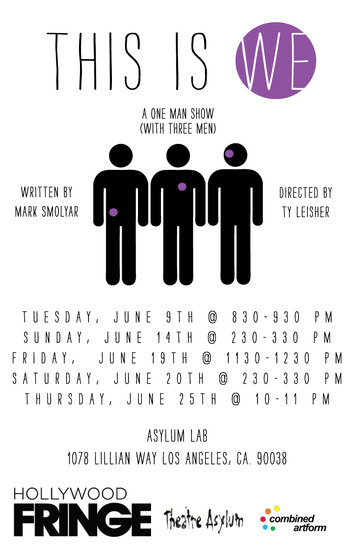 9. Turn The Beat Around Anyone who has ever loved drums (and who doesn't?) would find much to cherish in the many lively and layered sketches that comprise Turn The Beat Around, playwright Eric Rudnick's ode to his favorite instrument. We meet sex-obsessed heavy metal stars, a college professor and his reluctant drum student, and most amusingly, a futuristic team of scientists trying to decipher what a drum's purpose was for mankind. Michael Weissman of the pop-punk band Reason 837 provided stellar drumming between each fabulous scene - which was worth the price of admission alone. 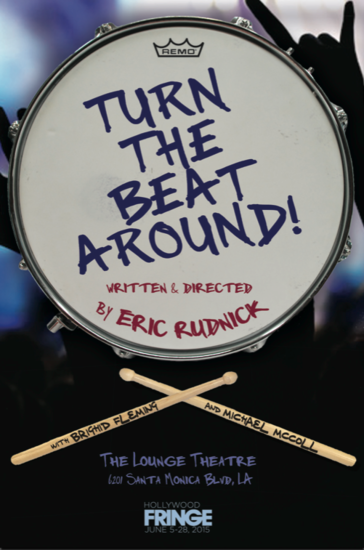 10. Laura House, Susan Tierney, Timeheart, Zip Ties and so much more! I can't believe I am at #10 already - there are too many great shows I don't have room to mention - the otherworldly comedy improv musical, Timeheart, a fan-favorite attested by the long audience lines at midnight down dark Hollywood sidewalks. Zip Ties' testosterone-fueled crime-comedy was a madcap, blood-drenched, paranoid Tarantino-esque wild ride. Susan Tierney's brave and stirring one woman show at the Complex Theatre rocked. And Thank God I caught Laura House's How To Hate Yourself on the last day of Fringe - a riotous laughfest and a complete joy. I learned I don't hate myself and I love Laura House even more!

Fringe 2015 has just ended but check out the site for any updates - http://www.hollywoodfringe.org/ Some shows will have extended runs - many of these shows have their own Facebook pages so check them out if you can. I am already looking forward to Fringe 2016! Hope to see you THERE! 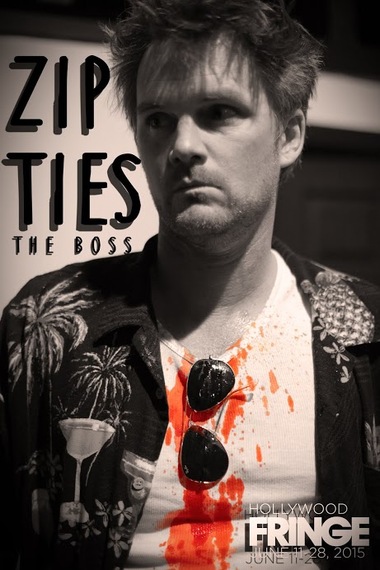