It's becoming more and more common, when we go out en masse.

The comments come rolling in. And yes, there is a noticeable difference between someone who's attempting to be kind, or complimentary, and those who are just being intrusive and snarky. Sooner or later, I'm going to completely snap and get arrested one day in the produce section for assaulting someone by pummeling them with a cantaloupe. Or stuffing a banana in an orifice not normally used to such events. I'm pretty sure that my face starts to look like Bazinga the Wonder Dog (i.e., my beloved pup) when the comments come rolling in: 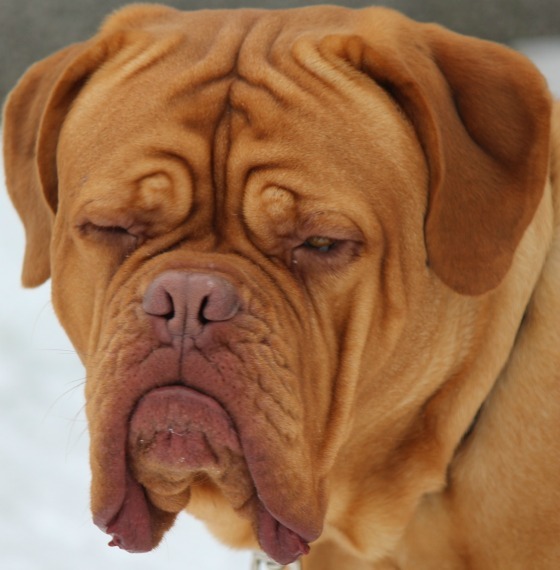 In the interest of staying out of jail, I offer the following:

1. We aren't a sideshow. If we were, I'd have a heck of a lot more cash. So -- staring, pointing, and loudly counting the number of people in my family? Wow, you can count to seven. Aren't you clever. Yes, we have five children at home. How brilliant you are to notice. You didn't even have to take your shoes off to count.

2. "Trying to compete with the Duggars?" Oh. Hilarious. Cause I've never heard that one before. Reality is, I'm plotting to take over the world, and cloning isn't my forte, so I figured I'd better grow my own minions.

3. "You need to learn to say no!" Uh, 'scuse me? First of all, have you seen my husband? Why would I ever want to say no to him? Second, why are you assuming that it's not me jumping his bones, and him trying to fend me off? The idea that I'm suffering from an excess of his lust is bizarre.

5. "Were they all planned?" Wow. Did you plan to be so incredibly, astoundingly rude? Or did it happen by accident? Honestly, this question really baffles me. How my reproductive choices have anything to do with anyone else other than my husband is beyond me. If I say no, then I'm too dumb to use birth control, and if I say yes, I must be nuts.

6. "Are you really religious?" Of course, the only reason anyone would ever choose to have a large family is because they're some sort of religious zealot. I also find that this question tends to be code for, "Are you one of those poor, downtrodden women who believe their only purpose in life is to serve their husband and reproduce?" Here's a thought: folks can have a religious belief without being nuts. And some folks actually want a large family, regardless of being part of any particular religion, or part of none at all. You know, because they like having children, being a parent. I know, I know, weirdos.

8. "How can you afford all of them?" Well, they take turns eating. Not feeding all of them every day helps. Plus, you can save a lot of money by giving them dog crates instead of beds, bedding, and all that other fancy nonsense.

10. "You are done, right?" Why, are you going to supply all my kids with college funds, and need to know how many accounts to set up? No? Then none of your business.

The one that completely enrages me, though, is, "You poor woman!" Excuse me? Yes, my home is chaotic, and cluttered, and loud. I'm not about to lie and say that everything is rainbows and glitter. But I love my life. I love my husband, adore my minions, and wouldn't change a thing.

Large families aren't for everyone, but that doesn't mean they aren't for anyone.