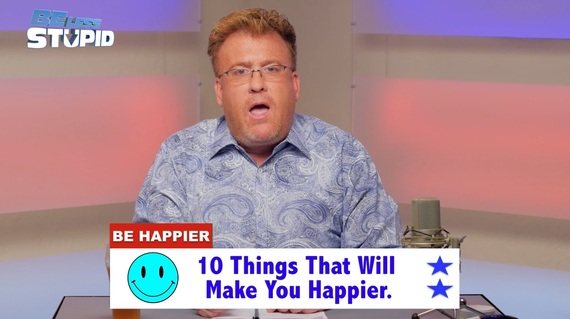 To me, that kind of happiness is fleeting... and finite. Yes, they're good. But, it's not exactly what I'm talking about.

Here's the definition of the kind of happiness I'm talking about:

"Happiness is an overall sense of well-being, joy, or contentment."

OK. So -- I've got 10 ways to improve your overall sense of well being, joy and contentment:

1. Be the captain of your own ship. Do not spend the entirety of your adult life working hard to make someone else's dreams come true. When you work for the "man," he's the organ grinder and you're the monkey. He plays. You dance. He plays faster, you dance faster. He plays slower, but still wants fast dancing, now you're doing the robot or the Tootsie Roll... to one of Mozart's sonatas.

At some point in your life, you've got to invest the same time, energy and creativity in yourself, that you sold to the man for a steady check, two weeks off, nookie in the broom closet with the hot new intern and a frozen turkey around Christmas.

It's not even a fresh turkey. Probably from last year, too. "The man" is a cheap bastard and has no idea his wife tells people he has a small penis.

2. Work with people whose company you enjoy. You spend 1/2 your waking hours at the office so the people there better make you laugh. If Carl in Accounting and Melissa in HR wouldn't help you bury the dead nun in your trunk without asking a bunch of stupid ass questions like: "Why is there a dead nun in your trunk?" You must find someplace else to work.

3. Never let how someone else feels about your work affect how YOU feel about yourself. As a TV creator, I learned this lesson a long time ago. I think of myself as a baker... and I make chocolate cake. Cake so good, you'd steal it from a baby. And your own mother.

And when I go to a TV network to sell a new chocolate cake, and I find out they're only buying Banana Nut Scones that day, I stand up on the table and shout: "Banana Nut Scones? That's what you mother fuckers think viewers want? You pieces of shit?"

Where was I? Oh yeah. Once the EMT's give daddy his special Tic-Tacs, I am calm enough to realize that chocolate cake is still delicious... but that for now, there's gonna be another fucking real housewives show.

4. Have things to look forward to. Back in February 2016, For my 50th birthday on April 10th, I bought tickets to see the first Guns & Roses reunion concert in 25 years, in Las Vegas.

Nearly every day for the three months preceding the show, I had fun thinking about which guy in the reunited band would be the first one to punch Axl. And that made me happy. The thing you look forward to doesn't' have to involve someone being curb stomped... But, if it does: Welcome to Jungle!

5. Do something nice for someone else. And don't expect a thank you. Don't do it to be funny. Don't do it ironically. Do it because you know THEY will like it.

And then, don't hold the nice thing you did over their head. Don't keep reminding them about what you did -- because we both know all you did was re-gift a Fit Bit you won as a door prize at your kid's school's '80s themed fundraising dinner. Which I may have done. Or not.

Want to know the other five (5) things you can do that will make you happier? Just watch the latest episode of Be Less Stupid below.

Jon Hotchkiss is a 14 time Emmy nominee. Subscribe to Be Less Stupid by liking our Facebook page.