I'm not a child development expert, psychologist or pediatrician, but I do have three kids, one of whom becomes an adult this week. So naturally I've read a ton of parenting books over the years, often desperate for insight or answers. But what I've found is that most parenting advice is just trite hooey. I mean, if we could all just magically nod off and "sleep when our baby sleeps" or "find ways to make time for ourselves," then we wouldn't be seeking advice in the first place.

I've made my own discoveries along the way. Here are a few practical parenting tips, stuff the experts won't tell you.

1. You don't need to record every second. Sometimes it's nice to simply enjoy a school performance, soccer game or birthday party without the burden of recording it. Besides, it's better to video everyday moments like your kids playing dress-up, building a fort or having a conversation with their grandparents. Those things will mean a lot more to you in 20 years than some barely watchable clip of your kid standing behind 100 other kids singing "Wacky Weather." Oh, and don't bother getting cutaways and insert shots thinking you're going to edit the video later. Trust me, it ain't gonna happen.

2. Don't volunteer during hectic months. Arrive early at back-to-school night so you can have your choice of party signups. Pick the lesser holiday parties, like Valentine's Day, Columbus Day or even Arbor Day. Don't be stupid and sign up for the "Winter Holiday" party, because when December 18th rolls around and you haven't started your "Winter Holiday" shopping, and your older daughter has a "Winter Holiday" choral performance that night, and your son needs help studying for his semester finals, the last thing you need is to suddenly remember that you signed up to bake 25 cupcakes for the fourth grade "Winter Holiday" Party.

3. Beware the power of the precedent. Any rule, expense or gift that you bestow upon your eldest will have to be duplicated for your younger children. Thinking about footing the bill for Justin's expensive fifth grade class trip to Valley Forge? Just remember that when Justin's younger brother is in fifth grade, he'll want the same. Luckily, sometimes this can work in your favor, like: "Your sister got her pierced ears/cell phone/private jet in the seventh grade, and that's the family rule."

4. They will survive a few hours without you. It's OK to miss an occasional softball game or the school barbecue. Parents who work have to miss things all the time, and their kids turn out fine. In fact, it's good for kids to realize they can function without you, and you'll probably both learn a lot from the time they spend with their friends' families. "Mom, Mrs. O'Brien yells at other drivers from her car just like you do, and also she called Obama a commie!" Really, is that so?

5. Don't waste money on expensive outings they'll never remember. Like that Sesame Street live performance my eldest daughter has no recollection of attending, the one I dragged her to even though she had a raging ear infection because I had already paid for the tickets, damn it. Kids rarely remember anything from their early years, so why waste the money? I'm not saying that you should never go somewhere special like Disneyland, but maybe just go once in the early years and bring a few costume changes. You can do amazing things with Photoshop.

6. Make friends with your kids' friends' parents. This saves the cost of a sitter, and you can socialize while the kids entertain one another. What's also great is that when the kids are teens you'll have a valuable ally: "Did Maddy really sleep at your house last night, and were you really home?"

6a. But don't make them your only friends. It can be awkward when childhood friends mature at different rates and grow apart, yet the parents are still best friends. Sure, you can have your family gatherings, but it's hard to enjoy them when the former BFFs are now busily ignoring each other -- one playing Polly Pockets while the other texts her friends about a rave party later that night.

7. Don't make promises. It's much safer to wait until you're 100 percent sure you can deliver before you announce you're going to do something fun. Kids don't handle disappointment very well, so even if you have a great reason to cancel -- "I know I said we'd go to the beach this weekend, but there's a hurricane" -- all your child hears is "blah blah blah, we're not going to the beach, blah blah blah."

8. But don't make every wish come true, either. Kids need to experience some amount of disappointment. Let's face it, you'd rather chew on thumbtacks than play Candy Land again, so it's OK to say no. Try this: "Mommy is going to relax for a bit while you play on your own." I know it's hard, but if you always put their needs first, then you're setting them up for a lifetime of disappointment, because the rest of the world will not cater to their every whim. It's good for kids to learn early that there is give and take in any relationship. One day, they will be better friends, boyfriends or spouses because of it.

9. Make a list of the adorable things they say. Keep a notebook or start a file on the computer. Really, do it now! Otherwise, here's what happens: "What was that cute thing Sophie said about hookers? You know, when she was dressing the Barbie and she couldn't get the hook and eye to work on the dress?" See, you can't remember. The way Sophie worded it was flippin' hysterical, but you didn't write it down. Don't you wish you had? Seriously, go start that file. 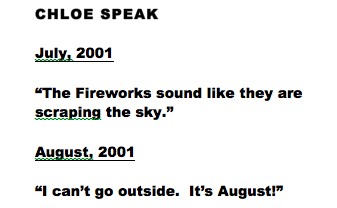 10. Judge not, lest ye be judged. OK, so I stole that from the Bible. Really, it's easy to cast an evaluating eye on other parents. "Well, maybe if they'd disciplined Camille a little more, she wouldn't have gotten caught making out with boys in the sixth grade!" But keep in mind, your day might come. Precious Dylan might do something so mortifying you'll wish you had been a little less judgmental, and hope that other parents have the compassion to say, "I'm sure it's been rough watching Dylan get busted for selling molly, but you have to applaud his entrepreneurial spirit! A businessman in the making, that one is."