Somehow, I am 39. I am 39, even though I still feel like I am maybe 17 and I still look around for the real "grown-ups." As I stare down 40 and gear up for another phase of life, I find myself going back to the things that comforted me when I really was a teenager, and TV and movies were both very big parts of growing up for me in the '80s and early '90s. I cut my teeth on old school Sesame Street and The Electric Company, I grew up with the Cosby Show and Family Ties and later 90210, and the movies I watched over and over starred people like Molly Ringwald, Andrew McCarthy, Ethan Hawke and a whole lot of hairspray. Recently, I realized -- with some amusement -- that a few of the lessons I am trying to teach my kids didn't come from my parents or from school. Instead, they came from scenes in those movies that I can still recite in my mind:

1. Each of us is a brain, an athlete, a basket case, a princess and a criminal. (The Breakfast Club)

Even in sixth grade, my oldest is starting to classify himself and his friends. I did the same thing at his age; I know how it goes in middle and high school. But I try to remind him that everyone he meets has so much going on behind the façade he sees in the hallways at school -- that everyone is fighting a hard battle of some sort, and that no person fits neatly inside a simple label. It's a lesson I learn over and over again, even as an adult. In the end, as Patrick Dempsey's "geek turned chic" says in another favorite, Can't Buy Me Love: "Nerds, jocks. My side, your side... It's hard enough just trying to be yourself."

In high school, my main goal in life was to be average. I didn't want to stand out; I wanted to blend. I think most teenagers do, as standing out is perceived as a bad thing too often at that age. But one thing I definitely want my boys and my daughter to know is that the world is, indeed, full of guys, as Lili Taylor's character states to John Cusack's Lloyd. I am trying to teach my children to strive for more than average, not to be afraid to be exceptional. I want them to do the right and genuine thing, even when it's harder, or even when it leaves them vulnerable. I hope they have standing-in-the-rain-with-boombox moments of their own someday.

3. Your mom and dad were young and clueless and angst-ridden once, too. (Back to the Future)

It was something of a revelation for me when I saw Michael J. Fox's Marty McFly interact with his parents as awkward teenagers in Back to the Future. As Marty observes his dad's teenage cluelessness, he says, "It's a wonder I was even born." Part of my job, I feel, is to allow my children to know that I was in their shoes once, and I still don't know everything... but I know more than they do. For now. OK, maybe not when it comes to new math, but still.

I loved Andrew McCarthy. I loved him even more when Blane really did want Andie back and sought her out at the prom. But I also struggled with the fact that I loved Jon Cryer's Duckie, too -- that his adoration for Andie seemed so simple and easy and loyal in comparison. Is it OK to pick the Blanes of the world over the Duckies? I think sometimes it is, especially when you are young and still learning about yourself and relationships. Inevitably, people are going to like my children that my children might not like back in the the same way, and vice versa. The trick, then, is to teach my children to treat people with respect and care, even if they can't return the same level of feeling. After all, you can't love someone back out of obligation. That's not the way it works.

5. No matter what anybody tells you, words and ideas can change the world. (Dead Poets Society)

We can bemoan the dominance of the Interwebz and social media in modern life all we want. We can justifiably grieve the fall of the local bookstore. The truth is, though, that ideas and words are still -- maybe even more than ever -- powerful tools for change; they just travel (quickly) in a different format. I want my children to remember the power of their words, especially when they give them over to the Internet. Robin Williams's John Keating was not teaching his students about social media, but I am. The message stays the same. Words and ideas can change the world, and I want mine -- and my children's -- to change it for the better.

6. Life moves pretty fast. If you don't stop and look around once in a while, you could miss it. (Ferris Bueller's Day Off)

When I was driving my oldest son to school this morning, he made a remark about how I "always" make a big deal out of his mistakes and bad choices at school and, he feels, not enough of a big deal about the things he does well every day. He might have a point: I have high expectations, and it freaks me out a little when he strays off-path, especially now that he is getting older and the stakes are a little higher. But I do want him to break the rules sometimes. I want him to skip school every once in a blue moon, go on adventures with his friends, dance and sing Beatles songs in a parade. I admit that I can be a little uptight about school, but I want my kids to step outside the box of our days sometimes and, honestly, I need to do that more often too. Anyone know where I can find a 1961 Ferrari 250 GT California Spyder?

7. Say "bless you" when someone sneezes. (Singles) 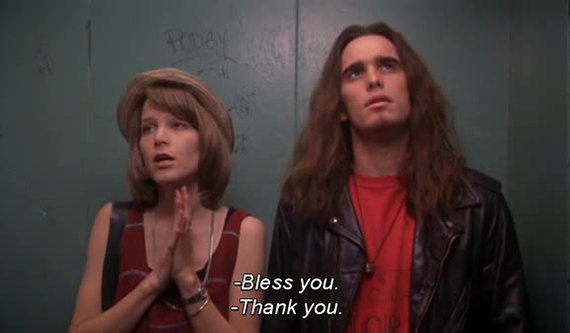 One of my favorite scenes in Cameron Crowe's Singles was when Bridget Fonda's character bemoans lowering her standards for her love interests. She had started out looking for someone with "looks, security, caring, someone who has their own place, someone who says, 'bless you' or 'Gesundheit' when I sneeze, someone who likes the same things as me but not exactly, and someone who loves me." She had since "scaled it down" to "someone who says 'Gesundheit' when I sneeze, although I prefer 'bless you.' It's nicer." It might sound funny, but I have found myself consciously thinking of this line when I sneeze in front of my boys. I always prompt them to say "bless you," because it's just a nice thing to do -- and it is a reminder to be polite and considerate in an age when our noses are too often buried in our smartphone screens.

The Goonies, complete with its Cyndi Lauper anthem, was one of the movies I loved in my own awkward tweenhood. My favorite line is actually at the end, when the kids are reunited with their parents and Data's father tells him, "You are my best invention." We are all Goonies, and we are all valuable and loved. I hope my children know that no matter who they are, no matter how they show their inner Goonie-ness, they are the most important things to me in the world, my "best inventions."

When I first saw E.T. in the movie theater, I cried hard when he had to leave Elliott. That kind of separation, that permanency of loss was not something I was prepared to handle yet. But when the alien pointed his long, spindly finger into Elliott's chest and said, "I'll... be... right... here," I believed him. That concept -- that we can hold each other in our hearts and transcend time and space -- is a big one for even adults to grasp. When illustrated by a rubbery brown alien with an illuminated finger, it seems more plausible somehow. Ironically.

10. Never go in against a Sicilian when death is on the line. (The Princess Bride)

This one speaks for itself, yes?