I believe the time has come to clear up some misconceptions about anti-Semitism.

2) Easy scapegoats: The going narrative is that whenever things get bad, the Jews are the easiest scapegoat, so leaders and policy makers divert the public's anger toward them. This is not the case. People always feel that the Jews are to blame for everything that's wrong; it's just that when life is bearable the anger toward them is muffled by a cloak of culture and political correctness. Therefore, the worse off things become worldwide, the more we can expect global anti-Semitism to increase.

3) Anti-Semitism is a result of ignorance: Many of us think that anti-Semites are ignorant and therefore anti-Semitic. Those who think so believe that if anti-Semites knew how much the Jews have contributed to the world in science, culture, and arts, they would change their minds about us. Indeed, some anti-Semites are ignorant. But the majority of them, especially the fierce and outspoken among them, are well educated people. They know very well what Judaism has done for the world, but they don't care because they feel that compared to the harm that Jews are causing, our contribution is inconsequential. This is how demonic they see us. 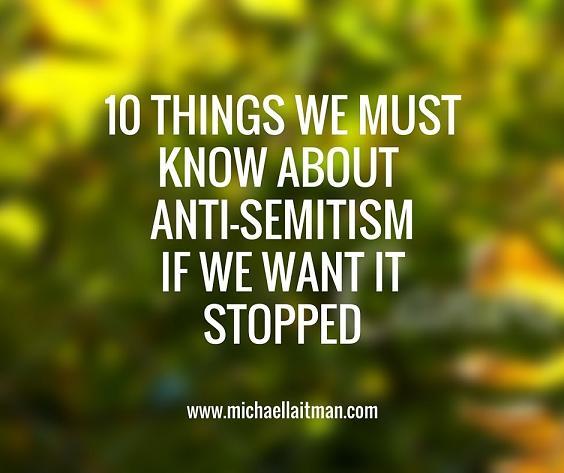 5) Our gift to the world: The one thing we Jews have given and that everyone would love to embrace is the tenet, "love your neighbor as yourself." Yet, the anti-Semites' most passionate argument is that we are warmongers and spread hatred throughout the world. This is the exact opposite of the tenet that everyone agrees is wonderful, and none can implement.

6) Living up to our word: In keeping with item 5, the one thing that the world would like us to give, in addition to the tenet we've already given, is a way to implement it. With the world on the brink of global mayhem, the ability to live by this concept is the one thing that everyone desperately needs, will passionately embrace, and that will dissipate anti-Semitism. However, it is contingent upon our ability to prove that we are true to our word, that we practice what we preach.

7) Who's your foe? According to the previous item, our biggest challenge is not ISIS. It is also not Fatah, or even the overt anti-Semitism of the UN. Our biggest challenge is our own hatred for one another. We cannot offer a viable solution to the clouds of war amassing on the horizon unless we implement the tenet we have "exported" among us first. At the same time, we cannot sit by idly and let these clouds rain down because the world will say that we have brought them down on them.

8) Don't change; connect above the differences: The beauty of the "love your neighbor as yourself" solution is that we need not agree on anything. We can continue to merrily disagree on anything and everything under the sun: how to solve Israel's security problems, why the world hates us, how to reverse the warming climate, the origins of Falafel, or whether Cleveland Cavaliers owes all its success to LeBron James or perhaps some credit should also go to Coach David Blatt. We don't need to worry about our disagreements; we need to worry about our hearts! The more we can unite our hearts atop the disagreements, the better example we will set to the world. A united Jewish people cannot be regarded as a warmonger, since our unity is not aimed against anyone; it is unity for the sake of enjoying its benefits.

9) Setting an example: As said above, anti-Semites blame us for causing all the troubles in the world. But think about this: Have you ever looked at a peaceful looking person and thought, "He's a warmonger?" Accordingly, when we stop quarreling among ourselves the world will regard us as peaceful. We will become an example of implementing the tenet, "love your neighbor as yourself," which everyone so craves. When people see us as an example of mutual care and mutual responsibility, they will no longer hate us.

10) One step at a time: "Love your neighbor as yourself" was a lofty goal even back in the days, so Old Hillel said we can start from "That which you hate, do not do unto others." This starting point will also work for us. Connection and friendship are more than means for a more fun life; they're literally a life saver.