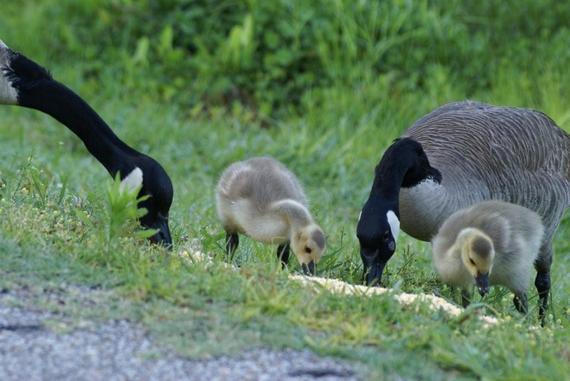 In more than a decade of studying Canada geese, I've been privy to behaviors most of us never see: private moments between goose and gander, the extraordinary sense of family, reunions with family members that have been gone for months. My geese study group, an extended family of about 25 geese, flies in and out of a city lake in central Alabama. The lead pair are Zoey and Dad, (breakfasting on cracked corn with their young).

1. Canada geese purr like cats when content. Not the long, continual purr of the household cat but a series of intermittent (start-and-stop) purrs. If a goose purrs in your presence, consider it an honor. Or if one runs its beak across your back or down your side, that's considered a hug in geese society. My study group of geese - the parents, siblings and aunts, uncles and cousins with whom I've bonded over the years - break out in a group purr as I walk through, sounding like a celestial chorus in the wild. I walk through just to hear it.

2. Goslings (the young) could teach us a lot about sibling love. I have seen brothers and sisters coo to one another with sheer, unabashed affection, and wondered how they managed to get it right and we didn't. In their world, sibling rivalry is for the birds. They seem to have grasped the notion that developing a support system with your brothers and sisters forms a healthy basis for future relationships. Offspring also never, ever disrespect a parent. Such a thing would be unthinkable in geese society. (If only we could just transfer that quality to their human counterparts.)

3. After years of study, I concluded that the Canada goose is the most joyous creature I've ever known. There seems to be a natural effervescence, an inborn enthusiasm that carries over from generation to generation. I've never seen anything like it. According to the goose mantra, every moment is to be cherished, savored, revered. They may experience sadness over the loss of a mate or gosling but long-term depression seems to have no place in their realm.

4. A Canada goose never forgets a face - or a kindness. Give one treats or rescue an injured goose and you have made a friend for life.

5. Canada geese families are very territorial, wanting no other geese near their young. Usually, the dads will duke it out, briefly grabbing each other's necks or just flying over the other's head, the ritual satisfied. However, there's one ritual that is reminiscent of a boxing match. On rare occasions when two ganders engage in a prolonged neck duel, the other geese will gather around in a wide circle, honking and clamoring their excitement, almost as if they're cheering an opponent. Eventually, some of the geese will interfere, putting a stop to the altercation.

6. Contrary to popular belief, Canada geese don't stay in one place. They're constantly on the move. People think the geese they observed at a city park or pond yesterday are the same geese there today. Trust me. Unless they're injured, those geese have moved on. Resident geese are as addicted to flight as their migratory cousins. While they may not make the annual thousand-mile journey to Canada and back, they spend much of their time in the skies, pond-hopping from one U.S. park or waterway to another. John Hadidian, suburban wildlife director of the Humane Society of the U.S., once told me that 300 miles is nothing to a goose.

7. Like humans, young Canada geese - or juveniles, as they're called -- go through a lengthy transition to adulthood, trying like teenagers to find their place in the world. Siblings, as new bachelors and bachelorettes, sometimes stay together for years or until they find mates of their own. Like their middle-school counterparts, the youngsters' voices also begin to change at some point. Suddenly the young geese sound hoarse and raspy as they transition from baby sounds to the deep-throat voices of adulthood.

8. Canada geese are highly compatible with humans, treating them with inordinate gentleness. Rarely are the adults aggressive toward people - and usually only during nesting season when they're protecting their young.

10. Every summer Canada geese are grounded for six weeks during the annual molt while they await the growth of new wing feathers. That's why you see hundreds of geese temporarily stranded at city lakes and ponds. They tend to band together in large numbers for safety. They are grossly uncomfortable at being grounded, even for a short time. Treat them kindly. And don't allow the feds to round them up during this trying time. Remember that, unless there are young, in a few weeks, the geese will be gone.