If you asked me a year ago what I knew of congenital heart disease, I'd be able to tell you a couple of vague details involving an explanation on birth defects and how I knew someone whose kid had open heart surgery when he was three to repair a hole in his heart. I'd tell you how I just saw him, running around and playing, the picture of perfect health.

I would have told you that, and while some of it is correct, I would have been largely mistaken about the prevalence, the severity of diagnoses, and the problem which congenital heart disease is.

If you would have asked me a year ago when I was six months pregnant, I would have told you how terrifying it would have been for me to hear the word "heart condition" mentioned during an ultrasound. I would have not understood that the baby I was carrying could have a potentially life-threatening condition. I would not have understood, and frankly, if I could, I would have run as far away as possible from any mentioning of such things.

And yet, nine months ago, I gave birth to a beautiful baby boy who just so happened to be purple and at birth had oxygen saturations in the 60s. That baby boy underwent open heart surgery at 16 hours old after several misdiagnoses, an ambulance ride, and one life flight later. And that day, we were told again and again to give that beautiful boy his last kisses, to take his last pictures, to capture each moment as a precious memory, because there was a good chance that we would only have a handful of moments left. And we did. We had nearly seven months of moments before Charlie went to heaven. Seven months full of smiles, full of trials where he proved to everyone that he was as tough as nails. But the giant of congenital heart disease fought back, and Charlie got tired, and he passed on October 27th.

There are many things that need to be said about this, because frankly, congenital heart disease does not get the awareness, funding, or research that it so desperately deserves. 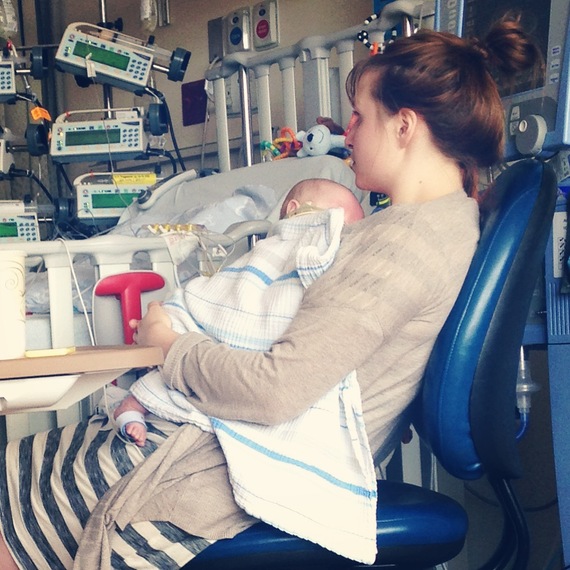 Here are ten things you need to know about congenital heart disease, not told by a doctor, but by a momma who lost her baby too soon.

1. It can affect anyone. It doesn't matter race, age, or social class, congenital heart disease, like many other diseases, can happen to anyone. It does not discriminate and it can occur in pregnancies in which the mother did everything right and nothing wrong. I would never have guessed in a million years that I would have a child with a critical illness, let alone a heart condition that would lead to his death.

2. It is more common than you think. In fact, congenital heart disease occurs in 1 in 100 births, meaning CHDs are as common as autism.

3. It doesn't make our kids defective. Hopefully this goes without saying, but I'll say it just to make sure... Just because a kid was born with anatomical differences, it is not their fault, it does not make them less valuable, it does not make them less loved, and it doesn't make their death any easier. They should be valued. They should be loved. They should be mourned just as much as you would mourn a kid who was born with all their anatomy and chromosomes and appearances being normal. Even if they have a syndrome, even if their veins are going to the wrong place, even if their "abnormality" affects their appearance, they are still a baby, which is still a human, and their life has as much value as your's. Period.

6. There is no cure. Most congenital heart defects require surgical intervention. When that surgery takes place depends on the type of condition and severity. There are some that require immediate surgery at birth, some before one week old all the way up to early childhood. Contrary to popular belief, surgery does not "fix" the problem, but all of these children must be followed by a cardiologist for the rest of their lives. Even those who are "fixed" live the rest of their life with CHD. Meanwhile, the parents of children with CHD have to live with the fear that it might resurface and cause more issues.

One survivor of congenital heart disease, who is now in her 20s, said this: "The children themselves grow up and live in constant fear that something will surface again. Any weird feeling in the chest, any time it gets just a little bit harder to breathe, it could be nothing; or it could be something huge that will send you back to the operating table. Plus, coming close to the age where I'll have to get my own insurance, it's terrifying knowing I won't be able to get decent insurance, so if anything goes wrong, I'm financially screwed."

7. Congenital Heart Disease generally does not affect only the heart. Many of the kids that have difficulties and long hospital stays, or those that never even leave the hospital do so because their congenital heart disease causes problems with other organ systems. Problems with lungs, kidneys, liver, and the brain are all issues that I have seen arise and even take lives as a result of congenital heart disease.

Charlie's heart is not what killed him. Instead, it was the development of pulmonary hypertension and chronic lung disease. His lungs became so tired, and his lung pressures became so high that his little heart began to give out. There are other kids I have seen whose kidneys have completely shut down, hearts that arrest during surgery or during recovery, or they develop a hypoxic brain injury that leaves them nonfunctional. This is devastating, and even the many children that survive remain on long-term medications and receive long-term monitoring for their secondary issues.

8. It's not very well funded. Although there are brilliant minds and compassionate hearts that have dedicated their lives to helping children with congenital heart disease, we still need more. Congenital heart disease is still grossly underfunded relative to the prevalence of the disease.

9. You can help. Give to the nearest congenital heart center near you. My Charlie received his care at C.S. Mott Children's Hospital in Ann Arbor. We give to them. You can also give to The Children's Heart Foundation. Don't have money to give for research? Help us raise awareness about congenital heart disease by sharing this article and educating others.

Writer and Founder of On Coming Alive