Many of us dream of exchanging our day-to-day responsibilities for a heartfelt life full of purpose, but few of us ever get around to doing something about it. The women featured here are the exception. They followed their intuition against all odds, made dramatic and unusual decisions and sometimes had to fight for their survival in order to lead the lives they envisioned. While iconic archetypes of feminine enlightenment (dakinis in the ancient language of Sanskrit) were erected on shrines, few women in Asia were actually emboldened to follow in their footsteps. That women participate equally is probably the single biggest change with Buddhism being established in the West. Here are ten extraordinary female teachers of Tibetan Buddhism, who have transformed the way Buddhism is viewed in America (more information in the new book "Dakini Power: Twelve Extraordinary Women Shaping the Transmission of Tibetan Buddhism in the West").

"If being a woman is an inspiration, use it. If it is an obstacle, try not to be bothered by it."

Her Eminence Jetsun Khandro Rinpoche's position in the Buddhist world is entirely unique. She is one of the very few fully trained female Rinpoches ("precious masters") in the Tibetan tradition. Born in 1967 as the daughter of the late Kyabjé Mindrolling Trichen, she, her younger sister and her mother were the only women growing up among 400 monks at her father's monastery in India. The Mindrolling lineage is one of the rare Tibetan traditions that do not distinguish between male and female heirs.

Now one of the most influential and vibrant women teachers, Khandro Rinpoche travels tirelessly between her late father's monastery and her own two nunneries in India, her American headquarters, Lotus Garden, in the Shenandoah Mountains in Virginia, and an ever-increasing number of Buddhist communities. In addition to receiving the traditional training usually reserved for male teachers, she also studied journalism, business management, homeopathy and sciences.

With her unparalleled training, she has built a reputation as a sharp-witted and unconventional teacher who is never afraid to "rock the boat" as she continues to question the responsibility and role of women in the Buddhist society. Educating and empowering women is at the core of her work: "Maybe I can be a medium through which more women become confident, dynamic leaders."

First Tibetan woman ever to immigrate to America.

Dagmola Sakya is one of the very few senior Tibetan ladies who were born in pre-Communist Tibet, but are now recognized as outstanding teachers and live in America. Together with her husband, the renowned Dagchen Rinpoche, she established a beautiful monastery in Seattle and teaches around the world.

A combination of the most unlikely circumstances enabled Dagmola to become one of the first Tibetan women to teach in the West. Born 1936 in a tiny village in East Tibet, she was the only girl allowed to go to school. Instead of complying with the established system of arranged marriages, Dagchen Rinpoche fought for her hand. After barely escaping the Communist prosecution in Tibet with her family, she made a new home in Seattle in the '60s with her five boys, while holding down a 9-to-5 job at a blood bank.

Her experience as a working mother of five resonates with many women. When students ask her for advice on how to combine a spiritual path with the stress of modern life, she does not need to put herself in their shoes -- she knows the challenges only too well.

"Practice is in every day life, not just sitting on the cushion," Dagmola says. "Every move, every breath, every thought is practice."

"I took the vow to attain enlightenment in a female body."

Jetsunma Tenzin Palmo (Diane Perry) became famous worldwide through Vicki Mackenzie's book "Cave in the Snow," which chronicled Tenzin Palmo's quest to attain realization in a female body. Born as a fishmonger's daughter in London, Tenzin Palmo has set an unprecedented example of following in the footsteps of the most dedicated Tibetan yogis by spending 12 years in solitary retreat in a cave in Ladakh, immersing herself so deeply in this tradition that she has earned the unabashed respect of traditional Asian teachers and modern Westerners alike. She is the most senior Western Tibetan Buddhist nun alive. She is currently realizing her heartfelt aspiration: to build a nunnery solely dedicated to offering the nuns optimal opportunities to study, debate and meditate -- a privilege usually reserved for monks.

"Even Tibetan masters are beginning to realize, if you want real devotion and focus, you have to look to the nuns," Tenzin Palmo says proudly. "I tell my girls, now you are given all the opportunities, you can accomplish whatever you want!" 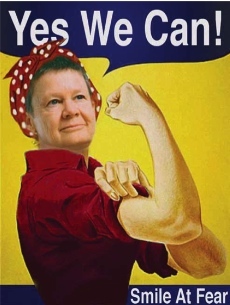 Pema Chödrön, most beloved female Western Buddhist teacher. Collage: Noa P. Kaplan
Facing what scares us is Pema Chödrön's signature topic. A glance at her book and audio titles provides a first-aid kit for handling life: When Things Fall Apart, we have No Time to Lose so that we Start Where We Are, Don't Bite the Hook, and go to the Places That Scare You for Taking the Leap. These slogans from her bestselling books, encapsulate Pema's heart advice. "Dakini Power" describes her own transformation from the Catholic elementary school teacher named Deirdre Blomfield-Brown into a student of Chögyam Trungpa Rinpoche and one of the most successful Western Buddhist teachers. She has established the Pema Chödrön Foundation and is the principal teacher at Gampo Abbey in Nova Scotia.

When asked how she got into Buddhism, she always says half-jokingly: "Because I was so angry with my husband."

Venerable Thubten Chödron is the author of "Buddhism for Beginners" and founding abbess of the innovative Sravasti Abbey in Washington State, the first Tibetan Buddhist monastery for westerners in America. She is renowned for her extraordinary ability to present even the most profound spiritual teachings simply and directly to Western audiences. With her characteristic warmth and humor, she skilfully weaves together traditional teachings with practical advice for modern Western women and men. In "Dakini Power," she speaks about her upbringing as Cherry Greene, a "nice Jewish girl," her years of exploring the counterculture of the '70s, her prison work and her dedication to using the Buddha's teachings on how to work with emotions in a contemporary context. She is faced with the irony that she is perceived as a liberal in traditional Tibetan circles, while some Westerners automatically see her as part of the "hierarchical" monastic institution because of her robes.

Chodron comments, unfazed, "Curiously, while women's issues are at the forefront of discussion in Western Buddhism, once a woman becomes a monastic, she is seen as 'conservative and traditional.'"

Venerable Karma Lekshe Tsomo already had a religion when growing up in Malibu: surfing. But being constantly teased by her classmates about her family name, Zenn ("Are you Buddhist or what?"), she borrowed a book about Buddhism to find out what this was all about and instantly knew that this was it.

Ordained in 1977, she quickly realized that conditions for Tibetan Buddhist nuns were dire. Almost 30 years ago, she single-handedly started a movement to give nuns access to education, at a time when this idea was, at best, treated as a waste of time, or even frowned upon by the established monasteries. She is the co-founder of Sakyadhita ("Daughters of the Buddha"), the most important international association of Buddhist women, and the founding director of Jamyang Foundation, a non-profit dedicated to the education of Himalayan women. In a way, the California girl has come full circle: now she lives in California again, where she is a professor teaching Buddhist philosophy at the University of San Diego. But whenever she can, she goes to see "her" nuns in the 15 study centers dotted all over the Himalayas that would not exist without her untiring efforts.

"Enlightenment is a full-time job."

Sangye Khandro has translated and mastered some of the most profound Buddhist teachings. One of her renowned translator colleagues says she might be the Western woman who has received more teachings and transmissions than anybody else. She lives on the beautiful 100 acres of Tashi Chöling, a retreat and teaching center in the mountains near Ashland that she founded together with her husband and teacher, Gyatrul Rinpoche. She has translated for the finest Tibetan teachers. Despite receiving many invitations, she rarely agrees to teach, preferring a reclusive lifestyle focusing on translations and retreats. Together with her partner, Lama Chönam, she has founded the wonderful translation committee Light of Berotsana.

Lama Tsultrim Allione, charismatic Western teacher and bestselling author of "Women of Wisdom" and "Feeding Your Demons," was recognized and enthroned as an emanation of one of the most beloved female Tibetan saints, the 11th century dakini Machik Labdrön. She balances the commitments for her family and three kids with the passion to bring century old healing practices to the West. Once among the first American women ordained as a nun, she has since given back her vows to raise a family and integrate her spiritual values into a lay practitioner's life. The radical life change led Lama Tsultrim to question: How exactly did motherhood fit in with Buddhism? When she looked at the life stories of the great saints of her lineage, almost all of them were male, and the few women had either abandoned their children or were celibate nuns.

"I had no role models for women in my position, no stories to follow," she says. Her newly built temple, Tara Mandala in Colorado, is dedicated to the "enlightened feminine."

Chagdud Khadro is the title her late husband, Chagdud Rinpoche (1930-2002), gave to Jane Dedman after several years of marriage. Khadro and Chagdud Rinpoche were married for 23 years, until his passing in 2002. Now in her '60s, Chagdud Khadro spends most of her time near Três Coroas on the East Coast in Brazil, in a Buddhist center that bears her name -- Chagdud Khadro Ling. She is especially renowned for her teachings on phowa, the traditional Tibetan transference of consciousness at the time of dying. Her students all stress her impeccable work ethic and humility. Dzongsar Khyentse Rinpoche, whom Chagdud Rinpoche asked to help guide his centers, calls her "a perfect example of a lama's wife. She puts all the others to shame, even the Tibetans."

The power of open questions.

Elizabeth Mattis-Namgyel, the author of "The Power of an Open Question," grew up as the daughter of a communist record manager in Santa Monica, yet amid the anarchistic debates at home, she was eaten up by a yearning question: "What should I do with my life?" A vivid dream during her college years inspired her to travel to Nepal where she met her teacher and husband, Dzigar Kongtrul Rinpoche. She became his first Western student. Under his guidance she has studied and practiced Buddhism for more than 25 years. She spent seven years in solitary retreat in the Rocky Mountains in Colorado while raising her son at the same time. She seems to effortlessly juggle her many commitments as a retreat master, teacher, author, mother and student, and speaks openly about the challenges of implementing Buddhist practices in a modern world.

"It is like an unspoken rule that we don't talk about our doubts or unresolved questions," she says, "and I question that."

Read more life stories of dakinis ("female messengers of wisdom") here and contribute your own experiences and stories of inspiring Buddhist women in the comments!

Click through for a slideshow of other inspiring Buddhist women: 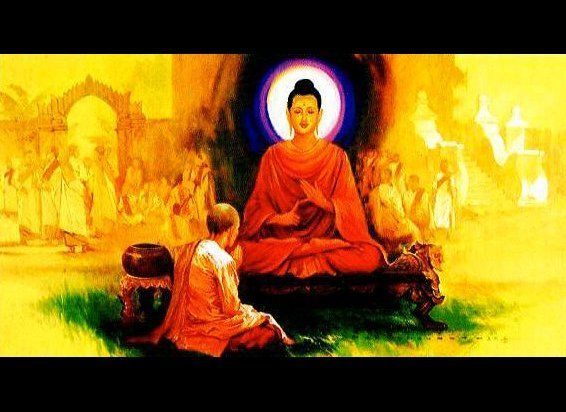