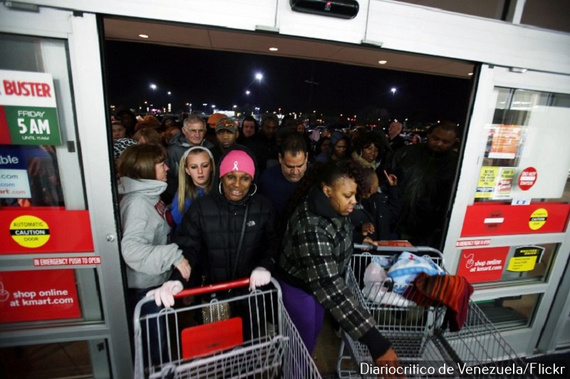 Black Friday is the one-day shopping extravaganza frugal consumers look forward to. On the Friday after Thanksgiving, stores such as Walmart and Toys "R" Us attract dedicated shoppers who are looking to score huge deals before Christmas. And over the last decade, a laundry list of Black Friday blunders have given rise to a wave of violence, arrests, fights and stampedes.

Here is a list of the top 10 Black Friday sales nightmares that happened in real life.

The year is 2011, and the place is Walmart in Buckeye, Ariz., the night before Black Friday. A 54-year-old grandfather is carted off to jail after an off-duty officer who was helping out the retailer said the man shoved a video game under his shirt in an attempt to shoplift the item, reports Azcentral.com. The man's wife, however, insisted that the ill-fated shopper put the game in his waistband to use his hands to protect his grandson from a crush of unruly shoppers. But, police said other shoppers saw him try to steal the game, and that he attempted to flee when police challenged him.

A video of the incident's aftermath raised questions of the police's use of force. The "leg sweep" that took him down left the man bleeding and supposedly unconscious.

Here's another Black Friday nightmare that happened at Walmart in 2011 but this time in Porter Ranch, Calif. This was the site of a new form of Black Friday rage politely referred to as "competitive shopping" by a fire captain who spoke with the Los Angeles Times.

Twenty people, including children, suffered injuries when a woman unleashed pepper spray on the crowd. She used the weapon not to defend herself from an attacker, but to clear a path through the crowd toward "door buster" merchandise. "I heard screaming, and I heard yelling," said one witness. "Moments later, my throat stung. I was coughing really bad and watering up."

The scene, described as pandemonium, included shoppers trampling fallen merchandise as workers scrambled to get out of the way.

In 2010, police arrested a 21-year-old shopper in Toys "R" Us in Madison, Wis., reports CNN. The woman reportedly attempted to cut the Black Friday line and when confronted by angry shoppers who had patiently waited their turn, she told the angry mob that if they didn't relent, she would get her gun and shoot them.

Police didn't find a gun but took the threat seriously enough to arrest her for disorderly conduct. In an interview with CNN, the suspect lamented that she was worried the toy she originally cut the line to get would be gone by the time she was released from jail. "I just wanted to get my daughter the toy she wanted for Christmas ... " she said.

In 2006, a mall in Torrance, Calif., came up with a promotion to give away gift certificates to the mall's customers on Black Friday, reports Business Daily News. Management, however, dramatically underestimated the turnout -- but that wasn't the only mistake the promotion's organizers made.

Instead of simply handing out the 500 gift cards, the staff dropped them from the ceiling on the frenzied mass of 2,000 frantic shoppers below. The result? A melee that left 10 people injured, including an elderly woman.

5. Night of the Flying Laptops

In one of Walmart's more bizarre Black Friday incidents, customers in Orlando, Fla., told reporters in 2005 that laptop computers were being thrown in the air -- sometimes as high as 20 feet, reports WFTV. Although it's unclear who was doing the computer tossing, the chaos led to customers diving and falling all over each other to catch the flying laptops.

When the dust cleared, customers went right on shopping. Some even walked by a handcuffed man who cut in line to get his hands on the discounted laptops. According to the report, the man insisted he attacked plain-clothed security guards only because he thought they were other customers.

Read: Black Friday FOMO: Why We Go Overboard Every Year

Last year, Black Friday shoppers literally threw themselves on top of flat-screen TVs at a Stafford, Texas, Walmart store after waiting in line for a few hours, reports ABC 13 (KTRK-TV). "People were climbing over each other to get a TV," said one witness. "It was crazy."

The shoppers didn't listen to the off-duty police officers' orders, but no arrests were made that day.

When an Upland, Calif., Walmart decided to stay open all night in 2009, management probably thought they were going to reduce the chance of Black Friday chaos by eliminating long lines and a mad rush when the doors opened.  But when rowdy customers began fighting inside and tearing into shrink-wrapped merchandise meant to be opened at 5 a.m. the next day, the retailer decided to call the cops, kick everyone out and clean up before the 5 a.m. sale, reports the Los Angeles Times.

"This was without a doubt the worst I've ever seen it ... There were belligerent," said one employee. "The just bombarded the store."

Irate customers outside then began banging on the glass -- like zombies -- and looking for ways inside. "It was scary," said one Walmart worker.

8. With Child, Without Wig

Black Friday shopping stampedes are nothing new. The scene was seemingly no different in 2005 when, during a promotion at a Walmart in Grand Rapids, Mich., the lure of Black Friday sales led to a scuffle. In this scuffle, as reported by Ranker.com, a pregnant woman was pushed down.

A video shows the visibly pregnant woman panicking and scrambling -- not to protect her baby, but to reclaim her wig, which was ripped off her head in the chaos.

In 2010, police arrested a man in Boynton Beach, Fla., after a Black Friday shopper alerted them that she thought the man had a gun, reports PalmPeachPost.com. It turns out, the over-prepared bargain hunter did have a gun -- a .40-caliber Glock handgun. He also had a 30-round magazine, a pepper grenade, two concealed knives and whole bunch of prescription pills -- but no prescription.

10. 'Self-Defense' and Sucker Punches at Sears

During one of its Black Friday sales in 2012, a San Antonio Sears was the scene where one shopper was reportedly punched in the face. He then pulled out a 9 mm semi-automatic handgun in "self-defense," according to MySanAntonio.com.

Police took the man who pulled out the handgun into custody but later said the man was within his rights when he displayed the weapon. The Sears manager even gave him a store voucher.