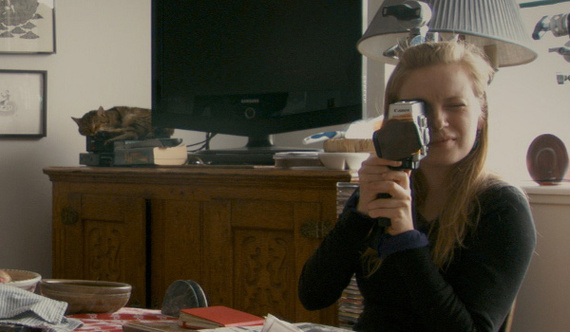 Call it cheating, but I separated out documentaries from narratives for my year-end list. This was just too fantastic a year for these films to compete with movie stars and spectacular CG.

Though I didn't notice while culling my list down to just ten, nine of the movies that made my cut come from women filmmakers, which makes me exceedingly happy.

Sarah Polley -- actor, writer, director -- is a major talent, full-stop. In her documentary debut, she explores her own personal history, turning potential vulnerability into strength as she faces family secrets head-on. What's more, her hybrid approach to storytelling surprises (and delights) the audience at every turn. Don't read anything more about this movie. Just watch it.

The sensational women whom Morgan Neville profiles have rich and layered stories of triumph, defeat and resilience to tell, all set to a toe-tapping soundtrack that forces us to listen to classic tracks with fresh ears. It's the rare universal crowdpleaser that appeals to the hidden backup singer in us all -- this movie just makes people happy.

AFTER TILLER
Directed by Lana Wilson and Martha Shane

Late-term abortion is not an easy subject, even to think about, but these first-time filmmakers have created a sensitive portrait of those involved on both sides -- the families making this heart-wrenching decision (in most cases, due to the very poor health and low life-expectancy of the fetus) and the physicians who offer the procedure. (Since the brutal murder of Dr. George Tiller in 2009, by an anti-abortion extremist, there are only four of them left in the U.S.) The film does not avoid the controversy; rather, it dives right in to show the courage and commitment of these medical professionals.

Running Wild is the portrait of an 87-year-old cowboy poet who has made it his late-in-life mission to allow wild horses to run free. When he was already 62, he established the Black Hills Wild Horse Sanctuary in South Dakota, a 12,000-acre land of rescue for wild mustangs being rounded up by the government; if he had not intervened, they would likely have been penned up or headed to slaughter. The cinematography is majestic, and his story is a how-to for finding one's bliss, at any cost.

Love your brain.
And the Pearce family.

I don't know if there's any movie that's stayed with me more in 2013 than A Place at the Table. Though crammed full of facts and figures about food insecurity, these statistics are heartbreakingly illustrated by real-life Americans struggling through day-to-day food crises. The Mississippi teacher who introduces a honeydew to her elementary-school class is simultaneously one of the saddest and most hopeful scenes you will ever watch. A must-see.

OUR NIXON
Directed by Penny Lane

Richard Nixon and his well-heeled cronies as you've never seen them before. Penny Lane humanizes, exposes and illuminates a critical part of our history. And it's damn entertaining.

The word "hero" gets thrown around a lot, but it should be reserved for people like the public defenders who spend all day every day fighting for people who can't otherwise defend themselves and/or have been relegated to the outskirts of society. What's more, these heroes toil away within a system that does not adequately value their work. Meet Gideon's Army.

American Promise is a longitudinal commitment of a film in which two parents follow their son and his peers through New York's labyrinthine school system (private and public), documenting pitfalls and quagmires that seem to entrench students of color. It's a heartbreaking and personal call to action.

You think *you* made a new year's resolution? Think again. Meet a group of non-professional athletes determined to push their bodies and minds to limits of which most of us could never even conceive. Part sports documentary and part travelogue, Desert Runners is a loving and pragmatic look at ultra-marathoning. (What? Exactly.)

Other films just bubbling under include The New Rijksmuseum (Parts I & II), Let the Fire Burn, Caucus, Remote Area Medical, and Tim's Vermeer.