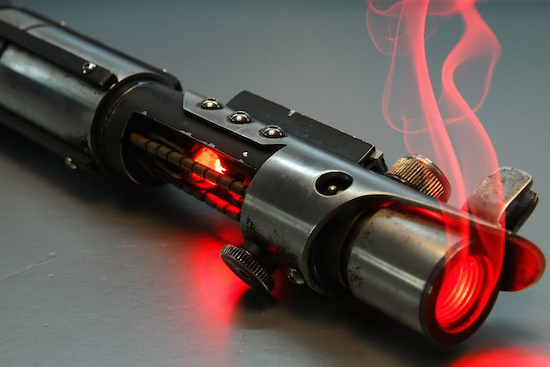 If you haven't been trapped in a cave for the last year or two, you've probably heard about how the film Star Wars: The Force Awakens is on the horizon. Yeah! Director J.J. Abrams is bringing his vision for this epic space saga to the big screen in 2015. And, of course, with a new helmsman and story to tell, we're going to get some great new weapons -- most notably (so far) being the cross-shaped lightsaber.

Nothing in the science fiction universe comes without controversy (at least to the geeks living inside many of us), and this new lightsaber design proves no exception. Luckily, for all of the lightsaber aficionados out there delving into Jedi armaments, the cross blade has found a substantial defense in the intellectual prowess of Stephen Colbert.

The feasibility and combat applications of this imaginary weapon not withstanding, let's take a look at some hands-on, practical lightsaber possibilities here on Earth -- assuming one could actually be built. (For a look at the physics behind the likelihood of constructing a lightsaber in the real world, check out the video at the end of this article.)

1. Shave a Wookiee. If you don't know any Wookiees personally, you could also shave a Lhasa apso or an alpaca. They often look like they're in need of a good shaving.

2. Shave your body. Be very careful if you go this route, irrespective if you're mowing down a bit of leg stubble, or reaching around your shoulders in order to assault some shrubbery sprouting up on your back.

3. Chopping wood. A bloody spot easier than swinging at logs and stumps with a heavy ax. Paul Bunyan would cry with envy.

4. Carve a turkey. Whip out that lightsaber and slice up that holiday bird in a jiffy. Also convenient for shutting up relatives who might be overly critical of your carving technique.

5. General thievery. Really, c'mon, you must have thought about this one, at least once, right? Cut clean through the doors at the bank, 7-Eleven or Fort Knox, and then abscond with the loot.

6. Intimidating coworkers. "No, I won't file that report for you. Do it yourself!" Then chop your troublesome coworker's desk in half with your lightsaber. Irksome conversation has now come to an abrupt end.

7. Build a secret lair. Want your very own Batcave? Yes, I'm mixing fictional tales here, but with a lightsaber, you could carve a secret layer out of a solid rock in no time. Also good for setting up a man cave that will put all other man caves to shame.

8. Exfoliation and skin peels. Only for the most adept wielders of lightsabers. You'll only want to take the top layer off -- otherwise you'll be raw, red and in excruciating pain -- and quite possibly dead.

9. Sculpture. Why use a hammer, chisel or chainsaw to carve your masterpiece when you can use a sustained beam of light instead? And if you don't get first prize at the county fair, you can let everyone know how displeased you are by going on a "saber rage" and taking out all of the elaborately carved pumpkins -- or if you're a real ass, a few of the prize-winning hogs.

10. Smite your enemies. We've all got them. Go ahead, use your lightsaber for what it was intended for, and strike your enemies down. Depending on if they deserve it or not (Bob in accounting most certainly did), you'll be setting the path for your journey to the dark side -- or toward the light.

And as promised, with the help of science, how you might be able to build your own lightsaber one day: