I've written about how millennials are leaving organized religion and its associated anti-LGBT animus in droves. As a result, the only religions holding on to membership (barely) are ones with super-high birth rates and very conservative views. In the process, conservative faiths are becoming increasingly insular and preaching to an echo chamber. This is creating a downward spiral of church membership overall as less and less millennials want to be a part of a brand that is increasingly unpalatable. And make no mistake, it is millennials who are leaving conservative denominations the fastest. 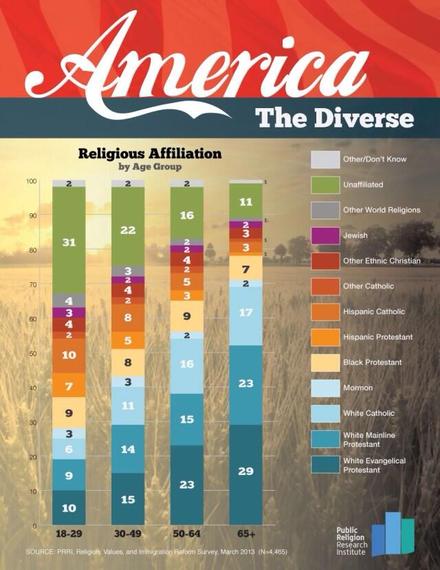 As an atheist and as an LGBT activist, this seems like a good thing. The faster conservative religion is overwhelmingly seen as mean, crazy, violent, hateful, misogynistic and anti-science, the faster we as a society can move on. I'd rather America looked more like somewhere people want to live, than someplace that generates political and religious refugees. 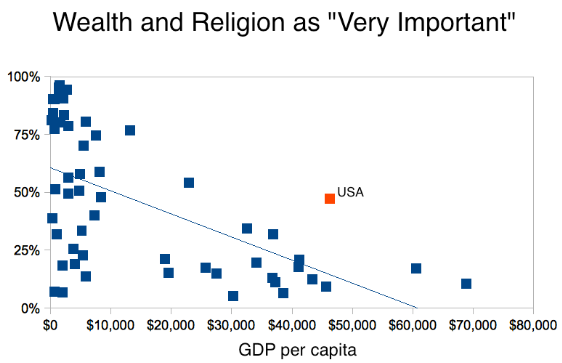 Marriage equality is basically over, and most Americans have moved on, aside from the Kim Davis' circus. "Don't Ask, Don't Tell," and the debate around it are as dead as the dodo too, but America's most powerful anti-LGBT group is still railing against lesbian and gay troops. Even the Cato institute and Heritage Foundation have moved on.

Nothing says: "We're not relevant," like the culture war equivalent of giving CPR to a hamburger.

2. Deciding who's Christian based on how much they hate gays.

Here's the problem: Most Americans aren't this exclusionary, but the people with the biggest podium for their beliefs are the ones who do feel this way. If rejecting LGBT people socially, religiously and legally is your litmus test for who gets into heaven, most Americans will be glad they're not spending eternity with you, either.

Seriously, most men would rather stay at home and watch football on Sundays anyway. With the social pressure to go to church disappearing, the pews will keep emptying themselves.

Scott Walker answered a question about abortion in the first Presidential debate of 2015 by confirming his belief that women should not have access to an abortion, even if continuing the pregnancy will kill them. Beyond that, we have we have pregnancies due to rape are "a gift from God", "legitimate rape," announcing that rape can't happen inside of (heterosexual) marriage.

I think most women will breathe a sigh of relief when the possibility of becoming the Republic of Gilead grows a bit dimmer.

Neil DeGrasse Tyson once said that the great thing about science is it's true whether you believe it or not. Religious conservatives apparently saw this quote, and decided they just don't believe hard enough. It doesn't matter if it is climate change, evolution, the big bang, reparative therapy on LGBT people, sexual orientation, gender identity or reproductive health ("Women's bodies have a way of shutting these things down,") these folks reject the overwhelming consensus of the entire scientific community.

They're cool with treating bronze-age anecdotes as immutable laws of science though.

The rest of are left to look at them and wonder how humanity ever evolved past squatting in a ditch and poking berries up our noses.

5. Condemning everyone else's sex lives but their own.

As mentioned earlier, consent is apparently optional. Procreation is not.

The problem is, they suck at following their own rules.

Lots of down-low gay sex and blaming getting caught on gays. Cheating on their spouses and blaming it on gays. Sex with minors as a high school coach. Letting their kids molest their other kids then announcing God has forgiven the molester for everything. Blaming transgender people for your kids molesting your other kids. Priests molesting kids, and the Church blaming the problem on gays. Having multiple children with multiple fathers out of wedlock is ok too, because God understands people make mistakes when your mother is named Sarah Palin.

No wonder millennials aren't taking any of this seriously.

6. Telling people freedom of religion is only for Christians.

Many conservative leaders have also pushed the narrative that freedom of religion only applies to Christian denominations, and definitely doesn't apply to atheists or Muslims. So, while making the argument that religious freedom is the ultimate right we enjoy as Americans, it's only for the right sort of Americans. Which are those who believe exactly the same way they do about gays, women, Muslims, atheists, immigrants, etc...

7. Telling us all the awful things they'd do if they didn't believe in God.

For some reason, every time a conservative Christian like Phil Robertson or Mike Huckabee imagines what it would be like if they were LGBT or an atheist, what comes out sounds like a PCP induced crime spree. Voyeurism, rape, bestiality, murder and any other atrocity can imagine.

Um, as an atheist, the thought that all that stands between you and going Charles Manson on us is the threat of punishment from a supernatural deity is beyond terrifying.

8. Taking out their phobias on children.

Nothing says more about a persons' character than how they would treat innocent children. So when doctors refuse to treat children with lesbian parents, it sort of shows your true colors. When adults are showing up to stage hate-fueled rallies and screaming at transgender children trying to go to school, there's pretty much no way to make your actions look warm and fuzzy.

9. Equating religious freedom with a special right to discriminate.

Christian conservatives are working hard to create the narrative that most important religious freedom they possess is the right to discriminate against LGBT people. It doesn't matter if it was 60 years ago or today: "we don't serve your kind here," is ugly. When your most cherished religious belief centers around something most people find deeply disturbing, it just tightens the spiral.

Anti-LGBT religious conservatives, who are predominately based in the deep-south, keep worrying they'll be viewed in the future the same way racist people are today.

Well duh. What do you expect to happen? It's the same people doing the same things they did 60 years ago expecting a different result.

People incapable of learning from history are sort of doomed to repeat it.

10. Showing how much you love people by harassing them

The idea of "witnessing" to LGBT people and their allies is basically a form of pestering LGBT people about how much they are going to hell if they don't stop being gay.

As if LGBT people haven't been told this their entire lives, and forgot the first thousand times. It's also become a form of trolling.

Evangelicals and even Mormons have complained that they're not allowed to do this sort of thing at work, to co-workers, employees and kids at school. When they are prevented from doing this, it rapidly devolves into a Monty Python sketch about being repressed.

Imagine for a second, though, if a coworker decided a woman in the office was too heavy. Every day he would remind her that fat people are ugly and disliked, that their lifestyle is unhealthy. He proceeds to leave weight watchers coupons and books about dieting all over her work area. When told that this behavior is unacceptable, he responds that he is only telling his co-worker she is disgusting and unlovable as long as she chooses an unhealthy lifestyle because he wants what's best for her.

This is clearly horrendous behavior, but when they sprinkle some religious pixie dust on it, we are suddenly expected to see it as a noble expression of First Amendment rights.

I'm not buying it, and neither are millennials.