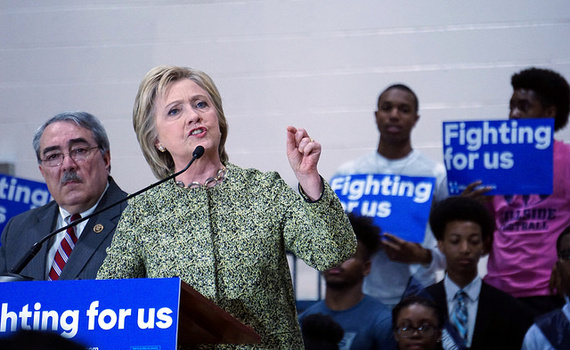 **Crossposted at www.braintrustlive.com, where Lila co-hosts the Brain Trust Live podcast and blogs regularly about politics.**

Hillary Clinton. She's been rolling like a political behemoth and inevitable winner for years, but she's having trouble convincing young voters to buy into that narrative. This might be because instead of building bridges to this cohort, Clinton's campaign seems a little confused by them, unfamiliar with their priorities and judgmental about their unfashionable optimism. In fact, the entire establishment wing of the Democratic party seems to be just behind the horizon on a massive millennial learning curve, still wondering if it's still fashionable to malign us.

With that in mind, we wanted to step in with some possibly condescending but absolutely imperative advice. We're open about the fact that we're Sanders fans and we're not in any way ceeding to the narrative that he's lost before much of the country has voted, but we do think that, regardless of the eventual outcome, Clinton should start reaching out to young voters now if for nothing else than for the sake of the Democratic party as a whole. Millennials will become the largest voting bloc in America in the next few cycles - any party or candidate that wants to be elected or relevant in the future needs to start earning their loyalty ASAP, and Clinton will need these energetic young voters to join her camp if she does in fact become the nominee.

Here, then, are some steps she could take to make contact with those of us that are way out in Sandersland and unreachable via doomsday scenario scare tactics:

1. Encourage Debbie Wasserman-Schultz to resign and support the bid of a younger, more progressive leader to head the Democratic National Committee. Not only is the future of the party's membership projecting values that resemble FDR's democratic socialism over Bill Clinton's neoliberalism, but it's damaging to Clinton's reputation that she appears to be buying her nomination with the help of cronies on the inside. DWS has become the symbol of that problem. Bringing in new leadership will help the DNC look like a fair broker to younger voters. It will also provide them with a large, supportive base for years to come.

2. Denounce the new DNC rules that allow campaigns to accept lobbyist money. Clinton already has to answer for her close ties to Wall Street and the millions she's been paid for speeches to corporations and banks. The DNC conveniently lifting a ban on lobbyist money just as she faces a small-donation-fueled challenge makes her look like an even bigger part of a problem, and it's a problem that young voters are clearly troubled by. Sanders is running heavily on a campaign finance reform platform and if Clinton's campaign war chest appears bloated by corporate donations, his voters will have to betray one of their most important principles in order to vote for her in the general. The first rule of Sandersland is that it's inappropriate for candidates to be financed by non-human, money-driven, corruption-enhancing entities. Meet us halfway.

3. Encourage the DNC to let go of the superdelegate system and encourage this year's superdelegates to vote for whomever the voters choose. This is yet another way to look responsive to voters instead of cronies and will diminish the shadow-government reputation the Clinton/"New Democrats" wing of the party has developed. If Hillary truly believes she is the most electable, most reasonable Democratic choice, she should feel comfortable encouraging the party to stop thwarting the Democratic process.

4. Sign onto the $15 minimum wage movement. Clinton's reasons for advocating for $12 instead of $15 illustrate the major issue with the Clinton politicking ethos - a propensity to start a compromise from behind. We have a deadlocked Congress, so a higher minimum wage of any amount isn't likely to pass. Advocating for a $15 minimum wage at this point is more about starting the conversation than getting anything done at the national level. Sanders instinctively understands this on a wide variety of issues, which is why he can come out in favor of policy that is "impossible" in the short term without irking his supporters. For Clinton, what harm is there in joining the $15 movement instead of stubbornly insisting it's more "reasonable" to stick with $12? What harm is there in advocating for $10000/hour for that matter? None. The answer is none. It's a no-brainer that's of major import to young voters, many of whom graduated into a bad economy in debt and are now looking at earning artificially depressed wages for the rest of their lives. It's also of major import to a constituency Clinton claims to represent well - women. After all, two thirds of minimum wage workers are female. Clinton should have enough respect for both of these groups to get on board.

5. Endorse the 50 State Strategy. Clinton often seems like she's entrenched in an approach to campaigning and politicking that privileges being careful over being ambitious, and Howard Dean's brainchild is, by its very nature, almost an anathema to her style of politics. Still, much of what's driving this year's populist surge is the widely-held perception that Congress, due to years of gerrymandering, is a lost cause. Advocating a "give everybody a candidate" line would make her look less like a lone wolf obsessed with keeping her political machine running and more like somebody who is invested in and optimistic about the future of the party as a whole. Supporting candidates at the local level also provides an outlet to ornery voters who aren't thrilled with her platform but could be driven to the polls by grassroots excitement. When Howard Dean ran the DNC with the 50 State Strategy, it was wildly successful and led to victories in some seemingly unwinnable districts. Sanders regularly mentions it on the trail and in debates because, as a challenger candidate. he knows that sometimes Democrats find constituencies in unexpected places (like a 74 year old man finding college-aged supporters the nation over). Clinton, by contrast, seems like she doesn't want to extend an invitation to participate to anybody not hand-selected by her. An acknowledgement that people want and deserve a choice, even in entrenched, hopeless districts, will help convince younger voters that our democracy is responsive and worth participating in even if you can't always cast the exact vote you'd like.

6. Find a progressive, exciting challenger in a hopeless district (or two, or ten) and support them. If she can't move that far to the left herself, Clinton could at least be associated with somebody who is. Bonus if this person is younger than 70 years old, because just getting endorsements from grumpy old men and women in Congress and the Senate isn't going to cut it. Sanders has just sent out fundraising emails in support of Lucy Flores in Nevada, Zephyr Teachout in New York, and Pramila Jayapal in Washington. Clinton needs to work quick to snatch up endorsements from emerging, exciting candidates and commit to helping them fundraise.

7. Nix the aggressive realism talk. We get it. Older folks have seen a thing or two and don't want to waste time making old mistakes. Age breeds wisdom and such. Still, it's not fair to tell America's 20 year-olds that a single-payer system will "never, ever happen," that money will never fully get out of politics, that now is "not the time" to talk about a $15 an hour minimum wage. Young voters deserve a chance to be optimistic about reform, not only because millennials were the impetus behind some of the most rapid social change in history in the last few years, but because telling us things can't change condemns us to a lifetime of disappointment without giving us a chance to even try for something different. Clinton's hands are tied when it comes to certain issues because of her...shall we say...fundraising obligations, but she needs to find a way to explain her compromises away without insisting that voters can't dream. The young can afford to play the long game, and respecting that is going to be more effective than trying to bully angry, indebted, unemployed young people into voting on the basis of threats about the alternative.

8. Acknowledge her differences with Obama. We get it, she's trying to cozy up to the popular current administration in an effort to earn back the African-American vote that abandoned her in 2008. Still, Clinton absolutely must stop trying to ding Sanders for disagreeing with Obama from time to time. People on the left disagree with Obama sometimes, and they want to hear that it's ok to feel that way. Young voters especially are not moved by obsessive and irrational party and establishment loyalties -- we came up in their heyday (the Bush years) and it wasn't so awesome.

9. Acknowledge some of the failings of the first Clinton presidency. Obviously Hillary doesn't want to throw her husband under the bus, but she went on record in support of a lot of unsuccessful and even damaging policy in the 90s. She didn't enact any of it personally - she wasn't serving in elected office at the time - but as a very public part of the first Clinton administration and especially that administration's communications efforts, she has some things to answer for. Many Clinton era "successes" have come back to bite the poor, the incarcerated, and, yes, women. Hillary claims she's "evolved" on trade, criminal justice reform, and financial regulation, but it would be great to see her go into specifics without having to be prompted by activists interrupting her and angry Twitter brigades. Young voters are products of the Clinton era, but they have some issues with the legacy of those years - Hillary seems to think that Bill's cult of personality extends to the young and it doesn't.

10. Release the damn transcripts. Even the New York Times is calling for this. It's never going to go away. What is in those corporate paid speeches that's worth this amount of speculation?

The Sanders "revolution" is not just about Sanders but about some of the left's long-buried and much revered ideas about democracy and equality. Some of these are ideas Clinton could embrace without straying too far from her neoliberal roots and some of them are things she should embrace now, before it's too late and we all wind up reliving a less sepia-tinged version of 1968.

Also, one final note to the Clinton hoards: In Sandersland, the job of generating loyalty and excitement belongs to the campaign, not the voters. As a result, Sandersland voters may not show up for a candidate just because the GOP is terrible and Trump is evil and Clinton is marginally better. As Clinton supporters you are absolutely welcomed to disagree with this approach, but at this stage it's worth considering how to work with the Sandersland mentality instead of trying to destroy it. His young voters bring a lot of energy and excitement in every campaign they touch, and they're a very useful source of grassroots action.

We know that we've said on the podcast that we'll never vote for Clinton, even if she's the nominee. We've documented why extensively. We challenge you to change our minds!