I'm not religious -- I write this as a law and sustainable business professor who researches, teaches, and consults on how organizations can profit and thrive while meeting human needs and eliminating harms to the environment.

When someone asked me whether Pope Francis' Eco-Encyclical "Laudato Si" matters, I was likely not alone in first thinking: "Nice, but so what? When's the last time a pope played a crucial role in the course of world events?" 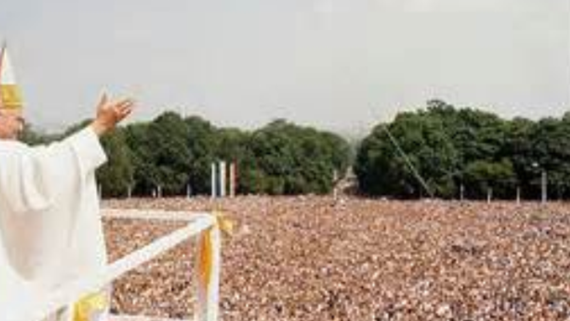 By all accounts -- including that of Mikhail Gorbachev -- Pope John Paul II (JPII) played a vital role in the collapse of Communism at the end of the 1980s. Among other sources, Tad Szulc's biography of JPII offers details from a variety of perspectives. Essentially: JPII's 1979 visit to his homeland helped inspire a critical mass of 10 million people to join the Solidarity movement in Poland in the 1980s, which peacefully negotiated the first open election in the Soviet sphere of influence in 1989, which precipitated the revolutions in neighboring countries that culminated with the dissolution of the USSR.

So how is Pope Francis and his support for the green movement comparable to Pope John Paul II's support for a mass movement against Communism in the 1980s?

Perhaps the question could be generalized more, to asking when and how individuals like Gandhi, Rachel Carson, Martin Luther King, Wangari Maathai, or Nelson Mandela can matter in the much larger history of "inevitable" movements? Perhaps some of the observations below are applicable to their contexts and others.

Regardless, a few defining features of our present context must first be acknowledged. We're past some tipping points. Climate change and mass extinction and pervasive pollution are current realities. Even assuming civilization can avoid some worst-case scenarios, how could a pope affect a world where fossil fuel companies count their profits in the tens of billions of dollars per year? Where billions of us live and work and play in a way where we cannot avoid (or where we even enjoy or take pride in) buying and using products that contribute to ecological problems? As Stalin supposedly said when asked about the significance of the Pope, "how many (military) divisions has he got?" These days, the analogous question might be "how big is the Pope's marketing and lobbying budget?" And yet Stalin's USSR eventually crumbled. So it begs the question answered below.

Here are 10 ways Pope Francis' boosting of the green movement may be compared to JPII's inspiring the Soildarity movement of the 1980s:

1. A dominant and entrenched set of institutions seeking to self-servingly preserve the status quo at the expense of others, rather than massively reforming or allowing a paradigm to fundamentally shift. This is not something new in the history of political or business institutions. Neither are unforeseen revolutions, including peaceful and gradual ones.

2. People, with a changed mindset, can cease cooperating with the dominant paradigm. Books and online sources abound with models of technology and business and lifestyles that are lower or even "net zero" in impact on the environment. Examples of "blue" or restorative economics, supply loops, and biomimicry should studied as foundational material in schools. The good news is most of us don't risk prison or death for consuming less, figuring out how to commute without a car, or adopting other lifestyle changes that make us happier and healthier while reducing our environmental footprint. At this point, we arguably are most in need of a collective shift of mindset or focus on thriving rather than consuming.

3. Movements have already been at work for over 50 years. In Central Europe, and especially in Poland, resistance to foreign-imposed dictatorships had a long history predating even Soviet times. Similarly, modern green movements have been at work for half a century, and trace their history back further to conservation movements and arguably even older wisdom traditions of simple and healthy living. In both cases, a charismatic spiritual leader is entering the narrative at an opportune moment.

4. The "Big Lie" of the status quo has become a tragicomic self-parody. Especially when it comes to denying climate change. Beyond that, we know, as well as a citizen of the Soviet sphere of influence in the 1980s, that the current dominant paradigms cannot last and increasingly lack moral authority and are not trusted as assuring a fair chance to prosper and be happy. This is not only the case in the developing world. Consider public opinion statistics on trust in banks, businesses, and governments in the EU and USA and elsewhere in developed countries following recent economic collapses and lingering uncertainty.

5. A tiny fraction of a large population can have a disproportionate impact. Solidarity constituted less than 0.25 percent of the population of the Soviet Empire. In 1980 it was outlandish to think that an unarmed, unpaid, and peaceful labor movement of 10 million people in one satellite state could precipitate changes that a decade later would lead to a change of paradigm for a region of roughly 400 million -- one that involved the dissolution of a superpower run by a single party dictatorship with a propaganda and surveillance apparatus and a monopoly on -- and history of brutal and widespread use of -- violent force. In contrast, worldwide there are over 1.25 billion Roman Catholics, or about 17 percent of the world's population whom the Pope presumably influences the most, and the green movement at least (for the most part) does not need to fear violence and death as a consequence of agitating for change.

6. Yes, this is spiritual (especially to indigenous people around the world), and an economic and security issue, and a matter of survival for many. Consider that still more than 2 billion people live on less than $2 per day without access to sanitation and assured access to safe drinking water. These are the populations that have been and are and will be suffering the most this century from climate and pollution related catastrophes. Some of these populations include large percentages of Catholics, by the way.

7. This is going to take a while, and it may be rough. A decade would transpire between JPII's first pilgrimage to Poland and the negotiated open elections -- a time when people were killed, martial law was imposed, and shortages of essential goods were endured. A goal of a "net zero negative impact" civilization, if even achievable, is similarly a long-term and difficult goal for which to strive.

8. Unforeseen (even unaligned) allies and trends may help. Consider the role of the Mujahideen in Afghanistan in bloodying the nose of the Soviet Union in the 1980s. Hardly aligned with the Vatican, but similarly key to how history unfolded. Similarly, disruptive companies like Tesla and Solar City, while unaligned with the Vatican or green movements per se, are essential to the dominant paradigm losing ground to a more sustainable model of how civilization can function.

9. The Pope can be a "detonator" (in the words of General Jaruzelski) or catalyst, if we prefer a less incendiary term. Every point so far builds to this: technologies and know-how and a critical mass of people supporting a paradigm shift can be ready, but it sometimes helps to have a few key personalities "in the right place at the right time" to inspire the rest of us to pull together.

10. Ultimately, it's not about the Pope. JPII himself wrote it would be "ridiculous" to believe that he brought down Communism "with his own hands." It's up to the rest of us -- perhaps even a small minority -- to stay inspired and work within our own sphere of influence (at work, at school, at home, at play) to take action.

We could add an 11th observation, but at this point it is conjecture in the context of the green movement: (a) we collectively can't always see a paradigmatic change when it's about to happen, and when it does, (b) we quickly start taking it for granted, (c) chalk it up as "inevitable," and (d) move on to complaining about something else. If and when humanity succeeds in making the changes needed to have a "net zero negative impact" civilization, we may repeat that pattern.

Let's hope (and/or pray, if that's our style) that we get there.