I love to read the news, but I disdain headlines that read, "Dog Bites Human" or any derivation of, "Dog Maimed", "Dog Kills", or "Dog Injures". I don't think dogs should bite people, but sometimes they're left no other option.

Dogs are constantly blamed, but that isn't always fair. There are some situations where it's the person who has pushed the dog beyond its limit. 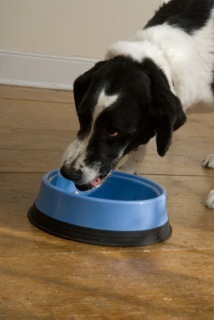 As a mom of two elementary age kids, I get the concept of feeling pressed to the wall, but unlike a dog, I have words at my disposal and teach my kids to voice their feelings as well. Dogs don't have words, although they routinely feel a similar sense of confusion, fear and frustration. While dogs do communicate, they use postures in place of words. To hear a dog, a person must listen with their eyes. Until the public learns how to do this, however, many people still unknowingly over-step their boundaries and get bitten.

So what happens when a dog bites? The dog in question (and other dogs by association) is reduced to a reactive public menace and is legally forced into isolation or worse -- euthanasia. The public's take home message is, "Dogs who bite are dangerous." Case closed.
This verdict, however, lets humanity off the hook. My hope in 2014 is to encourage people to take some responsibility for being bitten, and trim this dog-bites-human statistic by a few percentage points. How? Through education, of course.

I've written a series of articles to explain why dogs bite and what you can do to avoid frustrating or scaring a dog to the point of reacting. Here is my top ten list on how you can avoid a dog bite in 2014. I will elaborate on each of the following steps in the coming weeks.


1. Don't stare. Staring is rude! We all learned that in kindergarten, but few teachers taught us that it applies to all species. No matter how many legs you walk on, staring is rude, unpleasant and confrontational.
2. Don't take it personally.. All dogs do not love all people. Don't take it personally. If you hold out your hand and the dog doesn't step forward, move on. If a dog scares you, step back. Immediately.
3. Recognize each dog breed's personality.. Certain dog breeds love to meet and greet new people and dogs, others not so much. Recognizing breed difference is helpful.
4. Identify a dog's personal space. You don't like it when people crowd you, especially when you're busy, pre-occupied or resting. Give dogs the same respect.
5. Let the dog approach you. Dogs are nearsighted and recognize new people by smell, not sight. Let dogs be the first to approach, and let him sniff you over.
6. Listen with your eyes. Dogs use posture and facial expressions to convey emotions. Here you'll learn how to tune into a dog's perspective.
7. Let your body talk. Dogs do not understand words. Simple postures speak louder than words.
8. Never assume a dog is friendly. Always ask permission before approaching a dog. If you're a parent, understand and respect your kid's perspective. You're responsible for both the dog and the child.
9. Doll it out. Dogs, like kids, love treats. Keep a pocket full of goodies if you hope to make a new friend.
10. Move in slow motion. Dogs -- like people -- are a little suspicious of anyone moving too quickly. If you find yourself around an unfamiliar dog, take it slow.

As a trainer who's seen just about everything -- from dogs being insufferably restrained and poked to shocked and shouted at -- I'm amazed that dogs don't bite people more often.
As dogs have the same emotional range as young kids, compare a dog's tolerance to that of a typical five year old. If I treated my son the way many people treat their beloved dogs -- with unpredictable seclusion, leash dragging and random play interruption -- he'd use words (loud, loud words!) to voice his confusion. And if he didn't have words to express that confusion, he'd be bearing his teeth and throwing punches for sure.

Of course, there are fun and positive ways to encourage cooperation and to condition dogs to comply with our civilized habits, but I will thread those into a later article. For now I'll simply tell you how to avoid getting bitten by a dog. We'll start with step one.

Step One- Don't Stare
As kids, we learn that staring is rude, though few of us emerge unscathed by a social stare down or two. Now apply this to dogs who are equally unsettled and suspicious of social stare downs. I leave you with two considerations:

1. Avoid Staring at Dogs: Do not stare at an unknown dog, whether you're fearful or enthusiastic to meet them. Looking is fine, but any direct eye contact over 3 seconds may trip a dog's tolerance level and prompt a hyper or defensive reaction. Where should you look when petting a dog? I set my sights above the dog's head or to the person holding the leash.

2. Steer clear of a dog who stares at you: Being stared at is unnerving no matter how many legs you walk on. A dog who stares is contemplating your next move. Be wary and keep your distance. If you stare back or approach cheerfully the dog will rise up to engage you. If you're forced to stand in the presence of a dog who is watching you, turn sideways, relax your shoulders and look down.

Stay tuned for steps two and three in the coming days. In the meantime, please comment with your thoughts, stories and questions and give your dog a pat, two extra biscuits and a belly rub from me.