On a recent Thursday morning, I was perusing Facebook and saw dozens of Throwback Thursday photos being posted by my friends. Now I have nothing against #TBT, but I wanted to post something a bit different. Keeping alliteration in mind -- hey, it had to be catchy, right? -- the first "th" word that popped into my head was "thoughts."

I grabbed the legal pad and pen that were sitting next to me and quickly jotted down a list of 10 off-the-top-of-my-head thoughts that I feel are incredibly important for people to carry around with them -- and practice -- during their lifetime. Ten rules to live by, if you will. Sort of an owner's manual for how to be a better human being.

It only took me about a minute to write these "Thursday Thoughts" down. But reading the list and thinking long and hard about each one of these concepts -- and how you measure up -- may get you lost in thought for quite some time.

1. Be kind.
This should be obvious, but there are so many people out there who seem to forget how much of a difference kindness can make. When people are kind to each other, it's contagious. Kindness breeds kindness, and there's nothing wrong with that. I believe it takes more energy to be unkind, so why bother? There is a magnet on my refrigerator that says, "Be kind. No exceptions." Amen.

2. Care about and help others.
Everybody in this world has their own issues. Regina Brett wrote, "If we all threw our problems in a pile and saw everyone else's, we'd grab ours back." Ain't that the truth. I have a son who battled addiction. But many parents lose a child to addiction. I am currently unemployed. But at least I have a roof over my head and a wife who is working. You get the idea. Caring about and helping others should be a basic human instinct. When you see people in need, ask what you can do to help. Donate to charities when you can, even if it's a couple of dollars. We need to be a more compassionate society.

Gratitude begins in our hearts and then dovetails into behavior. It almost always makes you willing to be of service, which is where the joy resides. It means that you are willing to stop being such a jerk. When you are aware of all that has been given to you, in your lifetime and the past few days, it is hard not to be humbled, and pleased to give back.

4. Enjoy every day like it's your last.
It may sound cliché, but yesterday is gone and tomorrow isn't here yet. In fact, tomorrow might not even show up. So what's the sense in dwelling on the past or the future? Live in the moment! We're all dying. Let's live each day to its fullest! I've worked hard at trying to live this way over the last couple of years, and it's made my life so much more enjoyable.

6. Love more.
Love is so much easier than hate. Love makes people feel good. Let's just vow to love our fellow humans, okay? (While we're at it, let's throw in animals, too.) There is so much hatred in the world. People hate people for the color of their skin or their political or religious beliefs. Here's a newsflash, people: we're all human beings. Like Marvin Gaye sang, "Only love can conquer hate."

7. Set an example for your kids.
Too many parents berate their kids for certain behaviors that, unbeknownst to them, were learned from... them. Children are the most impressionable beings on the planet. If you want them to act a certain way, be the example for them. Like it or not, you are your child's biggest role model.

8. Being "rich" involves much more than just money.
Our society is so hung up on money and material things. People ring up credit card debt left and right just to keep up with their friends and neighbors. The latest cars and electronic gadgets are a necessary status symbol for too many. Sure, we all need money to live. But I would rather be rich emotionally than rich financially any day of the week.

9. Listen.
Sometimes all people want is someone to lend them an ear and listen to what they're saying. Whether it's your child with some news about school or a friend whose marriage is crumbling, when someone seeks you out and wants to talk to you, commit to listening -- not just hearing.

10. Forgive.
This might be the toughest thing on this list. I struggled with forgiveness for years, as so many other people do. But an Anne Lamott quote finally convinced me that forgiving my alcoholic father was better than the alternative:

Forgiveness means it finally becomes unimportant that you hit back. You're done. It doesn't necessarily mean that you want to have lunch with the person. If you keep hitting back, you stay trapped in the nightmare.

So there you have it. Those are my "10 Ways to Be a Better Human Being," born out of a simple Facebook post on a Throwback Thursday. How do you measure up? And what, if anything, would you add to the list? 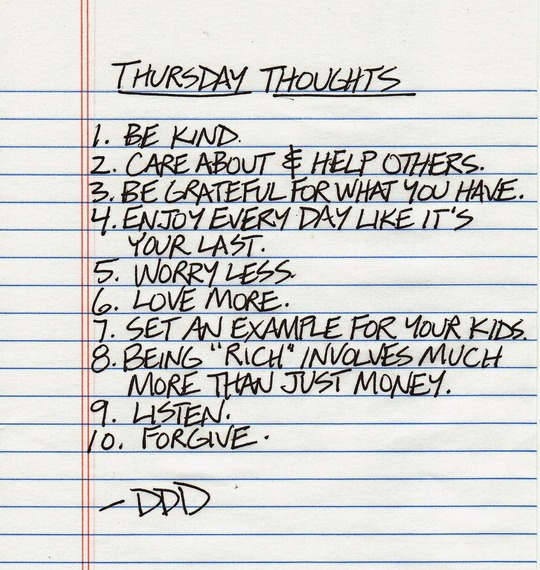