Santa Claus, Father Christmas, Papa Noel, Saint Nicholas -- whatever name you want to call the rotund man in the red suit, it's hard to deny the magnetic charms of everyone's favorite Christmas character. With daily meet-and-greets in his many workshops and grottoes around the world, Santa Claus is just as busy in the lead up to Christmas as he is on Christmas Eve, and there are many ways to get up close to the bearded fellow himself.

Whether you choose to take a trip to the North Pole, check out some of Santa's most unique pastimes or ride in Santa's sleigh, here are 10 spectacular ways to discover Santa Claus around the world. 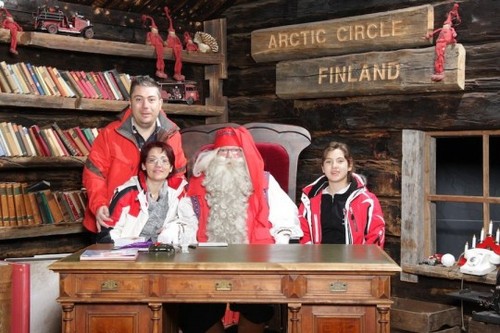 Few places are as synonymous with Christmas as Lapland, the Official Home of Santa Claus, and Northern Finland's magical Santa Claus Village is the ultimate Christmastime holiday destination. Santa's year-round residence lies in the Arctic village of Rovaniemi, where the landscape is blanketed with snow and Christmas spirit oozes from its every pore.

In the village, a vast Christmas Exhibition features items and multi-media showcases of Christmas traditions from around the world, and there's even a Santa theme park, where sleigh rides, a giant snow globe, an ice gallery and even an elf school will keep the kids (and adults) thoroughly entertained. Here, you can bake gingerbread cookies with Mrs Claus; watch Santa's elves at work in their workshop; and see if you can spot Rudolf among Santa's herd of friendly reindeer. There's even a Santa Claus Post Office, where you can stamp your postcards with the much-revered Arctic Circle postmark or request a special letter from Santa Claus to be sent to your home. 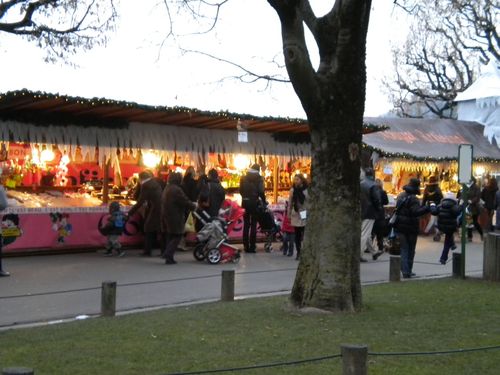 With its snow-capped chalets, vast icy lakes and alpine scenery, Switzerland is a natural winter wonderland come Christmastime. Samichlaus, the Swiss Santa Claus, pays a visit to many of the country's festive Christmas markets, but his most idyllic hideout is at Montreux's mountaintop Christmas village, overlooking the iconic Lake Geneva, the Bernese Alps and the famous Mont Blanc Massif. Wrapped up warm in his ubiquitous red hat, Santa takes up residence in a cozy log cabin at the top of the Rochers-de-Naye mountain at 6,700ft (2,042m).

Take the cogwheel railway from Montreux to the summit, where you'll be able to meet Santa's faithful reindeer, stroll around the twinkling Christmas market, make your own traditional wax candles and stock up on Santa's favorite snack - delicious spiced gingerbread. Make sure you've been good, though - Santa's mean sidekick, Schmutzli, is ready to dole out a bundle of sticks to those who've misbehaved. 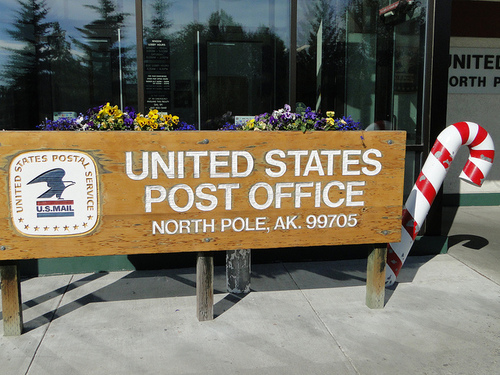 Legend dictates that Santa Claus' hometown is at the North Pole and back in the 1950s a team of entrepreneurial Alaskans renamed their town the 'North Pole' in his honor. It's not just the name though, the entire town aims to bring your festive fantasies to life, with streetlamps fashioned like candy canes, trails of reindeer hooves dotted through the snow and glittering Christmas lights hung from the shop fronts.

Visitors can meet the "world's largest Santa," a 42-foot statue; wander down Santa Claus Lane; watch the elves hard at work in Santa's Workshop; get their postcards stamped with a North Pole postmark and even take a spin in Santa's sleigh. Of course, Santa and his reindeer are in residence all year round, huddled in the warmth of the Santa Claus House, where piles of mail simply addressed to Santa Claus, North Pole, Alaska have made it to their destination. 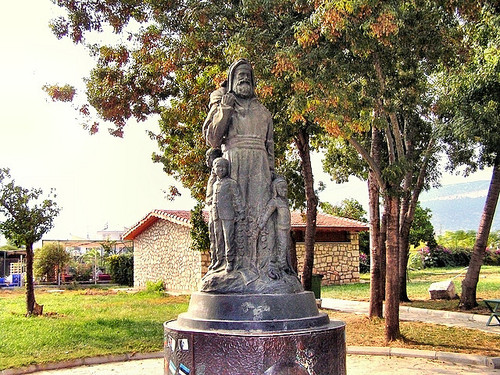 The inspiration for the modern-day Santa Claus, St Nicholas was a 4th century Greek Christian bishop whose immense generosity earned him the unofficial title as the Saint of Christmas. While the red-suited fellow gets plenty of attention in Turkey, too, it's his predecessor St Nicholas who is revered as one of the country's proudest ancestors, hailing from the ancient Lycian region.

Take a journey through the history of Santa Claus, with a visit to St Nicholas' birthplace, Patara; marvel at the St Nicolas statue in Demre, where the St Nicholas Church is a popular pilgrimage site, housing a collection of restored medieval frescoes detailing the life of St Nicolas. You can even see some of the Saint's bones in the Antalya Archeological Museum. 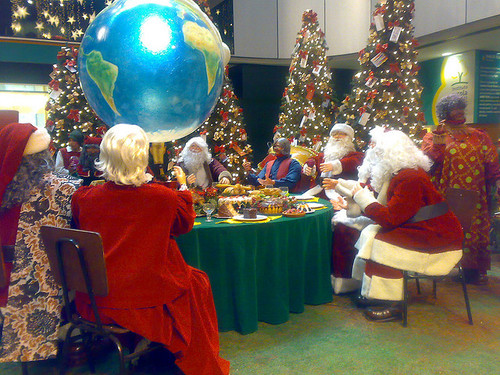 With all those thick layers and that famously bushy beard, Santa must have a tough time surviving the humidity of the Southern Hemisphere. Luckily Papai Noel -- the Brazilian Santa Claus -- has it sorted. Dressed in a lightweight silk suit in his trademark fire engine red, Santa, who is said to live in Greenland most of the year, makes a few stylish appearances through the holiday season.

Traditionally, Papai Noel arrives to greet his adoring fans a few days before Christmas at the famous Maracanã soccer stadium in Rio de Janeiro, flying in by helicopter above the world's largest floating Christmas tree, before singing carols and dishing out candy to the kids. Keep your eyes peeled if you head to the beach on Christmas Day, too -- Santa is often spotted surfing the waves of Copacabana beach, dressed in his full attire. 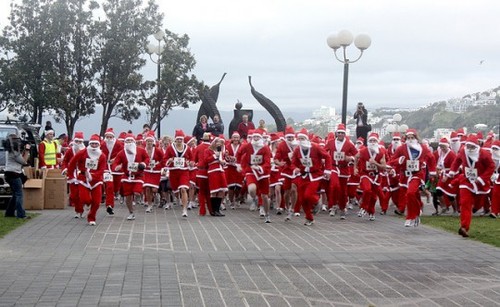 If one Santa just isn't enough, how about a convoy of hundreds of Santas, all undertaking a five-kilometer run in full suits and beards? The Great Santa Run is held annually in Edinburgh, Scotland, and Nottingham, England, where you'll have a tough time spotting the real Santa amidst his many followers. Organized by the When You Wish Upon A Star children's charity, the sponsored runs help to raise funds for the disadvantaged children around the UK, but if you can't make to one of these locations, don't worry. A number of similar Santa-themed marathons are held around the world, but it's Derry in Northern Ireland that holds the Guinness World Record for the largest Santa gathering, with an incredible 12,965 Santas in attendance! 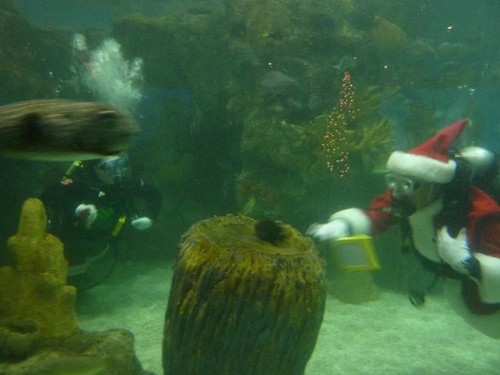 When he's not dashing through the snow and squeezing himself down chimneys with a sack full of presents, what do you reckon Santa's hobbies are? Tobogganing, perhaps? Or skiing? Toy making and carving gingerbread houses? Scuba diving?

As implausible as it may seem, on his annual visits to Japan, Santa Claus ditches the snow for the waters at the Osaka Aquarium Kaiyukan, where he undertakes daily swimming sessions for six weeks over the festive season. For the most unique Santa experience, time your visit for one of his five daily swims, where you'll get to see Mr. Claus suited and booted (or rather, finned), snorkeling with the tropical fish; handing gifts to the best behaved dolphins and even braving a swim with the whale sharks. 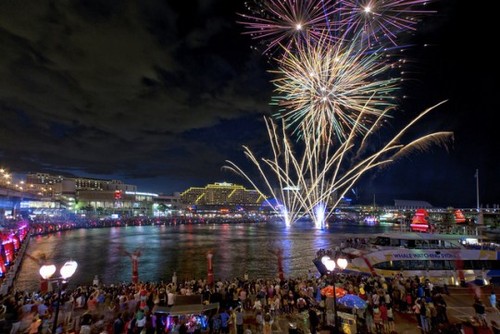 Sydney gets some serious Santa fever at the end of November each year, when the city's annual Santa Fest hits Darling Harbour. There will be Santa hats and shiny belt buckles all around, as Sydney-siders gather along the waterfront to celebrate the turning on of the city's Christmas lights. Santa imposters will be stilt-walking along the promenade; waterskiing along the ocean; and paragliding overhead, but the arrival of the real Santa is the focal point of the day. Ditching his flying sleigh for a vintage 1930s boat, Santa will be sailing into the harbor and bringing with him a spectacular evening fireworks display and lightshow. After soaking up the applause, Santa will light up the Christmas tree, join in some festive karaoke and dish out plenty of surprise gifts to the kids. 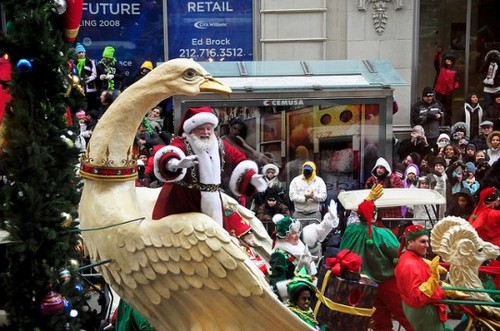 Out of all his grottoes, winter wonderlands and sleigh rides around the world, the famous Macy's Santaland must surely be one of Santa's favorite retreats. New York City's most renowned Christmas installation, Santaland features an entire North Pole "village," with a train taking children through an enchanted forest of talking trees; a wonderland of giant candy-canes and ice-skating polar bears; a dramatic display of motorized model trains; and glittering Christmas trees heaped with presents. Santa arrives by sleigh as part of the Macy's Thanksgiving Day Parade and makes himself comfortable on his ornate throne in his grotto, where he spends his days posing for photos with his guests and even joining some of them for a special Santa breakfast. 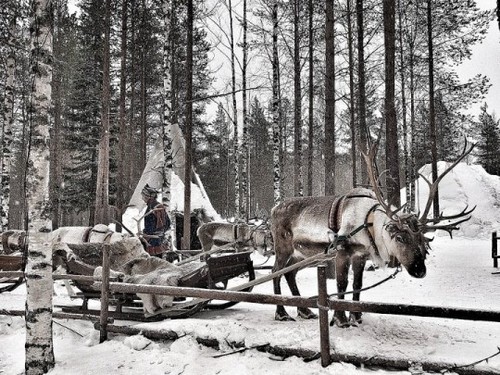 For more than 50 years the North American Aerospace Defense Command has been tracking Santa's whereabouts from December 1 up until his epic round-the-world sleigh ride on Christmas Eve. The brainchild of a cheerful phone operator who decided to play along when children started ringing the wrong number for a department store's "Santa hotline," the Santa tracker is now an annual undertaking run by festive-minded volunteers. Those hoping to sneak a peek at Santa, can follow the NORAD Tracks Santa website, for his coordinates in the run up to the big day.

Here are 25 places to spend Christmas around the world