Now, I don't know about you, but NONE OF THOSE ARE A REALISTIC OPTION FOR ME.

Not even the personal trainer/nutritionist/chef/life coach/sacrifice/hopping bit... mainly because I am really tired of the whole "idolizing virginity" thing... which is saying a lot, because I truly adore anything that gets me hopping on my non-dominant foot.

Hoo, boy... the stories of carefree hopping I could tell!

If you have ever been pregnant, given birth, know someone who has, or seen a tabloid magazine (on accident or on purpose), then you are familiar with the line of questioning and general obsession regarding women's post-baby bodies.

We are bombarded with advice, ads for "tummy tamers," diet suggestions and stories of celebrities who were back in their bikinis just four hours weeks postpartum. 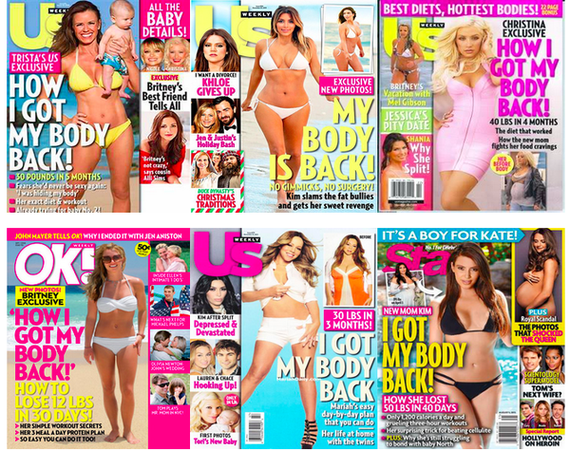 This messaging -- that unless you drop the baby weight, hide your stretch marks, tone up the loose skin, and meticulously maintain your vagina you are the worst kind of slacker -- is beyond demoralizing, it's downright dangerous.

Let's look at this some more:

Your body isn't flawed, it's rebuilding.

I have heard pregnancy described as a race, as well as a climb up a mountain. Me, however? I like to think of it as a temperamental, tantrum-throwing construction company (stay with me now) who was contracted to complete a project on very little budget and with a very tight deadline.

The construction team not only has to put together a whole new human from The Little Sperm Who Could and #166 of 300,000 Viable Eggs, but it also has to make all of the materials as well. Then there's constructing the temporary living space (amniotic sac and fluid), the food supply chain (umbilical cord), waste removal and filter system (placenta), and constructing the future feeding system (mammary glands). If its a healthy pregnancy without any complications (read: schedule delays), great! If not, well, that will cost you extra... often in the form of hormonal shifts, medical conditions, hospitalizations, and more.

Finally, around Week 40 of the construction project, the team has had enough; the lack of adequate pay (sleep), the weird food (seriously, ten salami and mayo sandwiches in one day?!), and the movements of Project Baby demolishing the living space, the team throws an epic fit and forcibly ejects the baby, tearing down all of the peripheral projects at the same time.

Here's your mini-human, just as you asked, sorry it's bald and covered in goop.

The only thing is, with the construction company gone (seriously, I promise this analogy is almost over), you're left to DIY with a demolished building and absolutely no budget (again, sleep) with which to rebuild... and a super demanding Little Bundle of Eats All The Time While Simultaneously Shitting Itself who is dependent on you for everything but breathing (but your brain will tell you that you're needed there, too).

The last thing on your mind should be getting back (if you were ever there) into a bikini, seeing your toes when you peer down over the painful boulders formally known as Your Breasts, or anything other than recovering from the previous nine months and loving on that creature in your arms.

As if a damn muffin top were the end of the world.

Your body isn't coming back.

To continue with everyone's favorite analogy...


Whether it has been weeks, months, or as some experts suggest, up to two years since the birth of your child, the foundation of your building just isn't the same... and it isn't going to be.

Muscles have been stretched, in some cases elongated to the point of no return, bones have been shifted, fat deposits have accumulated in places seemingly unrelated to pregnancy... and that all adds up to a body that cannot get back to exactly as it was before, for better or worse.

But is that a bad thing? I mean, hey, that was a huge amount of work, making that Tiny Midnight Demon! Yes, there will likely be things you aren't fond of (for me, it's how I still need to pee ALL THE TIME), but there will be some amazing things, too. For me, I have hips now! I have strong arms from carrying my babies around! I have huge boobs (which I happen to love)!

Besides, our bodies are used to change; remember puberty? Speaking of huge boobs, I remember going to bed one night and, when I woke up the next morning, I needed a bra.

I kid you not. Ask my mother, she'll tell you all about our trip to K-Mart.

The point is, this obsession with "getting our bodies back" after childbirth is so very beyond damaging. It's unrealistic, it's careless, and it once again places all the importance on making sure we look good and don't offend anyone with our freaking muffin tops, jiggly arms, and stretch marks when we should be highlighting the warning signs of postpartum depression and removing the stigma attached to admitting we need help.

If you know someone who recently gave birth, try asking them how they would best like to be supported instead of commenting on their appearance. By shifting the focus away from perceptions and back towards who the person really is, we can help make the transition into motherhood a little bit gentler.

Be sure to wear clean underwear,

More:
postpartum bodyMotherhoodParentsfatPlus-Size
Newsletter Sign Up
Raise the kind of person you'd like to know
Subscribe to our parenting newsletter.
Successfully Subscribed!
Realness delivered to your inbox