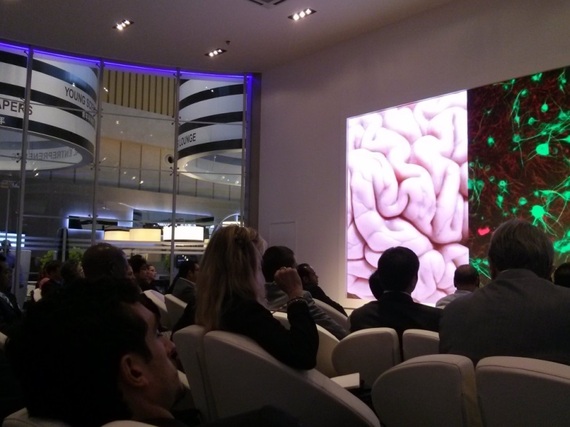 Last month I had the fortune to join over 1,900 pioneers from 90 countries at the World Economic Forum's Annual Meeting in Tianjin, China, to discuss how innovation can improve the state of the world.

Throughout hundreds of panels, workshops, private meetings and social gatherings, we examined how to deal with climate change, how to invest in public infrastructure, how to better regulate financial services, and dozens of other pressing topics. In addressing these issues, everyone -- independent of nationality or discipline - brought to the table our most precious asset: the amazing Human Brain.

During stimulating and captivating sessions we explored the new frontiers in neuroscience. A prominent focus was around how emerging neurotechnologies, such as those enabled by the White House BRAIN Initiative, will help detect and record brain activity in unprecedented detail and, therefore, revolutionize our knowledge of the brain and the mind.

In parallel, high-ranking government officials and health experts convened to brainstorm about how to "maximize healthy life years." The conversation revolved around physical health and promoting positive lifestyles, but was largely silent on the subjects of cognitive or emotional health. The brain, that key asset everyone needs to learn, problem-solve and make good-decisions, and the associated cognitive neurosciences where so much progress has occurred over the last two decades, are still largely absent from the health agenda.

What if existing brain research and non-invasive neurotechnologies can be applied to improve public health and well-being? How can we begin building better bridges between existing science and technologies and the real-world health challenges we're facing?

Good news is that a transformation is already underway, albeit under the radar. As William Gibson eloquently said, "The future is already here -- it's just not very evenly distributed." Indi­vid­u­als and insti­tu­tions world­wide are expected to spend over $1.3 bil­lion in 2014 in web-based, mobile and biometrics-based solu­tions to assess and enhance brain func­tion. Growth is poised to con­tinue, fueled by emerg­ing mobile and non-invasive neu­rotech­nolo­gies, and by con­sumer and patient demands for self-driven, proac­tive brain care. For exam­ple, 83% of sur­veyed early-adopters agree that "adults of all ages should take charge of their own brain fit­ness, with­out wait­ing for their doc­tors to tell them to" and "would per­son­ally take a brief assess­ment every year as an annual men­tal check-up."

Advertisement
These are 10 priorities to consider, if we want to improve health & well-being based on the latest neuroscience and non-invasive neurotechnology:

If we want every citizen to adopt more positive lifestyles, especially as we face longer and more demanding lives, it is imperative that we better empower and equip ourselves with the right cognitive and emotional resources and tools. Initiatives such as those above are a significant start to view and treat the human brain as an asset to invest in across the entire human lifespan, and to truly maximize years of healthy, functional and meaningful living.

Let's strengthen existing bridges -- and build needed new ones -- to improve our collective health and well-being.

-- Alvaro Fernandez, named a Young Global Leader by the World Economic Forum , is the Producer of the 2014 SharpBrains Virtual Summit (October 28-30th, 2014), designed to discuss these priorities, and many more.