By Ivy Jacobson and Jeff Wilser for TheKnot.com

Not to blow your mind or anything, but "Wedding Crashers" will be 10 years old this year! Even so, the movie has been inspiring and empowering crashers for almost a decade, which is why these tips for how to pick uninvited guests out of the crowd are more useful than ever. 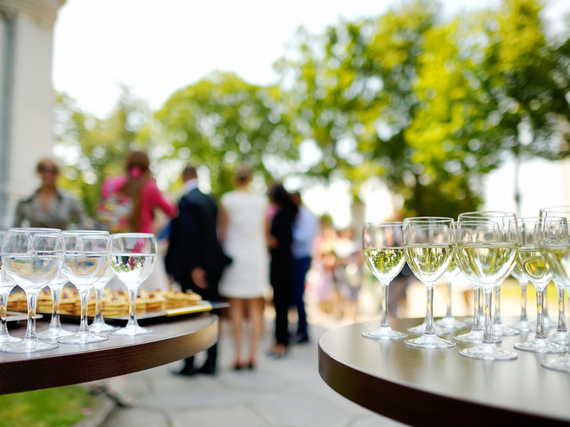 The wedding crasher is dancing with your grandma.
He'll dance with an elderly guest -- whose memory may be a little foggy, so she might assume he's a family friend -- and this will have the twin effects of: a) scoring instant credibility; b) looking charming in front of all the bridesmaids. Don't trust this guy.

The wedding crasher's personality is larger-than-life.
The go-to crasher trick: The ultimate Vince Vaughn/Owen Wilson-driven crasher fantasy is to bro-hug the groom, dance with the bride, catch the garter and then give a rousing speech (with a side of liquid courage). And you know as well as we do that at 99.9 percent of weddings, people you barely know don't really act like that. So if someone does, keep your guard up.

More from The Knot: 10 Lipsticks Perfect For a Summer Wedding

The wedding crasher came in late or pushed through the receiving line.
Crashers make their entrance at one of two times: a) boldly jumping into the receiving line, where people are too distracted to say anything; or b) joining the reception after the speeches, when the party becomes a free-for-all. Keep on alert.

The wedding crasher is a great faker.
The Crasher will have a premade alibi like, "I went to high school with Larry," and then back it up with, "You know, Laarrry, that craaazzzy ol' such-and-such!" and then good-naturedly clasp your shoulder, coasting on his charisma.

More from The Knot: How to Seat Your Wedding Reception Guests

The wedding crasher is never sitting down.
Something you just can't fake are seating arrangements and escort cards, so if the wedding has assigned seats, the jig is up. Unless, of course, he just never sits down. Time for dinner? He's in the bathroom, at the bar -- anywhere but at a table.

The wedding crasher seems to be dodging the wedding planner.
Your planner knows that guest list by heart and knows how to spot a crasher too, so you can expect them to not be hovering by anyone in charge.

The wedding crasher says he's a fifth cousin.
Not many couples invite such extended family members (unless it's a gigantic wedding). So chances are, he's probably not Philipo, the groom's fifth cousin who's been trout fishing in Alaska for the past few years.

The wedding crasher wasn't at the ceremony.
The crasher's here for the party, and there's no chance that he wasted time at your ceremony. (No offense!) So ask him questions about the actual ceremony, like, "Did you see the blimp that passed by overhead? So cool, right?" An actual guest would be confused; a crasher would play along, saying how much he loved the blimp.

The wedding crasher is a really good dancer.
What's the point of going to a wedding if you're not dancing, drinking and eating? Now imagine spending all of your weekends at weddings (that's what crashers do). You're going to pick up a few moves -- and you're not going to be shy about jumping on the dance floor when you hear "Sexy and I Know It." Remember, it takes a certain confidence to crash a wedding, after all.

More from The Knot:
7 Dos and Don'ts For an Adults-Only Wedding
What to Write in a Wedding Card
The Worst Things You Can Say to a Bride and Groom
Wedding Guest Attire Cheat Sheet